A brief history of modern Britain in two bridges 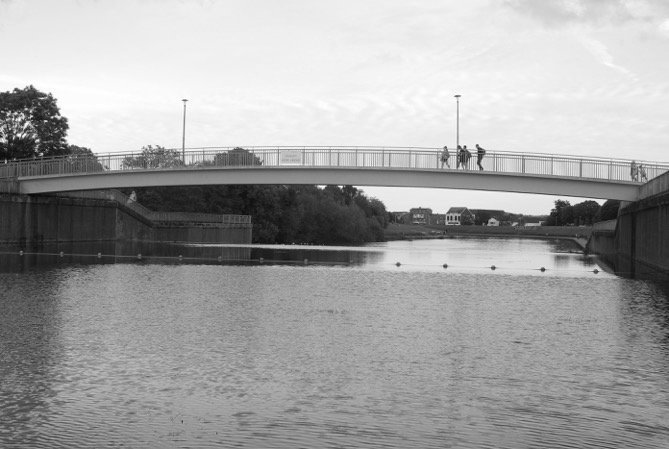 AS pedestrians and cyclists in Exeter make their way over the flood relief channel and then the River Exe itself they are crossing two bridges which represent a society that has somehow been transformed over barely 30 years.

Besides all the writings and philosophical treatises that a culture produces about itself, it also leaves an unwritten history in the objects and structures that it made. As well as the function, the form of these objects reveals, albeit often inadvertently, much about the nature and the preoccupations of a culture. The BBC radio series History of the World in 100 Objects brought this phenomenon to light, but it is not confined to the dusty artefacts of long-vanished civilisations. It’s happening now.

In the 1970s, Exeter solved its centuries-old flooding problem by creating a flood overspill channel parallel with the Exe to take the excess water which had made citizens’ lives in neighbouring Exwick and St Thomas a nightmare of trepidation every winter. It also confined the river as it passed through the city’s principal crossing point. The concrete works containing these channels were necessarily big, and many commentators at the time felt them to be rather brutal in appearance. But this was a scheme designed to work well rather than look pretty and those whose properties were now protected from an annual fear of inundation had no complaints.

The footbridge over the channel was built at this time. Its simple profile seems to reflect a society which is content to believe in science and technology’s ability to produce efficient solutions.

One of the core tenets of 20th-century design was that form should follow function. Linked to this idea was the belief that the more efficiently a structure solves a problem, the more elegant and beautiful it will appear to the eye. So it is with this bridge. The gentle, arching shape produces a structure which is stronger than a horizontal beam of the same dimensions. This allows the cross-section of the supporting steel work to be smaller and lighter than if it were flat, contributing to the bridge’s simple elegance.

Fast forward to the much later bridge over the river itself. This was completed in 2002.

This attention-seeking contraption looks as if it were designed primarily to catch the eye and win an award at one of the many mutually back-slapping competitions held by people spending other people’s money. It really couldn’t be more different from the other bridge and the reason is inescapable. The society which produced this structure had itself been transformed out of all recognition. Now we were living in a world obsessed with narratives, symbolism and entertainment-value.

This bridge, with its huge concrete, fake mill-wheel suspended from what looks like a ship’s derrick, is said to ‘reflect the history of the river’. It has been named Miller’s Bridge, although the collection of buildings housing the mill with which it attempts to associate itself has long been a restaurant.

The result is a theatrical, narrative-driven vanity project which, given its location alongside the original, modest but entirely functional bridge, really does exemplify the rather swift descent of our society from one driven by logic and rationality to one basking precariously on a froth of false nostalgia and childish novelty.