A day of protest and the power of pictures 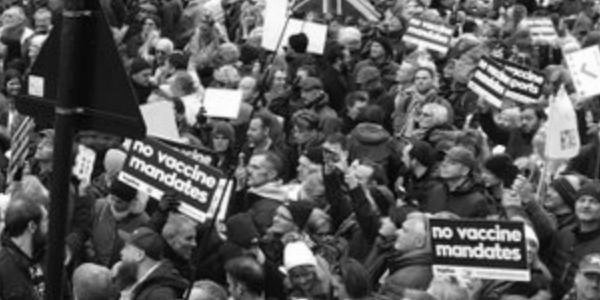 A PICTURE paints a thousand words. And Twitter, whatever else you may think about it, proved its power, and gave us power, from the moment Janis Krums posted one of the first photos of the US Airways plane that crash-landed in the Hudson River in 2009. From that moment every man became a reporter, never mind what the mainstream media chose to cover.

So here, thanks to ‘phone’ photography, is our photo story of Saturday’s World Wide Freedom Rally in London, which was joined by the NHS100K march, meeting outside the BBC at 1pm. That’s when I arrived at Portland Place, which was so overwhelmed with people you could hardly move.

Nothing could show this more dramatically than the exclusive and iconic picture Anna Brees managed to secure to taken from Broadcasting House itself:

For the following couple of pictures my thanks to the kind man standing high above me who I handed my phone to:

What made this march particularly powerful was the presence of so many NHS workers protesting against the vaccine mandate and their threatened sacking:

But don’t be under the impression this was a lone voice, as Richard Taylor’s tweet, ‘wow, we salute you’, at this visual statement of protest demonstrates

And here we are – the TCW girls if I dare call us that – Sally Beck, Bridget Jones 2022 and yours truly, making our statement:

More of the huge crowds that had gathered – thanks again to Anna Brees:

And here is Alan Miller, the founding father of the Together Declaration, https://togetherdeclaration.org/ addressing the crowds – just how politics should be!

Finally, my favourite images of the day: