A psychic surge? Who saw that coming? 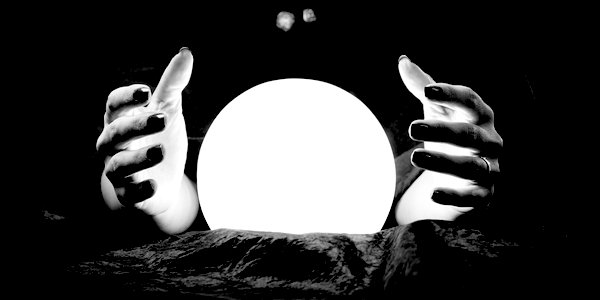 AH, the mist is clearing. I see legions of figures, troubled and torn by strife. They hunch over keyboards, feverishly Googling. Then their restless souls wander through cyberspace, desperately seeking solace and strength . . .

Or, to put it in plain English, loads of people are now going online with a view to consulting psychics for advice in these crazy, mixed-up coronavirus days.

Basically, I understand psychics to be people who can allegedly predict the future, see into your soul and tell you all about yourself, or perhaps communicate with the dead.

But a quick glance at the internet shows they offer a dazzling variety of services, ranging from divination to dowsing, levitation to telepathy, and lots of other weird and wonderful skills ending in -is, -ism, or -ance.

The surge in psychic-seeking is highlighted in a survey which says Birmingham is the UK’s most ‘spiritual city’, with 1,440 people searching online for psychics every month. Glasgow is second with 1,030 and Bristol claims third place with 850.

Quite why Brummies are leading the quest for ethereal guidance is hard to fathom. Maybe there’s some primeval force radiating from Spaghetti Junction, like one of those ancient stone circles. Or perhaps they’re simply trying to find out if Aston Villa really will sign Milot Rashica from Werder Bremen.

However, calling these psychic-seeking locations ‘spiritual’ seems an odd choice of words. You’d have thought the churches might be claiming ownership of that particular designation. Then again, maybe not in these days of woke worship and right-on religion.

(Just don’t mention this psychic boom to the Archbishop of Canterbury. Before you could say ‘Mystic Justin’ he’d probably be polishing a crystal ball to show how inclusive he is with the clairvoyant community).

The big question, of course, is do psychics really have extraordinary powers, or are they just having us on?

I don’t suppose it matters as long as people get something positive back from their consultation – and I bet most do, especially since they’ve probably shelled out good money for it. After all, a psychic who told a client: ‘I’ve seen your future and I’d give up now if I were you’ would soon be out of a job.

On a wider perspective, it’s probably all part of the long, slow retreat from traditional religious belief. In days gone by, anyone wanting advice about the future would probably have consulted a priest rather than logging on to ISeeaTallDarkStranger4U.com.

Again though, does it matter? In the end, most of us are just looking for meaning, hope, happiness and fufilment in our lives and will seek those things where we think we can find them.

So I’m reluctant to say that belief in psychics is just a load of crystal balls. But if I did consult one, I wouldn’t want to trouble him or her with predictions about life and love, etc. This week’s winning lottery numbers would do to be going on with.