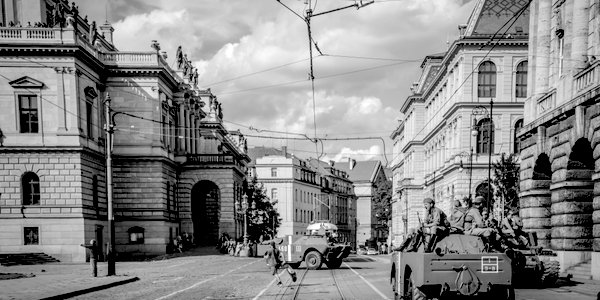 Fifty years ago today, half a million Soviet and Warsaw Pact troops, supported by five thousand tanks, were pouring into Czechoslovakia in a massive demonstration of power. Czechoslovakia was a Soviet satellite, but it had been showing dangerous signs of independence. This could not be allowed. Attempts to gain freedom must be crushed.

In the preceding few years, the Czechoslovak Communist Party had strayed from the path set out by its dominant Soviet partner and allowed a loosening of political control in the country. It had become open to dangerous reformist ideas and was trying to create a different kind of socialism, ‘socialism with a human face’. How far this process would have gone had the Soviets not intervened we cannot know. Giving freedom to the people sits oddly with any Communist regime. Yet the party under the leadership of its First Secretary Alexander Dubcek seemed genuine in its commitment to bring freedom, some degree of democracy and increased living standards. Making Dubcek a remarkable thing: a Communist leader that we should actually remember with some respect.

The Soviets saw all this as an intolerable threat to Communist order. After months of negotiation, pressure and threats, using overwhelming force, they finally intervened to reassert their authority.

The brutality that sat beneath the ‘fraternal relations’ and supposed mutual co-operation of the Warsaw Pact, the alliance that linked the ‘People’s Democracies’ of Eastern Europe to the Soviet Union, was now exposed. The image of Communism, particularly for its parties in Western countries, was tarnished. Though it does seem incredible that as late as 1968 there were still many who had not yet noticed the true nature of Soviet Communism and its long history of tyranny and repression.

The events in Czechoslovakia sparked debate across the western Left about how to bring prosperity and freedom to ‘the masses’, though the obvious solution of simply accepting liberal capitalism unfortunately escaped many.

As the historian of Communism Robert Harvey points out, in 1968 a Czechoslovak worker, whose class nominally owned the factory where he laboured, would have had to work for ‘around 117 hours to earn enough money to buy a transistor radio’, the must-have consumer item of the day. A West German worker, suffering under the exploitation of his capitalist employers, needed only 12 hours.

And despite the Marxist nonsense of alienation, surplus labour value and all the rest of it, goods made in socialist factories would never match the quality of goods produced in capitalist ones.

When the Soviet invasion came, the Czechoslovak people stood with their government. United by old-fashioned patriotism, they flooded out on to the streets to show their defiance.

Only 12 years before, the Hungarian people had faced similar Soviet aggression, but they had decided to fight. At least two and a half thousand Hungarians were killed, but in military terms, their heroism barely scratched the invader. Dubcek’s government wisely kept its army confined to barracks knowing that armed resistance would mean disaster. Broadcasts on Radio Prague urged non-violent action only. Nonetheless, at least eighty were killed and perhaps a thousand wounded by Soviet fire as the soldiers swept the crowds aside to seize their targets. No one can doubt the courage of the Czechoslovak people standing in front of Soviet guns and blocking tanks with their bodies.

We shouldn’t forget those brave patriotic people. If Highgate Cemetery can have a memorial decorating the grave of that ghastly brute Karl Marx and Manchester can have a statue to his sidekick Engels, we should have something to commemorate some of the victims of their ideology.

Britain has two memorials to Czechoslovakian heroism in the Second World War. One is in Leamington Spa, once home of the Free Czechoslovak Army, the other in Brookwood, Surrey, dedicated to the Free Czechoslovak Airforce. Perhaps we need a third, to honour those who lost their lives in 1968, who stood up for the freedom of not just their own country but all of us.