NewsPaperthe art of publishing
HomeLaura PerrinsA salute to Tobias Ellwood, the man who won’t walk on by
163

A salute to Tobias Ellwood, the man who won’t walk on by 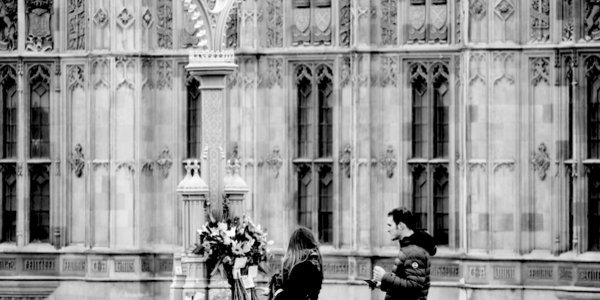 Tobias Ellwood MP is a man who proves that not all heroes have capes. Mr Ellwood gave mouth-to-mouth resuscitation and CPR to Constable Keith Palmer, who was fatally attacked in the Westminster terrorist attack. He stayed when others fled. He remained with PC Palmer in the face of what could have been a secondary attack.

I had the privilege of appearing on Question Time with Mr Ellwood more than a year ago.

He has a very strong sense of right and wrong and of good and bad. No doubt that is the reason why he decided to tweet the now infamous video of a bully knocking a young Syrian refugee at his school to the ground and pouring water over his face. I tweeted at the time that tweeting a video of minors where faces were revealed was not appropriate and could stir up a mob. Mr Ellwood was challenged on this on Newsnight on Wednesday. It is a very interesting watch.

Defending his action, Mr Ellwood said: ‘I worry that we are becoming a “walk on by” society where we’re allowing space for these things to happen. We saw another event on the 17th of September where a female police officer was dragged across the ground. What did people do there? They laughed as they recorded it on social media. Cars drove by without stopping. That is absolutely wrong. It’s that that I want to challenge. It’s that that I want to change.”

When challenged on retweeting the video, he replied: ‘You seem to be condoning this behaviour. This is absolutely wrong. Somebody head-butting another child. Where does this bully get these ideas from? That is the question that we all need to pose ourselves. Let me explain.

‘My little boy went to pre-school. Day one and he came back with a black eye. When I asked how he got this, he said he stepped in for his friend who was being beaten up by somebody else. Now I can’t tell any parent what they should do with their children.’

Personally, I think the idea of pre-schoolers beating up other pre-schoolers to the extent that one boy ends up with a black eye is pretty shocking, but this has received zero media commentary.

Mr Ellwood continued: ‘I can’t ask anybody what conversations should be had. What I’m saying is we should all ask ourselves, “How is it that it’s becoming the norm, with social media, to record these things, find them funny and amusing, and walk on by?” That is the piece that I want to challenge. And that’s what I was seeking to do by actually putting it out on social media myself.

Later Mr Ellwood said: ‘You’re right to mention the vigilantes. They’re arguably as bad as the bullies themselves, and have taken these matters into their own hands. And you’re also right to say I hope the majority of us do not participate in this behaviour. The point though is, if the majority of us walk on by, we’re ignoring the problem. We need to own the problem and solve this. We can only do that if we move on from this walk on by society.’

The brutal truth is that Mr Ellwood is old school: he is never the man that walks on by. That much we know. The problem for Mr Ellwood is that it is dawning upon him just how vacuous the culture is these days.

He says: ‘Let’s get back and understand what our values are and defend them.’ But just what are those values? That’s the key question. Mr Ellwood didn’t have a chance to articulate them on Newsnight but it clearly does frustrate him that people ‘just walk on by’.

So he is raging against a culture of passivity. He is demanding courage and decency but what he doesn’t fully appreciate is that with the collapse of masculinity we will not be getting these qualities back any time soon. This is what you get with the emasculation and feminisation of men caused by feminism.

People do walk on by now, probably because they are quite reasonably afraid of being knifed. I would certainly tell my husband to walk on by even if it was bunch of teenagers involved. In fact, especially if it is a bunch of teenagers fighting in London, as they will inevitably be ‘tooled up’. So, I absolutely demand that my husband walks on by instead of risking his life and leaving his kids fatherless.

And it is not just strangers walking by strangers. Heck, I did a whole blog on how male Canadian students meekly walked out on their female classmates when a nut-job told them to, leaving the women to be murdered in cold blood. The men also did nothing while the nut-job went on a further killing spree. That was thirty years ago and things have only got worse since.

Mr Ellwood also said: ‘Let’s get back to making sure that when kids grow up they know the difference between good and bad so this sort of thing doesn’t happen.’ Indeed, teaching kids to know the difference between good and evil is the most important thing a parent can do. The most important thing, bar none. And yet, what do the government and educational establishment obsess over? Exam grades. Parents fight tooth and nail to get their kids into a school with successful exam results (and I have sympathy for this, I really do) but how much thought do they give to the ethos of the school and the values it will instil in their children? In many cases, not enough.

As for popular culture – well, the less said about that cesspool, the better.

So I salute Mr Ellwood in his quest for a society that no longer walks on by, a society comprising men and women (but mostly men) who are courageous and selfless. Sadly, however in the current culture this will not be easy. There are just not enough men like Tobias Ellwood MP to go around.