A second referendum would be undemocratic, dirty and rigged

AT THE beginning of this month, conventional Westminster-watch wisdom had it that the so-called People’s Vote (whose were those 33million votes cast on 23rd June 2016, I wonder?), aka Second EU Referendum, was dead in the water. The inquest was in full swing.

The Labour leadership effectively killed it by refusing to back a Commons amendment for it, complained alleged ‘Conservative’ and Leave-Remain flip-flopper Sarah Wollaston. Accept it, we’re done with it, wrote Iain Martin in The Times: whatever air was actually left in its balloon has escaped. 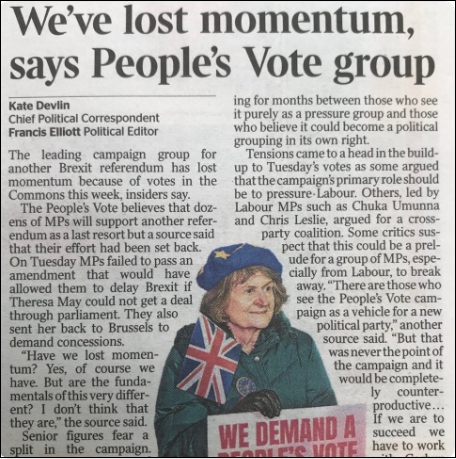 But then again, maybe not. During the last ten days or so, the campaign appears to have sprung back to life. The underlying reasons are debatable, but little doubt exists in my mind that they have been boosted by Theresa May’s combination of slipperiness and intransigence towards her own MPs but contrasting weakness and appeasement when facing the Brussels negotiators, which TCW co-editor Kathy Gyngell described comprehensively here on 8th February.

It seems highly likely that May’s latest Commons defeat last Thursday, by 303 votes to 258 – the direct result of her insistence on amalgamating the previous week’s non-binding Spelman amendment demanding the exclusion of No-Deal with the main Government motion endorsing its desire to get the Northern Ireland backstop removed from her ‘Withdrawal’ Agreement and replaced, causing her ERG MPs to abstain and so bringing about that defeat – has re-emboldened the People’s Vote campaign.

If it ever really went away. On 3rd February, the SNP’s Joanna Cherry revealed that she had been, and still was, ‘working very closely’ towards a People’s Vote with ‘Conservative’ Continuity-Remainers Dominic Grieve and Justine Greening. The Guardian has been reporting how campaigners have been insisting that the fight is not over yet.

Articles from supposed Leavers-turned-Remainers demanding a second vote have started to reappear in Remain newspapers. Campaigners are talking about a ‘breakthrough’ in the struggle to secure a second referendum. A ramping-up of the rhetoric in The People’s Vote Twitter feed is definitely discernible, culminating in plans for a march and demonstration on Saturday 23rd March, just six days before our supposed departure date.

It's time for any Brexit deal to be put to the people. Sign up for the #PutItToThePeople march & RT this now: https://t.co/z4hWRpcCPT pic.twitter.com/SNiTEHYhVW

If it takes place, a second Brexit referendum will be the dirtiest, most rigged campaign in British political history. First, the franchise will be a target. I suspect there will be a drive this time to allow nationals of EU member-states residing in Britain but not on the Electoral Register to vote, which in 2016 they rightly were not. Predicting accurately which way they’re likely to vote isn’t especially hard.

I suspect also that there will be a repeat of the 2015-16 attempt to extend voting rights to those aged 16 and 17. Remember, last time this was foiled only by the determined resistance of Tory Brexiteer backbenchers, who saw it for the blatant gerrymandering attempt that it was. Given the prevalence of Remainer opinion within secondary and higher education common-rooms, forecasting correctly which way 16- and 17-year-olds would vote isn’t especially hard either.

Which prompts the thought that maybe there was more to the timing of last Friday’s pupils’ ‘climate-change’ protest than we assumed. Even if most were relishing the chance of a Friday bunk-off organised by teachers with an apparently easy access to Socialist Worker anti-capitalism, anti-Tory placards, images of politically-woke young people on a shouty demo can be a useful tool if you’re campaigning to include 16- and 17-year-olds in a new Brexit vote.

The referendum ballot-paper question would be rigged. Rather than a binary choice between Remain and Leave as in 2016, some campaigners have made little secret of their desire to see one where there would be two Leave options – No-Deal/WTO or Theresa May’s BRINO-Deal, but only one Remain option. It doesn’t need a mathematics PhD to work out the likely result of that. Just 34 per cent could decide the winning option. How is that legitimate? 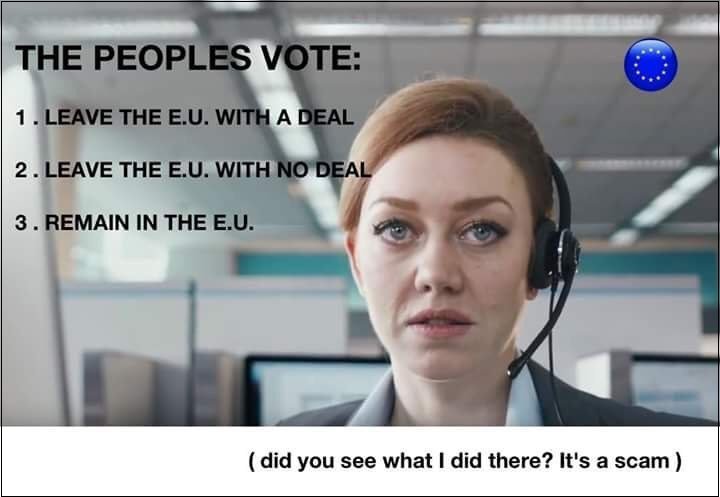 The combination of two major changes in the make-up of the electorate asked to consider essentially the same referendum question in under three years, the skewing of the question’s terminology, and the attempt to procure a different decision before the first one had even been implemented, would be enough reasons to call the legitimacy of it into question, but there remains one even more powerful than that.

Trust is the overarching basis on which, in a representative democracy, politics rests. For any referendum to be legitimate, those who vote in it must have trust that its outcome will be respected.

That was certainly the case with the EU Referendum of 2016. The Cameron Government itself, despite campaigning unashamedly for Remain, went out of its way to emphasise the momentousness, born of infrequency, of the event – ‘a once in a generation decision’. Even more importantly, it committed itself to obeying the instruction of the electorate, which it had itself voted to ask them to give it – ‘the Government will implement what you decide’. 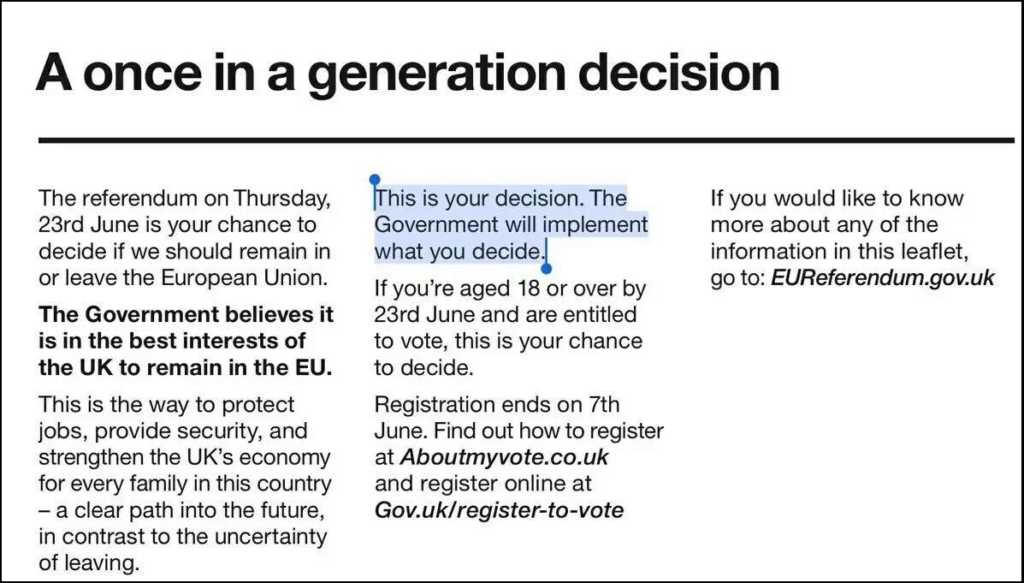 On that basis, it’s beyond question that the 2016 EU Referendum was legitimate in the sense that the participants in it expected, and trusted, its outcome to be delivered. And this is true of both sides: would the Remain campaign have outspent the Leave campaign by the considerable margin that it did, and called in every favour from every acronymed international organisation it could think of, if it seriously expected the Government to say, in the event of a Remain victory, ‘Sorry, but we’re leaving anyway’?

But as we have seen, and has been comprehensively chronicled at TCW and elsewhere, the Parliament which voted by 544 votes to 53 to ask the British people for an instruction has spent the two-and-a-half years since it was duly delivered doing its utmost to delay, dilute, ignore or reverse it.

If the democratic outcome of the first referendum can be so blatantly set aside in favour of a second, participants in a second referendum can have no confidence whatsoever that its outcome would somehow be implemented if it was equally uncongenial to those charged with implementing it.

Any assurances to this effect that the 2016 losing side are giving with respect to a possible 2019 re-run are not worth the paper they’re written on, and should be treated with the disbelief and scorn they deserve. No trust in them is possible. A second referendum would be devoid of any democratic legitimacy, and is reason alone to oppose it as much as we can.