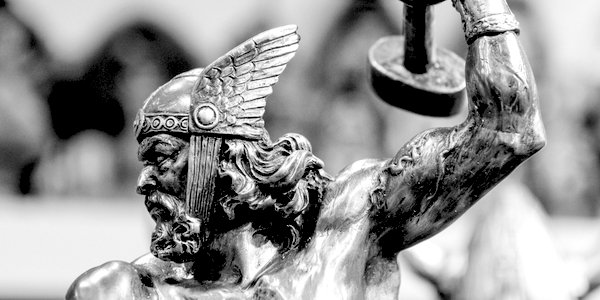 THE Odinist Fellowship is celebrating a new Royal Mail stamp depicting the Norse god Thor – as depicted by Marvel Comics – to be issued next month. Fellowship director Ralph Harrison said: ‘Considering how the Christian Church tried so hard to eliminate the images of the gods, it is with some satisfaction that we will be seeing people of all religions and none who use this stamp acknowledging in a small way the god Thor’s continued presence in our nation’s cultural life.’

Yet the Odinists worship at a Grade II-listed former almshouse from the Tudor era in Newark-on-Trent, Nottinghamshire – a relic not of paganism but of Christianity, which taught humanity the worship of the weak. In contrast, paganism is all about the worship of the strong, as indicated by Marvel’s image of Thor as a muscle-bound superman.

Thor’s ‘continued presence in our nation’s cultural life’ is seen mainly in the name Thursday, while the founder of Christianity has whole seasons dedicated to Him, as well as Sunday. Odinists may argue that Christianity is declining, and rising levels of blasphemy may reinforce this impression – but as G K Chesterton remarked, nobody ever bothers to blaspheme against Thor.