Adam Smith’s critics are economical with the truth 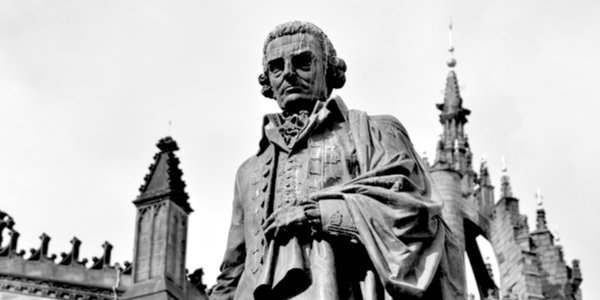 RECENT events prove how destructive and widespread cancel culture is and how determined neo-Marxist-inspired activists are to rewrite history and undermine and denigrate what is best about Western civilisation and societies, including Australia.

The most recent example involves Adam Smith, the renowned 18th century economist and philosopher who was one of the leading lights of the Scottish Enlightenment and whose highly influential book The Wealth of Nations revolutionised the study of commerce.

In its endeavours to appear woke and appease the Black Lives Matter brigade, Edinburgh City Council has formulated a list of monuments and sites associated with historic racial injustice and slavery. Adam Smith’s grave is on the list.

The only problem, apart from the error of judging the past according to what is now considered politically correct, is that Adam Smith is on record as opposing slavery. As argued by Matt Kilcoyne of the Adam Smith Institute, he condemned those guilty of being involved in the slave trade.

Smith was clearly sympathetic when stating what ‘miserable life the slaves must have led; their life and their property entirely at the mercy of another, and their liberty, if they could be said to have any, at his disposal also’.

Other examples of cancel culture include university buildings renamed, the school curriculum rewritten to expose alleged white supremacism and even science being condemned as racist and guilty of supporting colonial oppression.

Academics at the University of Sheffield are happy to argue that ‘UK science is inherently white, since the discipline developed from the European scientific Enlightenment. Crucially, science was both a fundamental contributor to European imperialism and a major beneficiary of its injustices’.

In addition to being historically inaccurate when it comes to accusing the West and figures such as Adam Smith of racism, the ideologues are selective by not acknowledging that the Islamic empire was based on military conquest and slavery for hundreds of years. The African slave trade originated with Muslims.

While there is no doubt that many Western figures, such as the 19th century mining magnate Cecil Rhodes, were guilty of exploiting and mistreating blacks and that the British Empire was involved in the slave trade, it is also true that the British led the campaign to abolish slavery across the globe.

As detailed in David Kemp’s The Land of Dreams, it is also true that Australia was not founded on slavery.

Kemp writes in relation to Governor Arthur Phillip, leader of the First Fleet: ‘His expectation and desire, and the direction of the British Government, was that the laws of England would apply in the new land.’ As evidence Kemp includes a quote from Phillip’s journal: ‘There can be no slavery in a free land and consequently no slaves.’

Another of the early colonial governors, Lachlan Macquarie, also opposed slavery and while sometimes responding to Aboriginal violence with equal force did all in his power to help and assist the indigenous population by providing education and welfare.

There’s no doubt there is much about Western civilisation and Australia’s evolution since the establishment of the penal colony in 1788 that merits criticism. At the same time it is essential to get the history right and to stop interpreting the past through what is now defined as politically correct and ideologically sound.

Based on freedom indexes and surveys, Australia tops the list as our political and legal systems inherited largely from the United Kingdom are based on concepts including popular sovereignty and the separation of powers, the inherent right of all to liberty and freedom and the presumption of innocence until proven guilty.

We need only look north to communist China, Laos PDR, Cambodia, North Korea and Vietnam where authoritarian dictators rule based on fear and violence to realise we are indeed the lucky country and that our ancestry is worth celebrating.