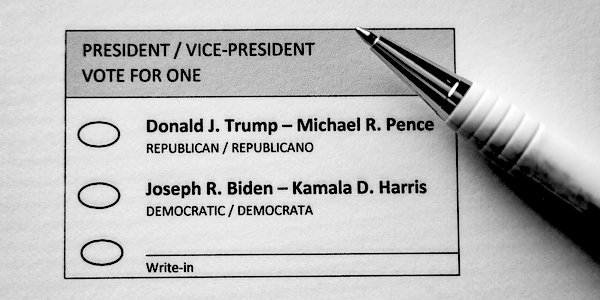 VOTING for the next US president takes place today after frantic last-minute campaigning by both candidates. The timing of the result, however, is as unpredictable as the outcome itself.

President Donald Trump will lose the popular vote – the RealClearPolitics average of the polls shows Democratic nominee Joe Biden ahead by 51 per cent to 43 per cent – but he doesn’t need to win it. The presidency hinges on the electoral college votes of the Midwest battleground states and Florida where a few thousand votes out of the millions cast nationwide will be decisive.

The results in the battleground states which Hillary Clinton unexpectedly lost to Trump in 2016, if they are as tight as expected, will be fought over in the courts, delaying the anointment of either man for a fraught and fractious period that could last days or weeks.

First, the mechanics of the process. Each of the 50 states organises its own vote and the count. They must complete their count and certify the result by December 8. Their electoral college delegates cast their votes on December 14 and congress ratifies the president on January 6. The winner needs a minimum of 270 college votes. He takes office at noon on January 20.

Some in the media with an addiction to melodrama have speculated that the election count may be so heavily contested that there’ll be no result by inauguration day in which case the Democratic speaker of the House of Representatives, Nancy Pelosi, will become president pro tem. She is 80, even older than Biden and Trump who are 78 and 74 respectively. Biden would be the oldest president ever to take office.

The last contested outcome was in 2000 when the Supreme Court gave victory to George W Bush over Al Gore on December 12 after a fight over a few counties in Florida. The court battles this time could involve large swathes of the nation and again finish up in the Supreme Court.

There are officially 290million eligible voters and a turnout higher than 2016’s 55 per cent is expected as a result of the anti-Trumpers’ fervour to end his uniquely Barnum & Bailey presidency. Trump’s base are equally motivated to give him four more years of driving liberals mad. Both candidates have unusual flaws and there’s no telling which way the independent hold-your-nose vote will break.

A record 93million early votes have been cast, mostly by Democrats eager to be rid of Trump, according to the media. Trump could actually be ahead after the voting today but see himself gradually overtaken as the mailed votes are tallied. This will complicate the ability of the media accurately to track the trends that usually let them predict a winner within hours of the polls closing.

All Republican presidents since Dwight Eisenhower in the 1950s have been vilified mercilessly by the media, who believe that power belongs to Democrats by divine right, but none so relentlessly as Trump. Senior Democrats and media figures have fantasised about his being defeated and then prosecuted but have not so far specified what his crimes are. After Russiagate and impeachment, this need not be the problem it seems at first sight. The Nuremberg defendants were accused of crimes invented for the needs of their trial. But I digress.

Some 56 per cent of Americans say they are still better off under Trump than they were under Obama and Biden despite the damage inflicted on the economy by the Covid crisis. The third quarter GDP results issued on October 29 showed the economy rebounding strongly. The discrepancy between these figures and voting intentions indicates how rancorous some voters feel about Trump personally.

Both candidates campaigned hard in the final days, particularly in Pennsylvania which their strategists think will bethe key battleground state. Some polls give Trump a one-point lead and he warned that if outcomes are close ‘we’re going in with our lawyers’. Democrats, of course, are equally geared up with lawyers of their own.

Trump got an unexpected boost in Pennsylvania on Saturday from the Pittsburgh Post-Gazette which endorsed him, a first by the paper of a Republican since 1972. Like so many endorsements of Trump, it was back-handed.

The editors wrote: ‘We share the embarrassment of millions of Americans who are disturbed by the president’s unpresidential manners and character – his rudeness and put-downs and bragging and bending of the truth. But we believe Mr Trump, for all his faults, is the better choice this year.’ You see what I mean about people holding their nose.

Never-Trump historian Richard Brookhiser, who is also a senior editor at the conservative National Review, said he wouldn’t vote for either man but made sure everyone knew why he had it in for Trump.

‘Donald Trump’s ignorance, laziness, malice and buffoonery have poisoned an already rancid national discourse, hobbled his associates and allies and distracted from their accomplishments,’ he wrote. He said other Republicans could have done what Trump did.

My opinion is that Brookhiser is so blinded by his snobbish hatred of Trump that he is completely wrong. Trump won the nomination in 2016 because a majority of Republicans believed that none of his rivals would have done what Trump promised and carried out. They would have governed like Democrats like all other recent Republican presidents.

Brookhiser’s is a typical Washington elitist view that is out of step in a party whose current support comes from middle America and voters without college degrees, of which Brookhiser probably possesses more than he can count.

Biden, the promised unifier, has meanwhile maintained until the end his penchant for gaffes. At a campaign stop in Minnesota, which is in play after the George Floyd riots, he responded to heckling by Trump supporters from their pickups by referring to ‘those ugly folks over there beeping their horns’. It sounded like an echo of Hillary Clinton calling Republicans ‘deplorables’ in 2016.

Biden has promised to tax trillionaires, of whom there is none. Not even Amazon boss Jeff Bezos, the world’s richest man, comes close. It was a slip which Biden corrected but typical of his lack of coherent grasp despite being swaddled in a cosseting campaign.

He has never responded to plausible evidence, under investigation by the FBI, that his family traded on his name and office to take money from Ukrainian and Chinese interests when he was vice president.

Hotair‘s Karen Townsend wrote: ‘It is almost painful to watch Biden drag himself across the finish line in this campaign. His short campaign speeches are filled with lies and gaffes.’ The media usually attribute the monopoly on lying to Trump.