All aboard BoJo’s Ark 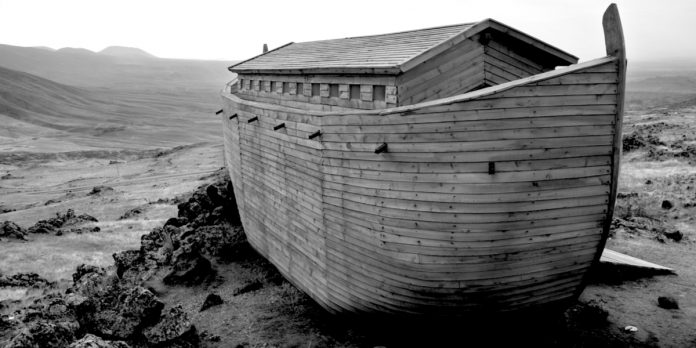 WITH warnings by the Climate Scaremongers that whole towns and villages may be wiped off the map by rising sea levels, a radical shift in Government policy is under way, TCW can reveal.

A leaked Whitehall document says all plans for building further flood defences or trying to mitigate the effects of flooding will be scrapped because of the unsustainable multi-billion-pound costs. Instead, a ‘sensible’ new policy will be introduced.

In a scheme compared to the distribution of Anderson bomb shelters to millions of homes during the Second World War, householders under threat of rising sea levels will be issued with plans for small self-build survival craft based on the ark built by Noah in the Book of Genesis.

It is said a ‘BoJo’s Ark’ can easily be constructed in a few weeks by anyone with basic DIY skills. Householders must provide the wood, but those on supplementary benefits will receive vouchers to be redeemed at B & Q for hammers, saws and nails.

These are some of the specifications . . .

Dimensions: In the Bible, God gave Noah measurements in cubits, and he ended up building an ark 500ft long, 75ft wide and 45ft high. It is conceded that even some British shipyards might struggle to build such a whopper these days.

Householders are advised to restrict their BoJo’s Ark to a size that will accommodate only their nearest and dearest, plus storage for food and other essentials. They are assured that using feet and inches instead of metric will no longer leave them liable to prosecution.

If space is getting tight, they are warned it may involve making tough choices. ‘For instance, is Uncle Silas nearer or dearer to you than several catering packs of Hobnobs?’

Materials: The Almighty was a bit vague on this point, telling Noah to use ‘gopher wood’. No one is quite sure what gopher wood was – it could have been anything from cedar to cypress. So the choice of wood is up to the householder.

However, with new timber now shockingly expensive, it is suggested that householders demolish their soon-to-be submerged garden sheds and recycle the tongue-and-groove planking. Or they could rip out the naff Seventies-style varnished wood panelling around their baths.

They are warned to avoid chipboard, which will soak up water like a sponge. This is reinforced by speculation that ‘gopher wood’ in the Bible was a mis-hearing, and God was instead saying ‘go for wood’.

Waterproofing: God told Noah to cover the ark with pitch, which was probably a gooey mixture made from tree resin. Official advice is to pop down to B & Q and buy a sealant that does exactly what it says on the tin. If a tin of Ronseal can be found which says: ‘Perfect for sealing your BoJo’s Ark’, so much the better.

Animals: Following Noah’s example, householders would ideally be taking along two of every living thing of all flesh, including fowls, cattle and every creeping thing of the earth. After consultation with the Archbishop of Canterbury, official guidance is that God will not mind if they take no more than a dog and/or cat, plus possibly a budgie or, even better, a dove. If householders insist on including a creeping thing of the earth, they are recommended to invite Tony Blair aboard.

Supplies: Noah was drifting for about five months before the waters receded and the ark beached on Mount Ararat. Global geophysical inundations of the sort the Climate Scaremongers are warning about tend to last a bit longer, so boatbuilders are advised to take along enough Pot Noodles for about 100,000 years.

Disclaimer: While the Bojo’s Ark is thought to comply with all current health and safety standards, the Government cannot be held responsible for acts of God.

Share
Facebook
Twitter
WhatsApp
Email
Previous articleDo we need a referendum to free us from the lunacy of the human rights court?
Next articleDon’t call him Boris – he’s not your pal, he’s a cult