NewsPaperthe art of publishing
HomeNewsAndrew Cadman: The Davos elite has its head in the clouds
24

Andrew Cadman: The Davos elite has its head in the clouds 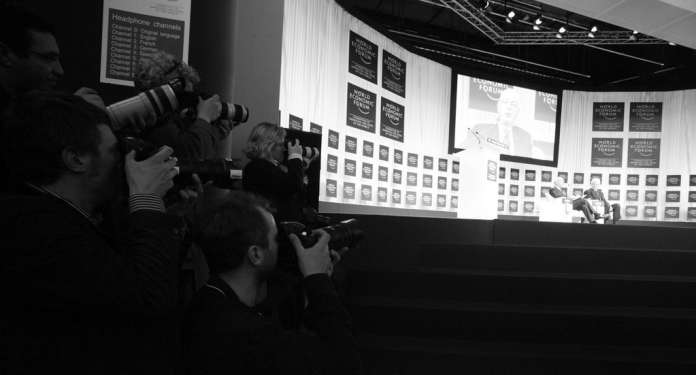 It’s Davos time again. That time of year when all the mega-rich, the movers and shakers, the Illuminati and suchlike congregate to conspire against the rest of us. I can exclusively reveal to TCW readers, via agents who have passed this sensational information at risk to their lives, that masterminding this year’s gathering is none other than Ernst Stavro Blofeld. Furthermore he has managed, Boys From Brazil style, to clone both himself and his white cat 97 times. He will therefore be chairing every session concurrently – with his cat, of course.

It’s easy to laugh at conspiracy theorists. Too easy, perhaps: those of us who believed talk of the “New World Order” and the like was strictly for tin foil hat wearers were humbled and silenced by the Remain campaign during last year’s Brexit referendum. Here really was an international conspiracy of the most heinous kind – an attempt to bully and intimidate one of the world’s oldest democracies and a free (ish) people into eternal subjugation. Of course we can take some reassurance from the fact those involved proved so poor at it as evidence they haven’t had much practice, and get up to this sort of thing much less frequently than the more paranoid would have us believe. Either way, they plainly thought we were too thick to see the devices, as one elite figure after another popped up to remonstrate with the British people in perfectly choreographed fashion. It was like whack-a-mole with Savile Row tailoring.

So in one sense we shouldn’t be too concerned: the exclusivity of these events may stoke our fear and envy, but I’m willing to bet that Davos, Bilderberg and the like are like any other conference, just with a few more noughts added onto everything. There are no grand conspiracies, but that does not mean these occasions are not extremely dangerous to the rest of us in a far more subtle way.

It’s not conscious conspiracies we have to worry about, but subconscious ones: so much of how we relate as humans comes from subconscious understandings and assumptions that by definition we no longer question. Even in meetings between people who do not know each other that well this will be the case, and among people really who meet regularly subconscious assumptions increase markedly over time, reaching a point where human beings know each other so well they can often act efficiently as a team with barely any formal discussion at all.

Engagement in a formal conspiracy is quite different. Imagine you were hatching some dastardly and highly intricate plan to subvert or manipulate a situation to your advantage. As you worked it all out with you co-conspirators, it would require a quite unusual degree of both self and mutual awareness: a baring of all your thoughts, fears and dreams. No matter how monstrous your arrogance, how Machiavellian your purpose, or how high the stakes, you would therefore be aware at some conscious level that it may all come to nought. That is much easier to come to terms with than the falsification of assumptions held at the subconscious level, which can feel almost as difficult as being asked not to breathe. We actually saw this in the aftermath of Brexit, where those Remainers actively involved in conspiracy just moved on with barely a shrug. However, Brexit proved a terrible and unimaginable shock to others who had plainly never imagined Britain leaving the EU was a realistic possibility.

It follows that what is acutely dangerous about the international gatherings of the uber-elite is not the conference agenda or any secret breakout sessions, should they actually exist, but the small talk: as they discuss over their Kopi Luwak coffee how John James Junior coped with the double blacks at Vail this year, or how Jemina did at the Badminton Horse Trials, just like anyone else such people form subconscious bonds of mutual understanding. Spend too long in that kind of rarified company and you cease to understand that any other reality exists at all. No wonder the elites spectacularly failed to spot the social conditions that made Brexit and the election of Donald Trump happen, and no wonder they still find the gathering revolt all so hard to fathom.