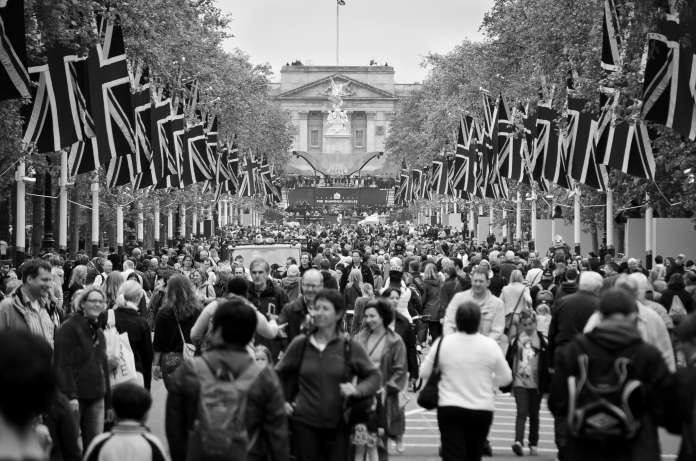 Life begins at forty, so they say, but whether society can be sustained by lives at forty plus is another matter. Last week it was announced that despite a huge net influx of immigrants, the average age of the UK population had reached forty for the first time ever. As we all know, we are in the middle of huge demographic shifts caused by acombination of sustained low birth rates, increased longevity and mass immigration. This cannot be without huge cultural implications, perhaps even more profound than those that shook society in the 1960s. Currently social liberalism is master of all it surveys, but will its ascendency be sustainable in future, or will social conservatism make a comeback?

As shown in the graphs below, the now rapid greying of the UK population is hugely influenced by the baby boom that took place roughly between the mid 1950s and 1960s. This has been followed by a very prolonged“baby bust”: by 1973 the total fertility rate had fallen below replacement level of 2.1 babies per woman, where it has stayed ever since, falling as low as 1.6 babies per woman in the early years of this century. Since then, fertility has recovered somewhat, largely to the greater fecundity of first and second generation immigrants (26 per cent of births in 2013 were to foreign born mothers).

Live Births by Year In The United Kingdom. Source: Office of National Statistics 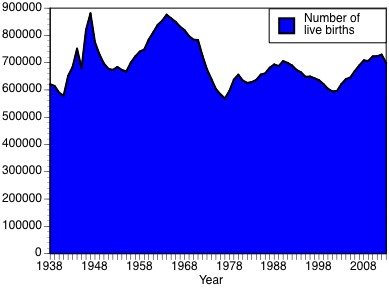 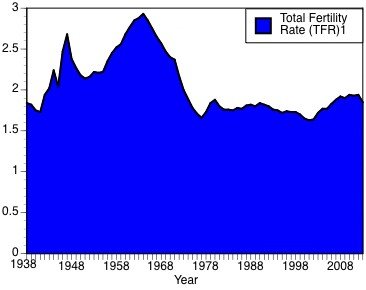 *Defined as the average number of babies born to women between 15-44 years of age.

The great concern for society is whether economic and social progress is sustainable as the large number of people now in their 40s and 50s move towards retirement age, where, due to substantial increase in longevity, they will have to be sustained for decades by the numerically smaller generations that follow.

The answer to that question relies on three factors: (1) the nature of jobs available in the work place; (2) birth rates within various socio-economic groups; (3) the nature of immigration.

We all know we live in a knowledge economy where it has become increasingly difficult for people with poor skills or intellectual abilities to prosper. In the second machine age, robotisation and artificial intelligence are expected to eat ever further in the lower-skilled jobs market, but at the same time afford great opportunity to the intelligent, particularly those gifted in maths. In such circumstances, it would plainly be best for society if most children were being born into those family demographics with most wealth, education and high levels of social capital.  However, in fact there seems to be little difference between family size and socio-economic status, and considerably worse levels of social capital in lower income groups due to the collapse in marriage within these demographics. Although more investment in training and better education may help ameliorate matters, it seems likely that an even larger proportion of people will struggle in future.

The picture becomes considerably worse when it comes to factoring in immigration: thanks to our membership of the European Union, we are subject to a mass of immigrants competing in the low skilled jobs market. To make matters worse, at the same time we continue to export large numbers of highly skilled people, largely to those countries that retain a sane skills-based immigration approach.  (The resulting desperate skills gap, as much as political correctness, is perhaps behind government attempts to force more and more mothers into work and increase female participation in male-dominated areas such as IT and engineering.)

From the point of view of the bottom half of society, existing trends could hardly be worse, and something plainly has to give. Social liberalism and the culture of narcissism that accompanied it were made possible by the mass prosperity of post-war society. Its tenets are still perfectly possible to adhere to if you are amongst the elites, but not among the ever greater segment of society finding themselves squeezed by a combination of poor prospects, poor social capital, pressure on jobs and services provided by low-skilled immigrants and the costs of caring for a rapidly ageing indigenous demographic.

Just as the post-war conservative establishment seemed entrenched long after deep cultural trends had started moving decisively against it, so now liberalism is now far more vulnerable than it appears. Although wave after noisy wave of liberal triumphalism continue to break on our cultural shores, underneath it all, the tide is perhaps at last beginning to turn.