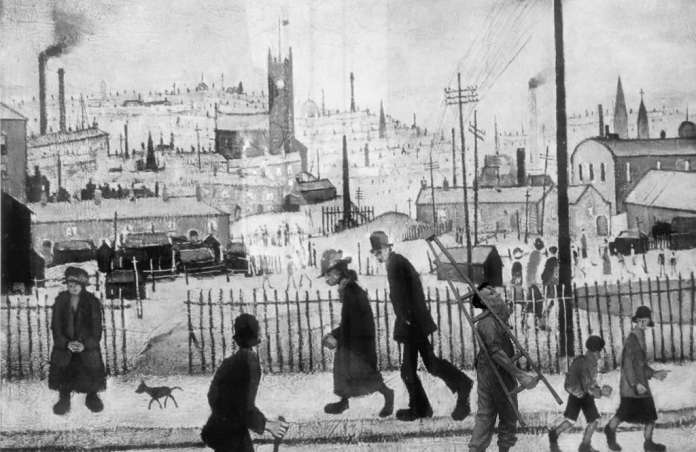 As a young boy in the early 1980s I was once taken to the top of Wincobank Hill in my native Sheffield, overlooking the Lower Don Valley. Well past its prime even then, it was still an immensely impressive sight, with low, long buildings stretching to the horizon, steam and white smoke rising lazily from the jagged rooftops. Stainless steel was invented there, and all the male members of my family on my mother’s side worked in the industry.

There was something so intoxicatingly elemental about it all, and still is in those few places where pockets of heavy industry remain. To me, the illuminated majesty of Stanlow at night matches the beauty of any landscape in the Kingdom. Of course one shouldn’t over romanticise the past: it was a very harsh and often cruel existence for the multitude that laboured. You only have to study any L. S. Lowry painting to see that: his matchstick men all stooped forward, browbeaten, as though averting their gaze from the brutality of their environment. All that said, it was not an existence bereft of dignity or meaning. In contrast, there is something profoundly unfulfilling about our culture today: effete, false, un-masculine.

Perhaps that is why the closure of great steelworks like Port Talbot affect us so strongly: yes, all those jobs lost and lives damaged invite genuine empathy and sorrow, but it goes even deeper than that. Today our lives are incomparably richer in so many ways, but in another sense not quite as real.

So much seems intangible and ephemeral – virtualised, in a word, rather than made of steel.