NewsPaperthe art of publishing
HomeNewsAndrew Tettenborn: HS2 is a pricey ego trip for the suits
36

Andrew Tettenborn: HS2 is a pricey ego trip for the suits 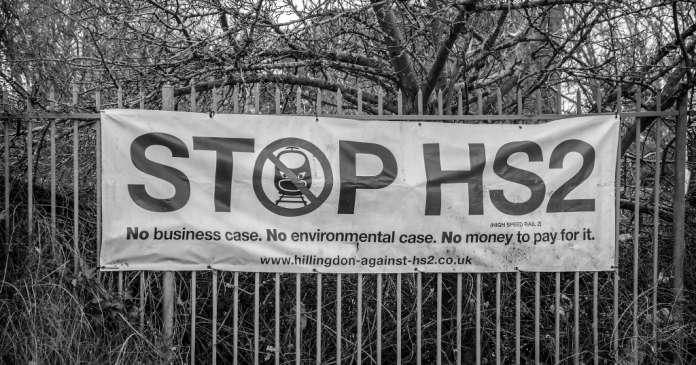 My name is Ozymandias, King of Kings;

Look on my Works, ye Mighty, and despair!

Nothing beside remains. Round the decay

Of that colossal Wreck, boundless and bare

The lone and level sands stretch far away.

When HS2 was promoted, you (dear reader) were meant to think in terms of a benign, green, state-of-the art transport scheme to whisk you in speed and comfort to Birmingham and beyond and incidentally push prosperity to Preston, Penistone, and even possibly Pontefract. Ah, innocence! True, HS2 was to run a railway; but more interestingly, it was intended in addition to be a jumbo real estate developer.

Under s.48 of its enabling legislation as drafted, it was empowered to buy land far and wide – compulsorily of course – for “regeneration”. You can see why: a veritable flock of birds could be killed with just one discreet stone. The real estate arm could quietly shovel money into the railway side, hiding just what a bottomless money pit the latter was. Westminster and Whitehall government big-shots could discuss grand development projects over other people’s land in plush hotel lounges with local government fat cats and major property companies (sorry, “stakeholders”), without having to worry about what the peasants might actually want to see done with their acres. And think of the chances for giving favoured MPs opportunities for pork-barrelling (aka “local infrastructure investment”)!

To the annoyance (one suspects) of the great and the good, last year the House of Lords Select Committee scrutinising the Bill smelt a rat and said this would not do. Through gritted teeth, the promoters of this exercise in State corporatism admitted defeat, and accepted that HS2 would indeed be a railway pure and simple rather than a version of Northern Powerhouse Monopoly.

This is unalloyed good news: but it means that one more prop for HS2 has been knocked away. It is worth thinking for a moment what advantages are left. We can leave on one side keeping up with the Joneses (or should it be the Duponts and the Garcías?) in France and Spain with their TGVs and AVEs; though it is worth pointing out that super-rich Switzerland, whose people travel more by train than almost anyone else, prefers to carry people comfortably and efficiently rather super-swiftly.

Super-fast premium travel city centre to city centre. Yes, but who will use it? London to Birmingham in 50 minutes is all very well. But leisure travellers won’t want it, and it’s not much use to the salesman from the small business who (if he doesn’t video conference) is much more likely to need to get from Luton to Bromsgrove, and to count the pennies as well. Of course, there are beneficiaries of the monstrous scheme, notably those who work in city centres and love to hold power meetings at someone else’s expense. Step up well-heeled lawyers and accountants, politicians and senior public sector functionaries. Now fancy that.

Freeing up capacity on the West Coast Main Line. Yes, but there is capacity elsewhere between Paddington and Birmingham. Not as exciting as the shiny new toy HS2, but it could undoubtedly be upgraded.

Meanwhile, no one dares estimate the cost of this superfast galumphing white elephant – £50bn in 2015 and rising (note that without a kilometre built £180 million has already been paid to pen-pushers, enough, for example, to redouble Oxford to Charlbury; Cotswold residents please note).

What we do know is that the cost of maintaining this new line will leave holes elsewhere. Pity your station in Essex is falling down and the track unmaintained: but we must keep self-important besuited businessmen on time on their vital power trips between London and Manchester.

On the other hand (memo to Ministers and MPs), spend half, a quarter, of this money on improving existing track, and you will please vastly more people who simply want a comfortable and reliable way to get from A to B. They might even remember it, and use it to travel to vote for you.