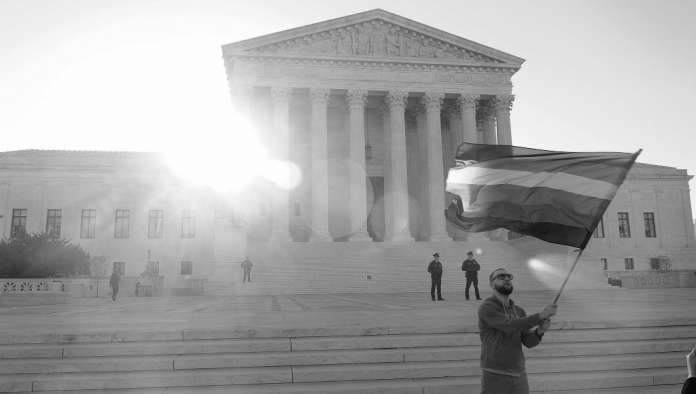 Imagine an institution polarised by politics, where, in a curious looking-glass version of the typical London club, left-leaning oldies harrumph at what the world will come to if their younger conservative colleagues are allowed to have their way. You guessed it: we’re talking about the US Supreme Court, complete with liberals in their late 70s and early 80s and conservatives for the most part in their 60s. Who is on this court matters enormously for social policy and for the welfare of America as a whole. Think abortion, religious freedom, election funding, free speech, labour relations, gun rights … the list goes on.

Last year Justice Scalia died. His replacement has to be appointed by the President, with the approval of the Senate. Donald Trump has now nominated Neil Gorsuch. A chorus of leftists predictably protest, and the Democrats, having had Barack Obama’s own nomination of Merrick Garland blocked in the Senate, promise trouble. But in this case Trump, whether you like him or not, merits our support, and he also deserves credit for more sagacity than a lot of people attribute to him. His nominee Neil Gorsuch is young, clever, personable and scholarly, with an Oxford D.Phil (more of that below): even left-leaning publications like the Washington Post haven’t been able to dig up much dirt.

More to the point, if he is appointed this will be a continuity appointment. Scalia was a conservative. Before he died the court consisted of four clear liberals (Justices Breyer, Kagan, Sotomayor and especially Ginsberg), four clear conservatives (besides Scalia, these were Justices Roberts, Alito and Thomas) and one not very reliable conservative (Justice Kennedy). For all his supposed moderation, Garland (who to be fair was intellectually top-notch and highly capable) was, as the left itself admitted, a paid-up liberal. Obama’s nomination was a cynical power-play, an intended present to the blessed Hillary of a court consisting of five liberals and four conservatives, one of these not entirely to be trusted.

Picture the joy of abortion enthusiasts, anti-gun zealots, union barons and other undesirables if it had succeeded. Whatever the motives of the Senate, we have to be grateful for what did not happen. By contrast, Gorsuch has played his cards close to his chest but on appearances is politically roughly where Scalia was. Appointing him, therefore, puts back the original balance, and moreover does so for some time (he is only 49, and the appointment is for life: something which terrifies leftists, for all their claims to speak for youth over crusty old age).

Not that you would know it from what we have heard and read over here, where (consistently with the visceral hatred of the great and the good for all things Trump) you might be led to believe that Gorsuch was envisaged as Trump’s poodle to sideline the Constitution and set up a dictatorship under the joint direction of the military-industrial complex and the religious right. The BBC World Service on Wednesday featured a termagant from left-wing pressure group moveon.org, who made no reference to Gorsuch’s character but without serious challenge toed the moveon line that any Trump nomination was a mere presidential catspaw and had to be opposed on principle.

The Guardian, as usual, excelled itself. It published a piece here suggesting (without any real evidence) that Gorsuch was an anti-abortion zealot doing Trump’s bidding, and sneered at his upholding of the freedom of committed Christians not to provide services contrary to their beliefs. But that was dwarfed by a seriously nasty piece of character assassination and suggested guilt by association which appeared in Friday’s paper. When at Oxford, Gorsuch had been supervised by the highly eminent legal philosopher John Finnis, who is strongly Catholic and as such has on principle opposed gay marriage. Under the headline “Oxford scholar who was mentor to Neil Gorsuch compared gay sex to bestiality” it suggested that Professor Finnis (now long retired) must have been a religious maniac, homophobe and bigot, and made it quite clear that readers might care to infer that for that reason Gorsuch might be unsuitable for the Supreme Court.

As a result of this tactic, which is otherwise beneath contempt, it seems the advice is now clear. If you want to get on in life, it’s never too early to take precautions: just make sure, even at university, that those who teach you have the right credentials to satisfy the egomania of the left-wing zealots of thirty years hence.