Another hellish week on the NHS front line 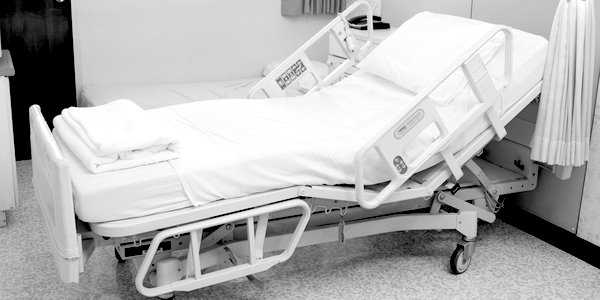 Here is the second in an occasional series by TCW writer Nick Booth, who is being treated for cancer.

MONDAY: You wouldn’t believe the little s**t that’s been moved into the bed next to me. His mate is sitting by his bed – despite it being well outside visiting hours – and he starts playing grime-drill, whatever it’s called, music at full blast. A nurse asked him to turn it down and he reacted like he’d been stopped and searched on his way to say Mass! He turned it down one decibel. His mate said something sarcastic to the nurse. So the Mashup continued. It was loud enough to annoy a senior doctor who came over and, at last, told him to turn it off or get some headphones as it was unacceptably noisy for other patients. So after some mumbling and tutting and sucking on his teeth, the little s**t agreed.

So the doctor goes back behind the screens to talk to the patient in the bed opposite and the entitled little s**t starts up. He was half shouting the c-word, repeated that a few times, then started saying, ‘He’s a w**ker. He can’t get p***y. He’s trying to impress that girl . . .’ All said loud enough to be heard by the doctor on the other side of the screens.

Little ‘bad boy’ got away with it too! He should be slung out for that. Now he and his mate are giving me looks! Not my fault he was badly brought up. I should have known he’d be trouble when his phone alarm went off all night and his dad couldn’t get him to switch it off.

Why the hell are people like this allowed to get away with it?

The minute he came in he was complaining that they hadn’t done his knee operation yet! Spoilt little sod! It’s always the ones who are allowed out-of-hours visitors who expect the best treatment.

TUESDAY: I’ve lent him my mobile phone charger and he likes me now! He’s a bit immature I think. Which is dangerous as he’s a volatile kid in a strong man’s body! I’ve heard him fantasise loudly about killing his nemesis ‘Kelvin’ in a rather depraved way. He did announce (in one of those conversations meant for everyone to hear) that he was going back to prison once he got out of hospital.

THURSDAY: I was released yesterday morning. I felt sufficiently rejuvenated to get the bus home, although I did feel massively weak and tired.

Said goodbye to Reuben (my new gangsta rap young offender friend) with the words ‘hope it all works out for you’. Although I’d like to point out I was not endorsing his threat to do something nasty to Kelvin with an electric toothbrush.

Sadly my elation at getting home was short-lived. I managed some clear soup with some white bread without falling ill. A packet of kettle chips followed without incident too.

I fell asleep for for an hour too, which raised my spirits. It’s impossible to sleep in hospital no matter how tired you are.

False confidence persuaded me to eat a bowl of pasta. This was too much for my bowel to take. My stoma is herniated and there are kinks in the bowel that cause very narrow gaps that food cannot pass through. The passageway is so narrow that even molecules of jelly have to line up to squeeze through one by one. So a bowl of pasta shells, once they’d re-grouped in my bowel and created a hard pasty bolus, would have as much chance of passage as a tennis ball. By 11pm on Wednesday night I was in so much pain I had to lie down. By midnight the pain surpassed anything I’d had before and I admitted defeat and called an ambulance. By 2am I was heading back to hospital.

Twelve hours later (yes, it takes that long to be processed in A&E) I was back in Fairfield ward but in the room next door to the one I’d left on Wednesday. Reuben was still in his bed with his mysterious civilian minders accompanying him 24 hours a day. But my bed had been taken over by another convict! Not a ‘bad boy’ like Reuben, but a middle-aged white man who was nevertheless dangerous enough to be accompanied at all times by TWO policemen!

So poor Reuben has two plods permanently stationed at the foot of the bed next to his! He won’t like that.

SUNDAY: The police are a permanent fixture on this ward. It must be so boring for them having to sit there all day. What a way to spend your shift!

I did cross Reuben in the corridor when we both tried to use the toilet at the same time. He didn’t recognise me and just scowled when I offered to let him go first!

I later heard him berating the nurses because he wanted to take a cab to the bank to get some money out so he could go spending at JD Sports.

I heard the convict joking with the staff at the desk that he does love his food. (The two cops were accompanying him while he took a trip to Marks and Spencer downstairs)

I’m so pleased for him!