Are angry Dutch farmers spearheading an uprising against the elites? 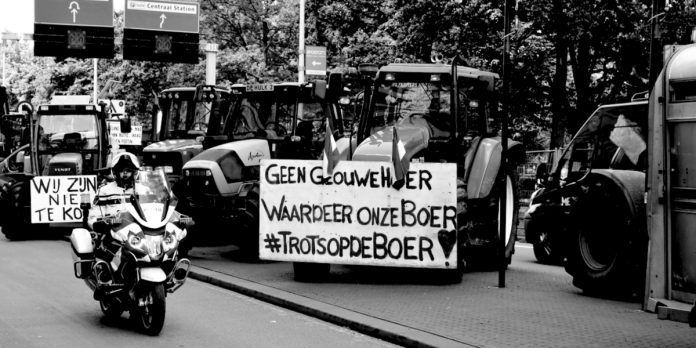 IGNORED in the media feeding frenzy over Johnson’s resignation were no fewer than 30,000 Dutch farmers who last week rose up in protest against new nitrogen emission limits set by their government and who are fast bringing their country to a halt. You would think it would be a lead new story, but no.

Only yesterday did any British mainstream newspaper pay attention to this huge story. The Independent took time out to tell its readers that ‘Anger simmers for Dutch farmers who oppose pollution cuts’.

That is not how social and alternative news media outlets have been reporting this drama. The Dutch government’s edict will require farmers to curb their nitrogen emissions so radically, by up to 70 per cent in the next eight years, that it will mean a massive reduction in the number of livestock they can maintain resulting in the loss of their livelihoods and, some say, a State take-over of their farms. It’s for this reason they have been blocking supermarkets, distribution centres and roads, a protest to which, shamefully, the police have responded with brutality, opening fire on tractor-riding farmers and arresting others.

Maybe large farming companies could, at least hypothetically, meet these (climate) goals but for smaller farms, often family-owned over several generations, these new environmental regulations are so extreme they’ll be forced out of business.

That’s why farmers are blockading roads and refusing to deliver their products to supermarket chains, and why the Netherlands is starting to suffer serious shortages of eggs and milk. The global impact is not without significance either. Just as so many people remained unaware until recently how dependent the world is on Ukraine for wheat and fertiliser, enlightenment is yet to dawn about global food dependency on the Netherlands.

In a rare (mainstream) article on the subject last week in Newsweek, Ralph Schoellhammer, an Austrian assistant professor of economics, explains that the Netherlands is the world’s second largest agricultural exporter after the United States. This country of barely 17million inhabitants is a food superpower. Given global food shortages and rising prices, the role of Dutch farmers in the global food chain, he writes, has never been more important: ‘But if you thought the Dutch government was going to take that into account and ensure that people can put food on the table, you would be wrong; when offered the choice between food security and acting against “climate change” the Dutch government decided to pursue the latter.’

It appears to be an extraordinary own goal, given post-lockdown supply chain problems and the impact of the Ukraine war, but such is the zealotry of these political climate ideologues that they are prepared to attack their own people, just as Pierre Trudeau did with the Truckers. Like Mao, they seem to have little regard for the cost in human lives and suffering in order to achieve their revolutionary goals. And a revolution it is, driven by global elites who can afford high food and energy prices.

Schoellhammer believes that ‘there is a growing resistance by the middle and lower classes against . . . the “luxury beliefs” of the elites, as everyday folks realise the harm it causes them and their communities’. Let’s hope there is.

Rebel News reporter Lincoln Jay, embedded with the farmers since last week, reporting back to Laura Ingraham of Fox News last Friday said ‘the farmers genuinely believe that this is going to destroy their livelihoods’. He believes ‘these new environmental policies are going to make it practically impossible for the younger generation here in the Netherlands to get into farming’.

You can watch the interview here.

In a more recent Rebel News report with Lewis Brackpool he says that the Dutch farmers are not backing down against ‘the authoritarian climate agenda of Prime Minister Mark Rutte’ who they describe as a World Economic Forum insider; and that the farmers’ rebellion is now countrywide, and has brought parts of it to a halt. In the northern town of Drachten, not far from the German border, they watched waves of farm tractors form a convoy along the A7 highway. In Leeuwarden, tractors blockaded government buildings, and farmers tried to confront provincial government officials.

Elsewhere it’s been alleged that that the Dutch minister who pushed the nitrogen law that grants the government the power to expropriate the farmers’ land has a brother whose online supermarket is one in which Bill Gates invested $600million. The Epoch Times reported yesterday that the Dutch Government’s strategy is even more invidious: that the plan is to take the farmers’ land and convert it into housing.

Rutte of course is not the only example of a government leveraging ‘climate change concern’ against specific segments of the economy and working people at a time when it will inflict maximum damage. The Western Canadian Wheat Growers have warned that Trudeau’s proposed fertiliser emissions reduction will devastate Canadian prairie farmers, with serious implications for the country’s food security. These also are the heartlands of conservatism in Canada that are targeted.

Whether the Dutch farmers will be the spearhead of what Schoellhammer predicts will be a ‘popular uprising of working-class people against the elites and their values that started with the Canadian Truckers and is crossing the globe’, only time will tell. He says the sympathies of the Dutch are not with their government, they are solidly with their farmers, and that polls indicate that the Farmers Political Party, formed just three years ago in response to the new regulations, would gain 11 seats in Parliament if elections were held today (it currently holds just one seat out of 150).

The real worry, Schoellhammer notes, is that the ‘elites are behaving much as they did in Canada and the US, and not just those in government’. He points to mainstream media outlets refusing to report the protests, or when they do, ‘casting the farmers as extremists’; acting in effect as a government mouthpiece.

That, so far, is the problem here too. At the time of writing the main print and broadcast media outlets are still ignoring the Dutch farmers protest – with the honourable exception of guess who but Mark Steyn on GB News.

You can read the full Newsweek article here.