Are people really stupid enough to wear masks again? Yes, they are 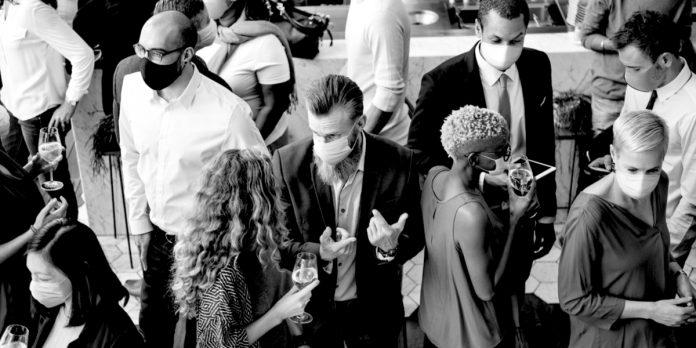 Every morning, with six-wheeled precision, at the very same hour and the very same minute, we get up, millions of us, as though we were one. At the very same hour, millions of us as one, we start work. Later, millions as one, we stop. And then, like one body with a million hands, at one and the same second according to the Table, we lift the spoon to our lips. And at one and the same second we leave for a stroll and go to the auditorium, to the hall for the Taylor exercises, and then to bed.

THIS is what I read when sitting in the dentist’s waiting room last week. Tina and I had been there the previous week for a hygienist’s appointment and everything seemed relaxed; neither receptionist was wearing a mask, though the magic Perspex screen was still in place.

But this time was different. Like some slasher killer from a movie back for a terrible sequel, the masks had returned and so had the instructions from the stony-faced receptionists to wear one; we declined.

Taking our seats, we watched as each person offered one of those grubby things took them without question. One man put his on, looked at us and promptly took it off, as did a woman who arrived later.

One of the receptionists instructing people to put on a mask removed her own probably three or four times in the time it took for Tina to see the dentist, which made me wonder why she insisted on other people wearing one. But hey-ho, I’ve become accustomed to hypocrisy from those in positions of power, no matter how little of it they have.

I had wondered whether we’d see this again. When masks were first introduced, the majority of people wore one. Supermarkets, businesses and health organisations all insisted that you muzzled up before even stepping through their doors.

Most people wrongly believed that a mask would stop a virus – infinitesimal in size compared with the gaps in fabric – from reaching you, and these people didn’t need encouragement to don one. They were more than happy to do it ‘for the good of the nation’. The hive mentality was well and truly alive.

We’ve had a year of freedom from these daft restrictions, but I had a sneaking suspicion that once the media got bored with Ukraine and Brexit, they’d return to the fearmongering of Covid. Over the last few weeks, you’ll have heard about rising cases. Junior health minister Lord Kamall warned in the House of Lords this week that restrictions could be re-introduced.

These are cases, by the way, not deaths. There aren’t people collapsing in the streets or hospitals. A few people are testing positive and that’s enough for the hacks to declare that we might be entering another wave, serious enough for masks to be reintroduced I don’t think any party would be stupid enough to force future lockdowns, but I’m never surprised by the idiocy of government.

My gripe here isn’t with the media hysteria. Crikey, we’re used to that, having had years of it on Covid and Brexit. No, my issue is with people and their willingness to follow every rule, no matter how stupid it is.

I could understand the mob mentality back in the days of pitchforks and torches. The people then were not educated and had to rely on the wisdom and knowledge of smarter men. Today, practically every one of us in the Western world has knowledge and information at our fingertips and we can access it pretty much whenever we want. So how can people still be manipulated like the mobs of old?

Maybe it’s because we exist in the age of convenience. Yes, we have the tools to access whatever we want to, but for the most part, we don’t. People tend to prefer to have all their information come from only a few sources, so they don’t have to think too much.

We have a nanny state that is constantly telling us what to eat, what to drink, how to act and think. Crikey, we’re having a few hot days at present because, you know, it’s summer and it’s supposed to be hot, and we have various people across the media telling us that we need to drink water and stay in the shade. If people don’t know what to do in hot weather, there’s no hope for them.

What I’m trying to say, in a roundabout way, is I’d hoped that by now the population would have realised that serious issues, like the rising cost of living, were caused specifically by lockdowns and by their subservience to rules that made no sense.

Would our government have kept us locked down for so long if most of us had dispensed with silly face coverings? I’m not so sure, so when I see masks being offered and taken without question, it makes me worried – because if enough places start doing this again and enough people accept their rules without question, God knows where we’ll end up.