As Brown blasts Putin, isn’t he forgetting something? 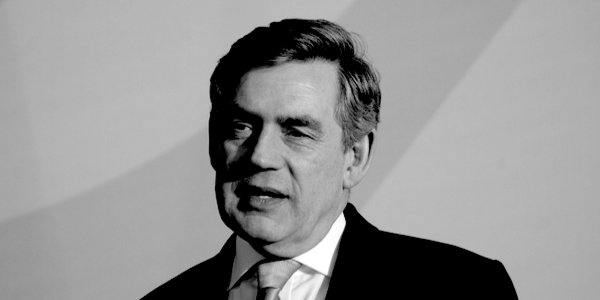 THE latest figure to cast extra-judicial stones at Vladimir Putin is one Gordon Brown, former Prime Minister(2007-2010) and now United Nations Special Envoy for Global Education. Interviewed on BBC Newsnight on April 5, the ever-morose Brown said: ‘We believe that Putin should not be able to act with impunity, that a warning should be sent out that he will face the full force of international law, that his colleagues who are complicit in this will do so as well.’

Brown, who ‘negotiated’ with Putin after the 2006 assassination in Britain of Russian defector Alexander Litvinenko, said that investigations ‘could move very quickly’ resulting in ‘an indictment within a few months’.

Asked if there is any realistic prospect of arrest, he replied: ‘Whether you can arrest him or not depends on his movements . . . but we know he’s left the country on a number of occasions. We know he’s got this huge yacht that he uses.’

There are of course, many other outstanding matters that the ICC might prosecute. In December 2021, Sir Geoffrey Nice QC, the British barrister, finalised his tribunal’s investigations into accusations of crimes against humanity and genocide by the Chinese state in Xinjiang, home to the Uyghurs and other Muslim minorities.

BBC World News reported that the panel found irrefutable evidence that China had conducted ‘a deliberate, systematic and concerted policy’ to bring about ‘long-term reduction of Uyghur and other ethnic minority populations’. Senior officials, including the Chinese President Xi Jinping, were identified as having ‘primary responsibility’ for ‘crimes against humanity, torture, and sexual violence’.

Outraged responses from the US, the UK and the EU came there few: there has been no public condemnation of Xi or his colleagues, no daily reports on the legacy media, no seizure of Chinese assets, no exclusion from international financing, no diplomatic expulsion, and no calls for legal action in any domestic court.

This month also marks the seventh anniversary of another unfashionable conflagration – the ‘perpetual’ war in Yemen. The US has been involved in the country since 1946 and has been engaged in direct armed conflict with Al Qaeda and its affiliates since the October 2000 bombing of the USS Cole off the coast of Yemen. The legal basis for continuing US military involvement is questionable.

The US has been ‘supplying weapons, providing mid-air refuelling, and offering targeting assistance’ to Saudi Arabian and Emirate forces. Iran, in response, has provided military support to the Houthis, turning Yemen into the site of a proxy war between regional and global adversaries.

The impact is catastrophic: the world’s worst humanitarian crisis. In October 2021, Unicef reported that more than ten thousand children were known to have been killed or maimed in the fighting – the true figure is likely to be much, much higher. Eleven million children need humanitarian assistance; 1.7million are ‘internally displaced’ exposing them to increased risks of trafficking, sexual abuse and violence; 400,000 suffer from acute malnutrition.

A Just Security report issued in March details war crimes perpetrated against the Houthis by Saudi and Emirate combatants. A 2018 report by the UN documents multiple violations of international humanitarian law including mass killing and starvation. Joe Biden inherited this war but shows no sign of changing policy, and together with his presidential predecessors he is therefore complicit.

Another act of international aggression which has gone unpunished by any court, domestic or international, is the 2003 invasion and military occupation of Iraq by the US and its ‘special partner,’ the UK. According to President George W Bush and his ‘poodle’ Tony Blair, the aim was to disarm Saddam Hussein of weapons of mass destruction, free his people and save the world from terror.

The adventure did not have United Nations support and UN Secretary-General Kofi Annan confirmed that it ‘was not in conformity with the UN charter . . . it was illegal’. The result was mass destruction, death, misery for millions and the global bloom of terrorism in the shape of AlShabab, Al Qaeda, ISIS and the Taliban.

Before the invasion, Unicef had estimated that 1million Iraqi children had died as a direct result of UN-imposed sanctions – policies which were considered ‘worth it’ by US Secretary of State Madeleine Albright.

That war blighted Iraq and its neighbours. It poisoned the legacy of  Tony Blair, Knight of the Garter, and tainted the reputation of British forces through their involvement with the CIA in the interrogations and torture of inmates held in Abu Ghraib prison in breach of  Geneva Conventions.

Ian Sinclair, writing in Morning Star online, asks: ‘If Putin is a war criminal, why not Gordon Brown?’ Stating what no MSM commentator will, he declares that ‘allowing those who are brazen and unabashed breakers of international law and killers of thousands of Iraqis and Afghans to lead the condemnation chorus on Russia’s violations is establishment hypocrisy distilled’.

’Twas ever thus. Very few global leaders are unsullied, and fewer yet will ever face Nuremberg-style war crimes trials, regardless of how much blood drips from their hands. They are a pack of self-righteous jackals who should be reminded of Jesus’s admonition to the Pharisees: ‘He that is without sin among you, let him first cast a stone.’