Following Episode 1, of the BBC series Seven Worlds One Planet, where he got his facts about albatrosses wrong, David Attenborough has now turned his attention to walruses.

Surprise, surprise, they’re all in danger from global warming:
At the start of the programme, we see thousands of Pacific walrus hauled out on a spit of land somewhere in Siberia.

For most of the year, they feed out in the Arctic Ocean, emerging to rest on the sea ice.

But now climate change has melted the ice here, and the only place within reach of their feeding grounds where they can rest are a few beaches, such as this one. 100,000 of them, almost the entire world population are here.

Once again, he has grossly misled viewers.

The film was shot at Cape Serdtse-Kamen, on the Russian Chukchi coast (No 50 on the map below).

Large numbers of walrus there are not a new phenomenon.

In October 2009, 90 000 walruses hauled out to relax on the Keniskin Bay beach near Cape Serdtse-Kamen’ in the Chukchi Sea. They closely surrounded my field cabin, and during several days I lived in a “walrus siege”. The roar of the walruses did not allow me to sleep, and I was afraid that my cabin would fall apart, and I would be flattened by their giant bodies.

According to the US Fish and Wildlife Service, (FWS), haulouts are perfectly normal all along that coast in summer/fall: 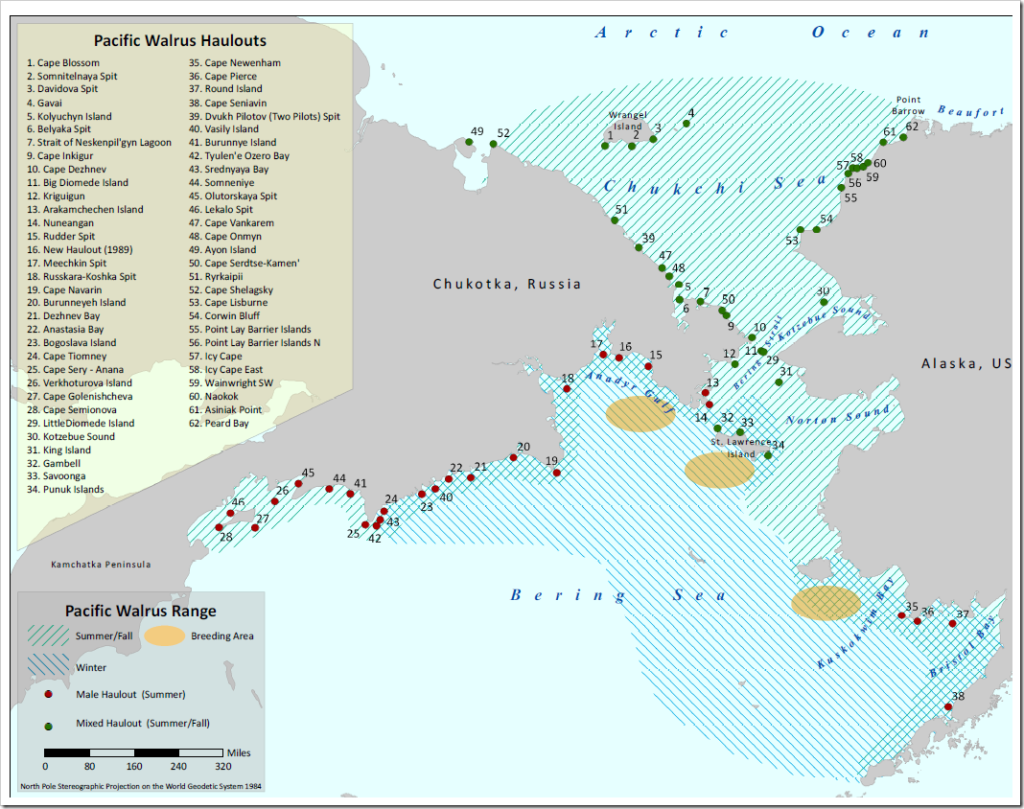 They go on to explain the migratory behaviour:

During the summer months, as the pack ice continues to recede northward, most of the population migrates into the Chukchi Sea. The largest concentrations are found near the coasts between 700 N latitude and Pt. Barrow in the east, and between the Bering Strait and Wrangel Island in the west. Concentrations, mainly of males, are also found on and near terrestrial haulouts in the Bering Sea in Bristol Bay and the northern Gulf of Anadyr throughout the summer. In October the pack ice begins to develop in the Chukchi Sea, and large herds begin to move southward. Many come ashore on haulouts on the Russian side of the Bering Strait region. Depending on ice conditions, those haulout sites continue to be occupied through November and into December, but with the continuing development of ice, most walruses move south of St. Lawrence Island and the Chukchi Peninsula by early to mid-December.

In simple terms, the walrus spend the summer much further north than Cape Sertdtse, around Wrangel Island. They begin to move south in October, as the pack ice begins to grow again, coming ashore to rest and await the ice catching them up, before swimming through the Bering Strait:

Importantly, the walrus are there not because “the ice has all melted”.

In September 2000, the FWS produced this map of the most important haulouts of Chukotka, including Capre Serdtse: 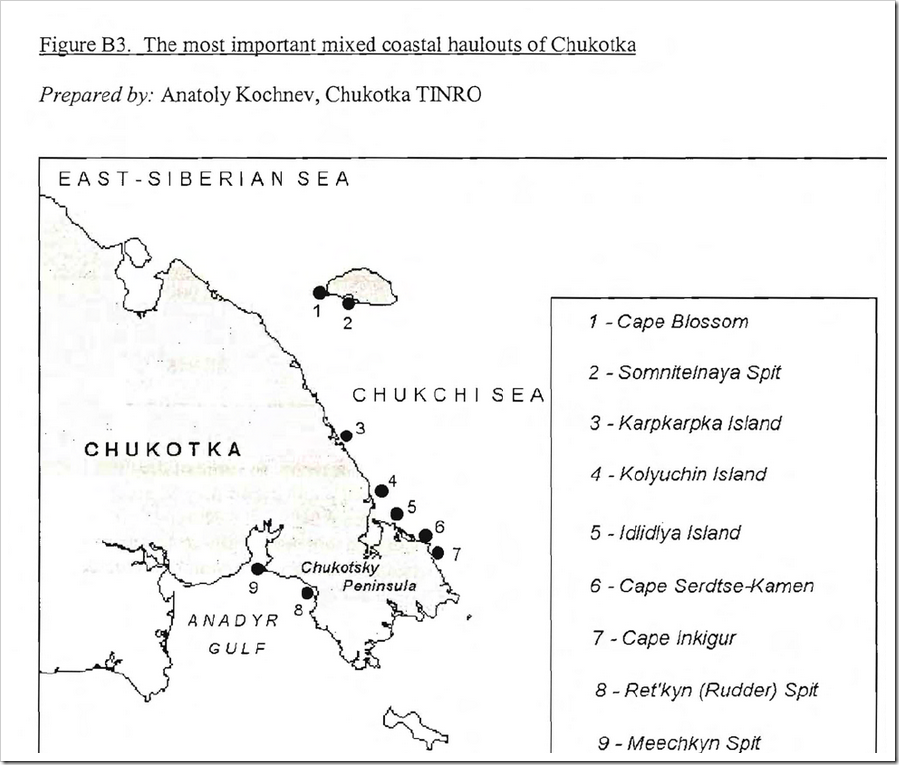 So there is nothing new about these haulouts, they are perfectly natural behaviour for walrus, which has been going on for many years. And as Kochnev alsopoints out below, walrus only arrive at the Cape in numbers in October, when the pack ice has already been reforming. The walrus would be there long before October if lack of sea ice was the driver. 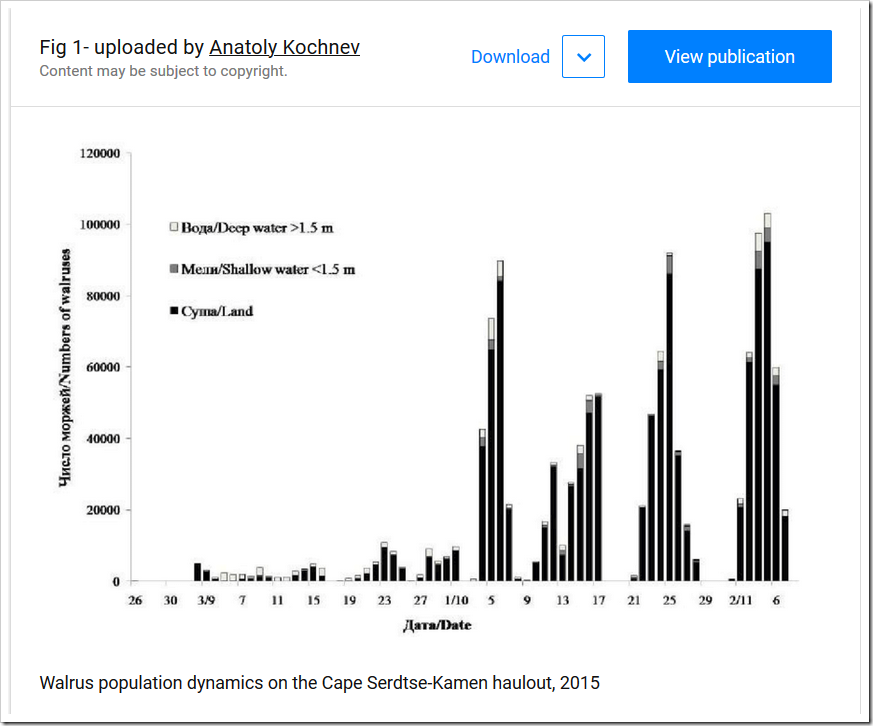 Going further back, one of the leading experts of the time, Francis Fay wrote this paper in 1982, and noted that there used to be many coastal haulouts on the Siberian coast in the early 20thC, before hunting took its toll:

Fay also includes this note about aerial census, highlighting the large number of walrus on the coastal hauling grounds of Chukotka: 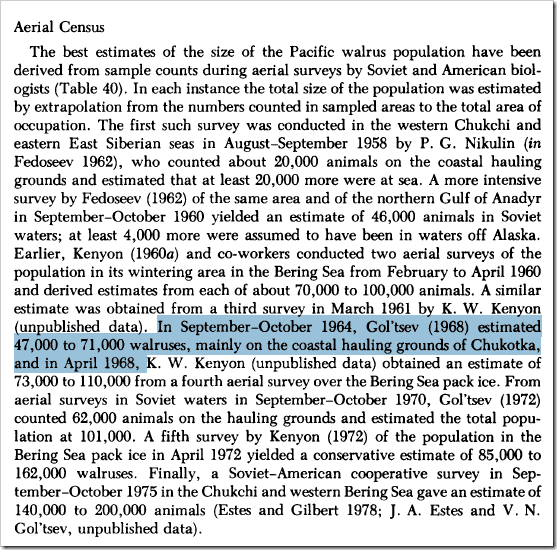 So, large numbers of walrus on these beaches is nothing new.

The fact that Attenborough found so many walrus on this occasion is an indicator of how walrus populations are thriving, rather than anything sinister.

It is a pity he chose to present a fiction, instead of the facts.

The next sequence in this episode is about the “walrus falling off a cliff because of climate change.

The GWPF have dealt with this here.

This is a reprint from https://notalotofpeopleknowthat.wordpress.com/2019/11/04/attenborough-gets-his-facts-wrong-again-about-walrus/