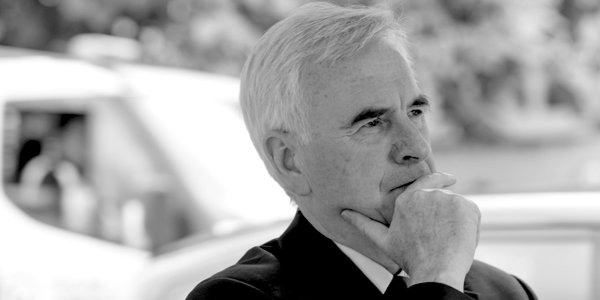 SHADOW Chancellor John McDonnell’s speech on November 7 was momentous, if not totemic. As part of Labour’s proposed transformation of Britain, the spending taps would be turned on with little regard for long-term fiscal sustainability.

This fund would pay for, for example, upgrades to schools, hospitals, social care facilities and council homes. This expenditure is not, of course, the only Labour Party commitment to increased spending.

The ten-year Social Transformation Fund would aim to spend £250billion, averaging £25billion a year, on projects to improve ‘sustainability’, such as energy and transport, and insulating existing homes.

Taken together, these two funds alone could add £55billion a year of extra investment spending, more than 2½ per cent of Gross Domestic Product, although there must be doubts about the practicalities of expanding public sector investment to this degree in a full employment economy.

This is not all, however. Far from it. The Conservative Research Department (CRD) recently released its estimate of the total costs of Labour’s plans, for day-to-day spending as well as for investment and allowing for the commitments made in the 2017 manifesto.

The estimate included the CBI’s estimate of the £196billion up-front costs of Labour’s plans to renationalise water and energy utilities, train firms and the Royal Mail and sundry costs such as the introduction of the four-day working week. All in all, the CRD concluded that the total costs of Labour’s proposals could amount to a staggering £1.2trillion over five years.

Doubtless these estimates will be finessed when the Labour Party releases its 2019 manifesto and organisations such as the Institute for Fiscal Studies (IFS) pile into the debate with their own estimates. However, whatever the precise costings, there can be little doubt that Labour is intent on rapidly increasing public sector spending.

Crucially, McDonnell would also introduce new fiscal rules (as would the current Chancellor, incidentally). The current rules that require falling public sector debt as a percentage of GDP (and note debt is currently just over 80 per cent), the structural deficit to be no more than two per cent of GDP by 2020-21 and a balanced budget by the mid-2020s, would be replaced.

Under his proposed ‘fiscal credibility rule’, borrowing for investment would not be included in the borrowing targets, although a commitment to balance the current budget would be. The Shadow Chancellor would also aim to keep debt interest costs below 10 per cent of tax receipts.

Otherwise, there would be few spending limits as long as spending created ‘value’ on the asset side of the Government balance sheet, though such estimates would be fraught with difficulty.

McDonnell would, therefore, have little concern if debt were rising rapidly as long as the estimated value of public sector assets was rising at least as rapidly, so public sector ‘net worth’ was at least steady. Labour’s nationalisation plans would, of course, be acceptable under this framework, as they would bring the Government an asset as well as debt – or so the argument goes.

Granted, there are theoretical merits in looking at both sides of the Government’s balance sheet when considering fiscal sustainability. And, granted, there may be a case for ‘borrowing for investment’ when borrowing costs are low, as they currently are. But there are also very significant risks as well.

Credible fiscal rules need to work in practice as well as in theory. Crucially, they need to convince the bond markets, which will be needed to finance the extra borrowing. If, however, borrowing, and debt, were rising very rapidly, there has to be a very distinct risk that a Labour government’s assessment of the value of public assets would fail to convince the markets.

As we have already noted, assessing ‘value’, inevitably partly based on subjective assumptions and arguably easy to manipulate for political purposes, is fraught with difficulty.

Markets could become distinctly nervous in these circumstances and, bond yields, the costs of funding borrowing, could rise rapidly, putting even more pressure on the public finances. Market sentiment can so easily turn, especially in time of crises, and could make a mockery of the 10 per cent interest costs ‘rule’ as a constraint on borrowing.

Interestingly enough, Moody’s, one of the three major credit ratings agencies, assigned a negative outlook to Britain’s sovereign rating on November 8, blaming Brexit-related policy uncertainty and the recently-announced spending plans, with their implications for higher debt.

The Shadow Chancellor’s spendthrift proposals are all the more disheartening because Labour plans a series of policies that would significantly undermine businesses’ ability to create wealth and jobs, their contribution to economic growth. These policies include the introduction of the four-day working week, plans to raise corporation tax and forcing large firms to place a maximum 10 per cent of their shares into an ‘inclusive ownership fund’.

Perhaps even more importantly, we should never forget that the Labour Party has form when it comes to wrecking the public finances, leaving the Conservatives to rectify the mess.

I remember only too well how public spending grew rapidly in the 2000s, easily outstripping the underlying growth in the economy. The ‘prudent’ Chancellor Gordon Brown was not prudent at all – he was profligate.

Total Managed Expenditure (TME, total public spending) more than doubled from £343billion in 1998-99 (the first full financial year after the installation of the Labour government in May 1997) to £717billion by 2010-11, an annual increase of more than £30billion. Health spending rose by 150 per cent over the period, whilst education spending was 130 per cent higher.

Even allowing for inflation, TME increased by an average of more than four per cent a year over this period, compared with economic growth averaging less than two per cent a year.

This pattern of spending was clearly not sustainable. It was not ‘affordable’, especially as public sector borrowing rocketed to £158billion in 2009-10 (10.2 per cent of GDP, see chart), in the wake of the Great Financial Crisis (2007 to 2008).

Suffice to say, the coalition government (2010-2015) had to sort out this shocking financial situation. Of course, it had to control spending and did so valiantly. But looking back on this period, its efforts really should be seen as the ‘normalisation’ of spending after a reckless spending splurge, rather than heralding a period of public sector, hair-shirt ‘austerity’.

Unfortunately, the ‘austerity’ narrative has become embedded in any debate on public spending. Unfortunately too, much of the current debate (not least of all from the IFS) analysing public expenditure trends starts at 2010-11, and thus effectively fails to acknowledge the rapid and unsustainable growth of spending between 1998 and 2010.

It thus presents a partial analysis of the true state of the UK’s public spending profile. Any debate on public spending should really begin in the late 1990s. As can be seen from the chart, the TME/GDP ratio was still as high as 39.9 per cent in 2018-19 (spending was around £852billion), well above the levels of the late 1990s and early 2000s, albeit down on the peak ratios.

Such high spending levels, of course, have to be paid for. The tax/GDP ratio rose to 34.4 per cent in 2018-19, the highest ratio since the late 1960s and doubtless set to rise further.

One can only reiterate that the Labour Party really does have form when it comes to wrecking the public finances. I have little doubt that the Shadow Chancellor’s plans for soaring public spending would also end in tears if they were ever to be implemented. 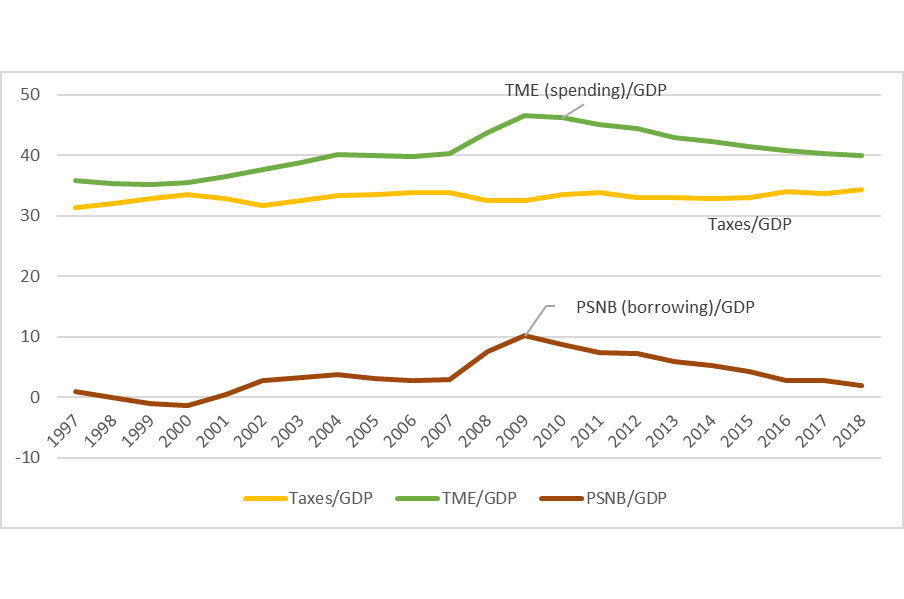 Share
Facebook
Twitter
WhatsApp
Email
Previous articleWas Prince Andrew’s phone hacked?
Next articleHow dare they cast out this councillor for holding to her principles on LGBT