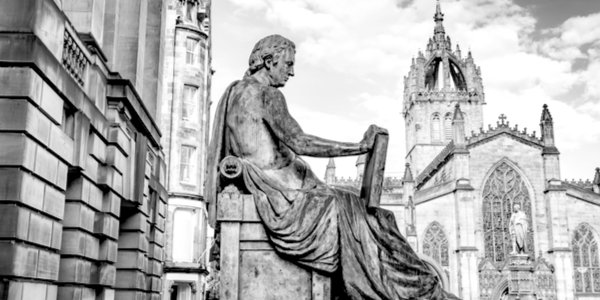 EDINBURGH is shrugging off its image as a dour, grey old lady by the Forth. It wants to keep up with the times.

The US has rioting mobs tearing down statues with impunity. Oxford talks of removing remembrance of benefactors. Bristol throws statues in the harbour. Edinburgh can’t be left behind.

There being no appetite for historical vandalism amongst the people, the council decided to intervene and appoint a review group to vet all historical landmarks in the city.

Remember, members of Edinburgh Council are the people who over the years have brought us the statutory repairs scandal, the whistleblowers scandal, the crematorium scandal, the Granton marina debacle, and the never-to-be-forgotten trams fiasco. As the police would say, ‘these people have previous’.

Understandably, this being a matter of historical interpretation, the council appointed as the head of the review group Sir Godfrey (Geoff) Palmer, professor of grain science, human rights activist, and the first black professor in Scotland.

The names of other members of the review group are kept secret. The University of Edinburgh has also appointed its own review group led by – you guessed it – Sir Godfrey Palmer, grain scientist and clearly the go-to man in Edinburgh for historical research.

Sir Godfrey didn’t want to tear it down – that would be so controversial even the citizens of Edinburgh might notice. He wanted a plaque put at the base explaining how, by delaying parliament’s abolition of the slave trade, Dundas was responsible for the enslavement of 500,000 black Africans.

Jonathan Hearn, professor of historical sociology at Edinburgh University, and president of the Association for the Study of Ethnicity and Nationalism, criticised this for failing to take account of the ‘historical complexity’ of the Dundas legacy.

He pointed to the case of Joseph Knight. This former slave won a case in the Court of Session in 1774 establishing the principle that Scots law would not uphold the institution of slavery in Scotland. Dundas had been Knight’s advocate.

As is all too common, Palmer responded to Hearn and his supporters on Twitter. ‘This academic racist gang has used the press to peddle misinformation which supports the horrors of chattel slavery in an attempt to try and stop the people commenting on a topic which they believe they should control with elitist bias.’

At this point, Sir Tom Devine entered the fray. Devine, like Professor Hearn, is an actual historian. In fact, Devine is Scotland’s pre-eminent historian and respected throughout the world. He accused Palmer of ‘appalling slurs of racism against those whose only fault was to have a different view from his own’.

Palmer quickly responded by doubling down, declaring: ‘Devine’s biased, racist demand does not bother me.’ Devine’s ‘demand’ was merely a request for open discussion of the matter.

Edinburgh University issued a statement concerning the stushie (or rumpus for non-Scots). ‘We are committed to freedom of expression and academic freedom and stand by our published statement on protecting these freedoms,’ it said. ‘We will continue to listen to views on our principled approach, including respecting the right of individuals to challenge our community if they think certain behaviour impinges on the environment of mutual respect.’

Devine was not slow in responding. ‘What an absolutely shameful and fatuous response from an institution which ought to have a duty of care for its staff … a professor and a professor emeritus have been publicly vilified, abused and described as racists by an individual who is currently chairing an important university inquiry into its historical links to slavery. And for what reason? Because they dared to offer alternative opinions based on their academic expertise and knowledge.

Devine said the senior management of Edinburgh had brazenly committed trahison des clercs, a betrayal of intellectual, artistic, or moral standards by writers, academics, or artists. ‘There was no hint of support or even an inquiry into these disgraceful slurs, nothing other than supine platitudes.’

Appalled though he might have been, he could hardly have been surprised by the ‘supine’ response. University principal Peter Mathieson had already agreed to change the name of the David Hume Tower to 40 George Square because of recently discovered evidence of Hume’s attitudes on race. Mathieson seems unaware of the fact that George Square is named after George III, who strongly opposed abolition of the slave trade.

Hume, one of Britain’s pre-eminent philosophers, a man of world renown and influence, and a shining ornament of Edinburgh and Scotland’s intellectual history, was erased from the university because a few woke students discovered that, like the vast majority of his day, he thought blacks intellectually inferior to whites.

Mathieson took the decision to rename the tower without consultation with senior academics, who bluntly told Mathieson the ‘tokenistic’ cancelling had caused ‘substantial external damage to the university’s reputation’.

At the time, Sir Tom Devine wrote: ‘The current principal of Edinburgh University should hang his head in absolute shame’.

But shame is the one thing the woke are unable to experience. How can they, when they know without a shadow of doubt that they are in the right, they are always in the right, and any who oppose them are not only wrong, but wicked and motivated by vile ulterior motives, like racism?

You can be Edinburgh University’s Professor Emeritus of Scottish history, or a professor of historical sociology at the university. But it doesn’t matter your intellectual standing throughout the world – if you want to speak of historical complexity on this subject, you must be motivated by racism.

The authoritarian cultural vandals of woke, in their desire to impose their ideology, are prepared to destroy anything and anyone who gets in their way.

Share
Facebook
Twitter
WhatsApp
Email
Previous articleNow even the menopause is a race issue
Next articleTrudeau faces a force mightier than trucks: The people, fuelled by love of freedom