BBC’s Englishness survey and the results it couldn’t stomach

On Sunday evening the BBC posted a piece on its website concerning the findings of a survey it had commissioned from YouGov. The title of the story: ‘The English question: Young are less proud to be English’ was perhaps the most negative they could have found from the results. By early Monday morning it had vanished and search terms such as ‘YouGov’ or ‘Englishness survey’ failed to produce any results.

The survey was commissioned by the BBC’s rather sinisterly titled ‘The English Question’ project, although there appears to be no information available on this project online.

The Telegraph (paywalled) has covered these results, which should by now be giving readers the suspicion that they were not what a Left-wing broadcast corporation wanted to hear!

Missed out from the BBC’s own article on the results of its survey was the answer to questions such as ‘Do you feel European?’ Just 9 per cent said ‘very strongly’ and 17 per cent ‘fairly strongly’.

It appears that little if any interpretation was carried out on the results, just basic statements of findings such as:

‘Parts of Lincolnshire and the Midlands identify particularly strongly as English, with more than nine out of 10 respondents saying they felt very strongly or fairly strongly English.’

‘English pride is felt by about two thirds of people in coastal and former industrial towns but less than half of people in major cities like Liverpool and Manchester.’

We know that the former are not multicultural and that the latter are, and we know from the Guardian reports that ‘ethnic minorities in UK feel most British’ which leads to only one conclusion: that multiculturalism is destroying British identity amongst the indigenous population.

As witness: ‘Despite their pride in being English, the majority of over 65s (60 per cent) believe England was better in the past.’

‘Young people are the most optimistic, with 28 per cent of 18 to 24-year-olds believing England’s best years are still in the future’ (that’s about the most positive spin you could put on it because 72 per cent don’t agree with that!) 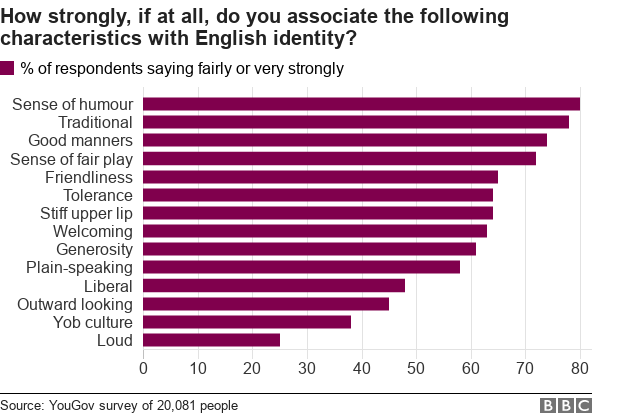 This graph would appear to support the very existence of The Conservative Woman, and shows that people questioned still cling on to conservative values despite attempts to stamp them out.

Tradition, good manners, and a sense of fair play are all values cherished by conservatives – no wonder the BBC do not appear to be very happy with the results of this survey!

Of course there is too much detail to cover in a short blog piece. You can access the raw data here and make of it what you will.