Be a honey badger and go for the goolies 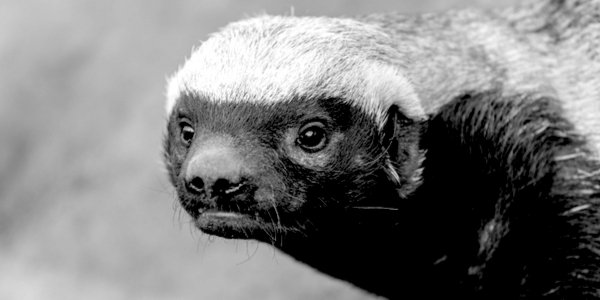 NEW Year resolutions are thin on the ground in 2021. Perhaps the Covid lockdown has destroyed the nation’s optimism or maybe the notion of changing yourself sounds too much like a personal Great Reset. But if world events are not going to cheer and inspire you, you should try to find motivation from within.

Gad Saad, an evolutionary behavioural scientist and professor of marketing at Concordia University in Montreal, has been fighting the lunacy of wokeism and urges people to become like honey badgers in challenging political correctness. Honey badgers, closely related to weasels, are less than 12in high, under 3ft long and weigh less than 40lb but they are prepared to stand up to lions. They usually get away with this not only due to a thick skin and sharp teeth but because they respond to an attack with ruthless aggression; honey badgers will go for the king of jungle’s testicles, which usually persuades the bigger animal that the potential meal is not worth the risk.

Gad Saad’s honey badger tendencies are evident in his most recent book, The Parasitic Mind: How Infectious Ideas Are Killing Common Sense. Social Justice Warriors are ‘intellectual terrorists’, just one of a number of ‘anti-freedom, anti-honesty’ movements. Universities have become ‘retreats for the emotionally fragile’. Saad is careful to put diversity, inclusion and equity in that order to brand it ‘the DIE religion’. Imagine a blunt, sarcastic Lebanese Jewish Jordan Peterson.

Saad knows from personal experience where identity politics leads. Born and brought up in Beirut, after the death of Egyptian leader Gamal Abdel Nasser in 1970 he saw a procession in his street chanting ‘Death to Jews’. A boy in his class said that when he grew up he wanted to be a Jew killer; the class erupted in applause. Saad’s  family fled Lebanon when it became clear such words would soon manifest themselves in action. This has left him showing no intellectual mercy to Western, middle-class wokesters, beating up various unscientific politically correct ideas (such as boy/girl toy preferences being a function of socialisation) with an efficiency and brutality of words. His linking of Islam to terrorism is equally no holds barred.

The key idea behind The Parasitic Mind is that SJWs are suffering from what Professor Saad calls Ostrich Parasitic Syndrome: they are ostrich-like in the face of evidence refuting their ideas and their ideology takes over their minds like an invading parasite. Nature has a few examples of this: parelaphostrongylus tenuis infects the brains of ungulates (moose, deer, elk) causing them to walk endlessly in small circles, even when approached by predators; toxoplasma gondii makes mice lose their fear of cats. Try debating with a hard core Remainer or lockdown enthusiast and you’ll understand what he’s getting at.

Those suffering from OPS also often exhibit what Saad labels a ‘homeostasis of victimhood’. Homeostasis is a feature of systems whereby they react to external changes to maintain internal equilibrium; for instance sweating is the body’s attempt to prevent internal overheating. So as real examples of discrimination have disappeared, the homeostasis of victimhood creates new ones: ‘If an insufficient number of victimhood cases exist, alter the definition of victimhood and turn banal daily interactions into “exciting” data supporting faux-victimhood.’

Pathologising wokeness may not stand up to clinical tests for categorising mental illness, though it illustrates the depth to which these corrosive ideas have infected believers. However, The Parasitic Mind is largely free from academic jargon and is an easy read; Saad prides himself on communicating with the public in a readily comprehensible style as evidenced by several appearances on Joe Rogan’s podcast. A more substantial criticism of Saad is the lack of a solidly grounded alternative vision. The closest he gets is to call for a recommitment to the virtues of western science and the age of Enlightenment, consciously echoing Steven Pinker. But, being an atheist like Pinker, Saad doesn’t connect the philosophical dots back to the Judeo-Christian notion of individual worth, which provides a firmer philosophical basis for the individual liberty and free inquiry he espouses.

Such criticism may be churlish as Gad is firmly on the side of the angels he doesn’t believe in. One shouldn’t carp when he dismisses sympathy hashtaggers (‘Those who engage in such platitudinous signalling are cowardly and meek’), gender obsessives (‘To elevate one’s ‘self-identity’ above reality is hardly liberating. It is a rejection of truth’) and the non-judgmental (‘To never judge is to be an intellectual coward’) with such directness and incisiveness.

If you don’t want buy his book, then treat yourself to his YouTube channel. As well as interviews with like-minded honey badgers, he comments on woke madness, provides advice on dealing with Left-wing nonsense (such as when a teacher at his daughter’s school was talking about Black Lives Matter) and mercilessly mocks the outrage mob when they exhibit their homeostasis of victimhood, whether by hiding under the table at news of Jordan Peterson’s new book or beating himself with his whip of self-disgust for his patriarchal marriage.

Saad also demands that those who agree with him speak up. Given the trials he’s been through in his own life, he has limited sympathy for those who are afraid to speak lest they lose friends or career opportunities: ‘Cowardice should be added to the list of seven deadly sins.’ But the book is not meant to berate those hesitating to take a position but to encourage. ‘Be assured in your principles and stand ready to defend them with the ferocity of a honey badger.’ And remember to go for the sensitive parts.