NewsPaperthe art of publishing
HomeBrexit WatchBe careful what you wish for, Brussels
0

Be careful what you wish for, Brussels

DESPITE occasional but unconvincing protestations that what it most wants is Brexit done and its British perpetual problem-child gone, the EU continues to try to ensure that our departure – or even our non-departure – is as protracted and painful as possible; a task, incidentally, in which it can count on unstinting help from our now-gone-rogue Prime Minister, Cabinet, Government and Parliament.

It may, however, come to regret it.

To recap: the UK’s first Article 50 extension request has now (almost) fallen by the wayside. On 21 March, the EU and UK agreed to extend Article 50 until 22 May subject to the PM managing to get her essentially Remain-by-Stealth (non)-‘Withdrawal’ Agreement through the House of Commons, but failing that, only until 12 April.

As we now know, she failed to get approval for her deal, and has ruled out bringing it back for a fourth attempt, so she has until tomorrow, Wednesday 10 April, to present EU leaders with a way forward, or we leave with no deal this coming Friday 12 April.

Thus it’s tomorrow, 10 April, that May goes once more as a supplicant begging to Merkel and Macron. Her letter on Friday 5 April to European Council President Donald Tusk sought only a further extension of Article 50 until 30 June, ostensibly to allow her time ‘to win cross-party agreement’ – meaning in practice capitulating still further to Corbyn and Labour’s demands for an even more blatant Brexit-betrayal that she is proposing already – but with the option, if the necessary legislation was passed, to leave before 22 May, thus obviating the need for UK participation in the forthcoming elections to the European Parliament.

The EU, however, at present looks unlikely to be so precisely accommodating. Tusk is reported to be recommending EU leaders to agree to a ‘flexible’ 12-month extension, but with only a potential, not a definite or guaranteed, break clause for if the UK ratifies a deal during that time. However he is reportedly coming under pressure from at least some EU leaders, especially the Irish Taoiseach, to insist on a longer extension.

May is such an inept and appeasing negotiator that it’s easy to see her conceding that longer extension, without a break clause for a 22nd May cut-off date: it’s surely feasible that her perverse obstinacy would make her calculate that would give her further time to continue the war of attrition to strangle Brexit which she and her Number 10 team have been waging ever since her uncontested coronation as PM in July 2016, and crucially thereby prolong her Premiership, which seems to be her overriding consideration.

Where both she and the EU really might be hoist by their own petard, though, is on the issue of those European Parliament elections. If May either fails to get her desired 22 May option tacked on to an extension only to 30 June, or she succeeds but can’t get the necessary legislation through Parliament by 22 May, then the UK looks set to participate in them. If she agrees the longer ‘flexible’ extension, then the UK also looks set to participate in them.

(If she were so foolish as to agree the longer ‘flexible’ extension but with a condition that the UK did not contest the EU Parliament elections, committing the UK to be stuck in the EU for an indefinite period but with no representation in its legislature, I suspect that would be the last straw, even for her supine Cabinet, and she’d be ousted within hours).

May has every reason to fear UK participation in those EU Parliament elections. After the local elections on 2 May, which don’t cover the entire country but for which ‘Conservative’ Party support is already said to be in freefall, they represent the first opportunity since her disastrous General Election campaign of 2017 for the nation as a whole to express a verdict on her and her party at the polls.

The omens don’t look good for either. Seven out of ten Conservative Party members say May should announce her resignation now. Commentators are plausibly predicting that the Euro-elections will be a catastrophe for May and the Tories, especially since widespread revulsion erupted among activists, members and usually loyal voters at her choosing to caucus with Corbyn and Labour to overcome opposition among her own MPs, and polling showing that, in the likely event of the UK not having an agreed deal by Friday, voters prefer leaving on No Deal to accepting an extension, or remaining in the EU. 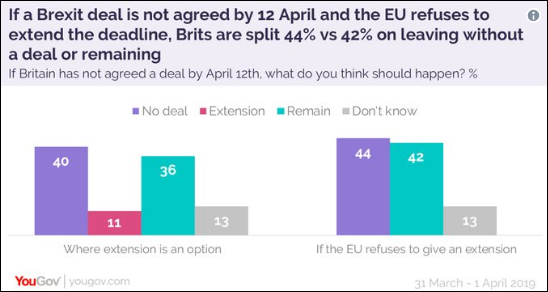 The prospects for Labour in the Euro-elections don’t look much better, and they’re reported to be worried. With Nigel Farage’s new Brexit Party pledging to present as full a slate of MEP candidates as possible, it’s not inconceivable that Britain could send its numerically most EU-sceptic cohort of MEPs ever to Brussels, bent on manifesting the anger and frustration of the voters who sent them there.

They would find many more kindred spirits there than previously. With the growth in electoral support for anti-EU parties across Europe during the last five years, it’s being predicted that a loose cross-spectrum alliance of anti-EU parties could win up to a third of all seats in the 2019-2024 EU Parliament, with the potential to paralyse Brussels decision-making. Plans for a pan-Europe anti-EU alliance for the upcoming Euro-elections are being discussed by parties from Italy, Denmark, Germany and Finland https://euobserver.com/political/144607. If that one-third were joined by, say, 50 or 60 pro-Brexit UK MEPs, with as many as 30-40 per cent of the EU Parliament then consisting of anti-EU MEPs, they could potentially block legislation and disrupt foreign and trade policy.

It’s not as if Brexit is the EU’s only problem, or even its biggest one. The eurozone economy is teetering on the brink of recession, the euro itself is being kept afloat on a sea of bank debt and central bank subsidy, and the unemployment crisis, particularly among the young across Southern Europe, continues to be intractable.

The addition of a large contingent of fiercely anti-EU, pro-Brexit MEPs from the UK following its participation in the 2019 Euro-elections could end up showing the EU just how misguided were its efforts to make our exit as difficult and protected as possible. Be careful what you wish for, Eurocrats.