Behind every children’s crusade, Leftie adults are calling the shots 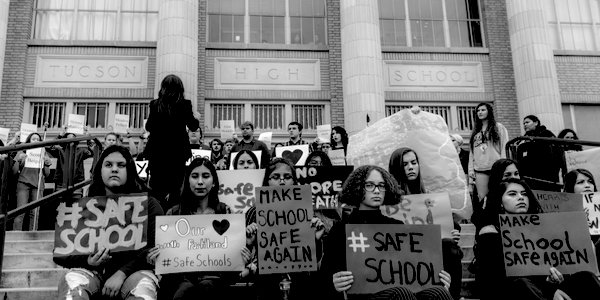 Children’s crusades don’t end well. They haven’t in the past, they don’t today. However passionate or sincere they are, whenever you look behind the children you find adults pulling the strings for their own purposes.

Today the USA is witnessing a children’s crusade. This time it is ostensibly against the Second Amendment to the Constitution. Following the February shooting at Marjory Stoneman Douglas High School in which 17 died, idealistic students, egged on by the media and ‘progressive’ politicians, are demanding constitutional change.

Seventeen-year-old David Hogg, who emerged as a spokesman for the movement, has received largely uncritical support from the media. When conservative commentator Laura Ingraham tweeted that Hogg’s application had been rejected by several universities, Hogg had a teenage tantrum and, supported by Left-wing activist group Media Matters, pressured Ingraham’s advertisers into boycotting her show, Ingraham Angle. Over a dozen advertisers pulled their ads. Ingraham inadvisedly apologised, only to be met with rejection and further abuse from Hogg. Ingraham should have realised that one should never apologise to progressives unless you have actually done something seriously wrong. They see apologies as a sign of weakness and double down on the attacks.

Despite his calls for civility in discussion, Hogg has a track record of foul-mouthed invective against any who disagree, and has never been called to account by his enablers. He has clearly not profited from the dictum of Jordan Peterson that we should learn to clean our own rooms before trying to change the world.

Speaking of Republican politicians Hogg said, ‘It just makes me think what sick f–kers out there want to continue to sell more guns, murder more children, and honestly just get re-elected. What type of sh–ty person does that? They could have blood from children splattered all over their faces and they wouldn’t take action, because they all still see these dollar signs.’

He has described conservative commentator Dana Loesch as ‘hypocritical and disgusting’ for criticising failed Broward Sheriff Scott Israel, and accused senator Marco Rubio of being bribed by the National Rifle Association to give away children’s lives. Hogg called the NRA and its members ‘child murderers’.

Whatever position one takes on gun control, it is quite clear that Hogg and his helpers think that only the child protesters and their enablers are capable of taking a principled stance; everyone else is corrupted by money and power. This certainty comes as no surprise to any who have attempted to bring up children.

As usual, adults with their own agenda are spurring them on. Progressive organisations such as Move On, Planned Parenthood (which has taken more lives than all the guns in America) and Woman’s March LA helped the students with logistics, planning and strategy for the March For Our Lives rally held on March 24.

This is to be expected: children would need help in organising nationwide events, and they are to be encouraged in taking an interest in socio/political issues. However, it is clear that March For Our Lives is no organic student movement; rather it is a tool being used by adults to achieve their aims. This is about more than gun control. As Hogg has said, ‘At this point, you know, we’re changing the world.’ Hailed as one of the most significant demonstrations in American history, March For Our Lives was a student-led, young people’s rally for a single cause, gun control. However, the Washington Post found that it wasn’t as claimed.

A survey by Dana Fisher, a professor of sociology at the University of Maryland who is researching for a forthcoming book aptly titled American Resistance, found that from a sample of 1,745 attendees at the March For Our Lives only 27 per cent were ‘first-time protesters’; the rest were seasoned campaigners. Far from being a children’s march, only 10 per cent of participants were under 18. The average age was 49.

Surprisingly, of the first-time protesters, only 12 per cent ‘reported that they were motivated to join the march because of the gun-control issue’. Nearly four times as many (42 per cent) were there to protest against Donald Trump, while 56 per cent were there for ‘peace’.

The attendees weren’t only far more Left-leaning than a truly representative rally would have been, a strong majority (70 per cent) were female and of them around the same percentage had at least a four-year college degree.

March For Our Lives protesters were also more likely to identify as ideologically moderate. About 16 per cent did so, higher than at any other protest event since the inauguration. But unsurprisingly, it was still a very liberal assembly: 79 per cent self-identified as ‘Left-leaning’ and 89 per cent reported voting for Hillary Clinton.

In truth this was an anti-Trump resistance rally put together by anti-Trump forces, dominated by pro-Hillary Clinton donors, voters and fundraisers. The children behaved exactly as they were enabled and directed. They said what they were trained to say and what they have been educated to believe.

Whatever one thinks about gun control in the USA, and most of us outwith America have only a hazy grasp of the technicalities and emotions involved, it seems natural to take a stance following recent events. However, the weaponising of children and taking their very real concerns and co-opting them for adults’ political concerns gives rise to fears for the future.

Like all children’s crusades this is not going to end well.