NewsPaperthe art of publishing
HomeNewsBending the knee to Marxist oppression
1

Bending the knee to Marxist oppression 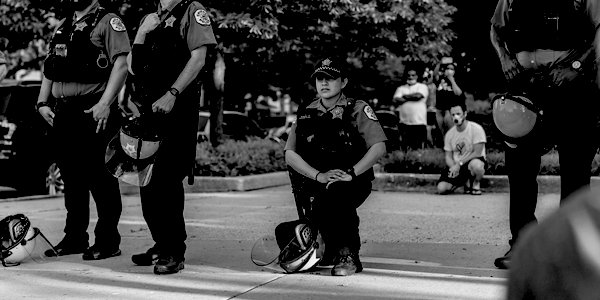 IT IS two months since George Floyd’s death at the hands of the Minneapolis police catalysed mass protests and violence across the United States and in the UK, putting an organisation that few were aware of, in this country at least, centre stage of politics. Since then, despite feature length articles on emergent Black Lives Matter (BLM) spokesmen such as ‘Killer Mike’, there has been remarkably little examination of the movement’s history and its goals.

The sight of sports teams, politicians and the cultural elite uncritically bending the knee to BLM as though they needed to display their anti-racist credentials is dismaying enough. This becomes all the more sickening once it’s understood what the BLM movement really stands for.

Even cursory inquiry reveals that BLM are pursuing a race war, the roots of which began way before their mass rallies this year. The irony is that those who support BLM because they are supposedly ‘anti-racist’ are actually advocating racial division.

BLM do not hide their aims, detailing them clearly on their website. Their desire is to unite the ‘global black family’, an idea that is socially and culturally illiterate and certainly racist. What unites people far more than the colour of their skin is their culture, nationality or religion. To interpret society solely through the prism of race is to adopt the ethos of the Apartheid regime.

The BLM manifesto is littered with woke language (‘woke’ originally was a political term of African-American origin which referred to ‘a perceived awareness of issues concerning social justice and racial justice’).

BLM want to ‘do the work required to dismantle cisgender privilege’ (hardly privilege when current estimates suggest over 99 per cent of the population regard themselves as either male or female). They support transgender dogma, which involves forcing women out of their safe spaces and seeks to shut down their voices, thereby erasing decades of women’s rights and suggesting that a strange misogynistic culture thrives in BLM.

Another of their goals is to ‘disrupt the Western-prescribed nuclear family structure requirement by supporting each other as extended families and “villages” that collectively care for one another’. This is the epitome of socialism, where the rights of children and parents to live together as a family are eliminated by the state.

BLM also want to abolish the police and prison system which, as the murders in the self-policing Chaz/Chop autonomous zone in Seattle showed, can lead only to more violence and a breakdown in society.

These aims should come as no surprise given the political allegiances of the BLM co-founders. One of them, Patrisse Cullors, has admitted that the leadership of BLM are trained Marxists. Her unhinged writing on the democratic election of President Donald Trump is most revealing. Cullors pits black against white, turning the vote for POTUS into a race war. By describing the US as systemically oppressive and as a fascist state she trivialises the meaning of both. Her ethos is straight out of the Marxist playbook, telling Americans that they are living in tyranny, a lie leading to anarchy and possibly revolution.

Her co-founder Alicia Garza believes, despite evidence to the contrary, that ‘black lives are being systematically targeted for demise’.

Despite honeyed words about democracy and justice on her website, their colleague Opal Tometi is a passionate supporter of oppressive regimes. In 2015 Tometi headed a delegation to Venezuela to observe the election there. The only observers allowed were those sympathetic to the regime. A photo shows her arm-in-arm with President Nicolás Maduro, a documented abusers of human rights along with his predecessor Hugo Chavez.

In the same year Tometi wrote a passionate article, praising Chavez and Maduro and lambasting the US. Given that the two men have destroyed Venezuela through socialist policies, her words are sickening. Most Venezuelans face hunger on a daily basis, despite the country’s natural wealth. Madura has been charged by the US with drug trafficking.

Also in 2015, a BLM contingent travelled to Cuba, another country in which human rights abuse is prolific. This blog states that they were educated on how to ‘leverage’ identity politics. In other words they were trained by Marxists on how to create division and anarchy. Supporters of BLM should ask why this movement pays homage to the tyrannical regimes in Cuba and Venezuela that cause so much misery to their citizens, including black and ethnic minority people.

Cullors, Garza and Tometi all have their own glitzy websites. Anarchy and protest marching doesn’t come cheap. An organisation like BLM, with many global chapters, does not run on fresh air. In June they announced a fund of £5.2million to support grassroots organising work. Their funds come from a variety of donors, most of whom have become extremely wealthy through the very capitalist system that BLM want to dismantle. These include Airbnb and Anastasia Beverly Hills, a luxury makeup brand. George Soros’s Open Society Foundation has given BLM over £26million to date, which we should not be surprised by since BLM’s goals align with Soros’s attack on Western civilisation.

In America, the Democratic Party has linked itself to BLM. ActBlue, a fundraising platform connected to the Democrats, collects all donations to BLM, thereby encouraging the neo-Marxist, anti-Semitic actions of BLM, and sharing their aim of removing Trump from office. The Democrats’ interest is clear. The more instability BLM creates in the US, the more chance Joe Biden has of winning the presidential election in November. Suspicions have been aired that BLM are diverting some of their own funding to the Democrats.

BLM have been less than transparent when it comes to the funding of their UK chapter. BLMUK have yet adequately to explain what they have done with over £1.1million donated to them. Embarrassed supporters have quibbled over whether BLMUK is really the official representative, arguably as a means to excuse their anti-Semitic behaviour, but  BLM co-founder Patrisse Cullors has endorsed them and BLMUK is recognised by Twitter as such.

One prominent organiser of Britain’s BLM protests, perhaps fearing comeback on BLM’s revolutionary agenda and anti-Semitism, has claimed that the campaign has been ‘hijacked’ by a group of far-Left activists. This is disingenuous. BLM are far Left. They have been from their very beginnings.

Those who ‘take a knee’ or wear the BLM emblem are giving BLM free publicity even if they claim not to agree with everything the organisation stands for. Their support of BLM reveals them to be useful idiots. Together they are promoting and enriching those who wish to tear down the West and replace it with a socialist ‘utopia’. Its aim is self-inflicted, mass destruction, spearheaded by Marxists. No one, least of all the leaders of our political parties, should be under any illusion.