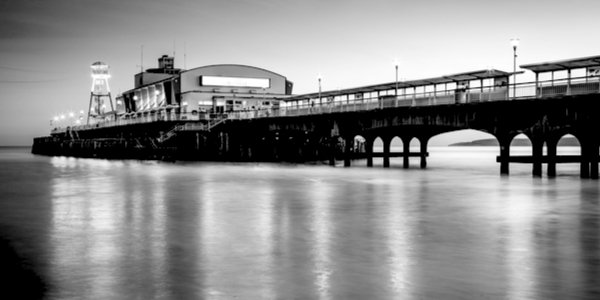 A story in six parts written for TCW Defending Freedom

IT WAS the pier that interested Jeremy Barkwright. You may have heard of him. He started out as a maverick historian with a reputation for revisionist hoopla. He published a stream of volumes around the turn of the twentieth century, the sort of book serialised in the serious newspapers – well-researched, erudite and somehow extracting a moral acceptable to the mores, manners and tastes of the baby boomer generation. Once he made the transition into television and began appearing in programmes about culture and art, the observant and instructed could easily spot a man on a mission. His ‘deconstructionist’ approach proved popular: he could explain the postmodernist package with little jokes that made the viewer feel that he, Barkwright, wasn’t a subscriber to the creed. If some critics called his conclusions somewhat specious, they tended to do it in what we might call the backwaters of the press. His outlook was the general one of that of his generation: a rather inchoate egalitarianism mixed up with an obstinate belief in all the other main precepts of the West’s cultural revolution of the past sixty years. Why, late in his seventh decade he wore red trainers with everything, including his Savile Row suits.

Now he was installed in a large room in the grand though slightly crumbling Metropolitan Hotel at Doghampton, a seaside town on the border between Kent and East Sussex. It was the end of September and Barkwright had arrived on a Thursday afternoon, which would give him a long weekend before his film crew were due to turn up on the Monday. They were making a television series about English seaside architecture, and Doghampton, with its wedding cake pier, wrought iron bandstands, winter gardens and Leas, seemed to him an excellent place to pelt once again those perennial Aunt Sallies: bourgeois hypocrisy, repression and social injustice.

Where possible Barkwright liked to spend a few days in a location before filming began, to spot anything that he might look good filmed in front of and gain local knowledge he could show off about. The town was much reduced; graffiti, vandalism, open drug abuse and welfare dependency had all played their parts. Barkwright had no interest in examining any of that, had covered it in a flick of a sentence in his script.

He gazed out of the window, which looked down on to an expanse of lawn at the side of the hotel, lined with tall trees. To the left he could see the bandstand among the ornamental flower beds on the Leas. Beyond them lay the beach and the blueish haze of the sea. The autumnal sunset crept across the lawn and glinted on the waves. Barkwright pulled the sash window up an inch or two. Sea air drifted in. He had been wondering how to spend this first evening but his indecision cleared at the smell of the sea. ‘A walk on the beach before dinner,’ he said to himself.

Crossing the Leas he noted the Victorian streetlamps were just lighting up, like a chain of pearls leading off into the dusk. That would make a pleasing establishing shot for the programme, he thought. Instead of walking on the beach he took a turn on to the pier. It would do very well, he thought, as the backdrop to his riffs on Victorian and Edwardian life. At the far end he stared out at the rapidly darkening sea. Here, he decided, he would animadvert on the hidden darkness of 19th century England. The wind was getting up and Barkwright turned back to his hotel for dinner. By the time he walked up the steps of the Metropolitan a storm was blowing in.

His table was next to windows giving on to the lawn. It was agreeable in the warmth and light of the dining room to look out on a perfectly foul evening. His steak was surprisingly good and his half bottle of claret the same. Afterwards he moved to the lounge, an old-fashioned, chintzy room. He ordered a brandy from the barman, whose name badge said Borys, and watched rain hammering against the windows. ‘That’s quite a storm,’ he said to the barman when his drink arrived. Other guests had drifted in. An elderly woman said, ‘Listen to that wind howling; it’s like an awful human voice.’ ‘Amazing thing, the imagination,’ said her husband.

They were probably over eighty, he thought. They sat on a sofa near him and the three fell into conversation, which led in time to a discussion about life in general terms and then, naturally, to death. Barkwright realised the Appleshaws, as he now knew them, had not recognised him from ‘the telly’ and obscurely felt that he could be a good deal more expansive than had they known who he was.

Somehow they got on to God. The Appleshaws admitted they were religious in a minor Church of England way; they felt that ‘there must be something afterwards’. They said this as if talking hopefully about dessert in a restaurant. Barkwright, who had retained the sneering atheism of his adolescence, could not let this easy target pass without a snipe, though one delivered with a smile. ‘How do you see this “afters”? A sort of holiday camp in mid-air? Lots of marble and ferns and tinkling music?’

The Appleshaws both smiled nervously. ‘You see,’ said Barkwright, ‘I think that we’re all atoms – energy. Energy has to go somewhere, but wherever it is, it is in this universe.’ He knew he sounded bumptious, like the contentious teenager he had been, and he felt slightly ashamed.

Tactfully, Mr Appleshaw said that he was sure that Barkwright’s view ‘had a lot to be said for it’. Mrs Appleshaw said once again she did not like the sound of the wind, that it sounded like some wretch groaning. ‘Oh, I wish they’d put a radio on or something to drown it out,’ she said.

They fell into silence and soon they all went up to bed.