NewsPaperthe art of publishing
HomeNewsBest of the rest – a doctor’s distress and is the Pope...
0

Best of the rest – a doctor’s distress and is the Pope a pagan? 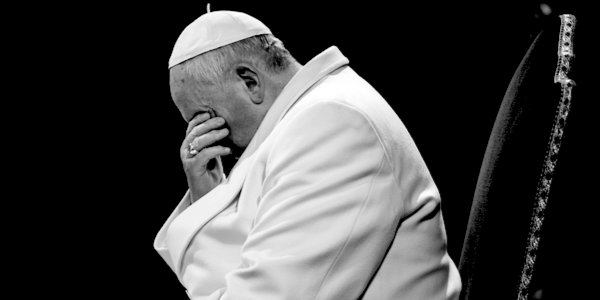 MY EYE has been caught by several articles this week that deserve to be shared, starting with a committed young doctor’s account of front-line working on a coronavirus ward.

Dr Shaan Sahota describes her hospital’s makeshift ‘Covid zone’ as a surreal world where patients ‘lie silent and a depleted staff complete herculean tasks’. It’s a revealing piece, not just for the Ebola-like precautionary kit they have to don before starting their shift, but also for the distress she feels for the seriously sick patients she is tending, unconscious and anonymous, absent of visiting kin and loved ones.

What also struck me was her description of inexperienced doctors, untrained in the basics, finding themselves responsible for routine ICU nursing as well as doctoring, and then, tellingly, her explanation of why this is – why they are under this pressure to perform every level of medical, nursing and care assistant task. She writes:

‘The most limited resource is not the ventilators, it’s the bare-bones workforce. Up to 50 per cent of our regular staff are off work through sickness, self-isolation and fear.’ (My italics)

It raises the serious question of whether panic – generated by government complacency and its failure to test and equip its front-line staff, further exacerbated by the media’s alarmism – is as responsible for the drastically depleted work force as the virus itself.

You can read Dr Sahota’s full account here. She is to be applauded (rather than clapped) for her commitment, compassion and her reporting honesty.

My next choice is an article by Jonathan Foreman, characteristically well-researched, which asks whether Chinese migrant labour in the fashion industry brought Covid-19 to Europe. TCW has previously set out several factors that helped catalyse the extreme nature of Italy’s Covid-19 crisis, Foreman now adds another. Contributing to Italy’s ‘perfect storm’ was its Chinese population, servicing the leather and textile industry in northern Italy, many brought over by partially Chinese-owned textile companies.

Foreman recounts how ‘in the days following the Chinese New Year on January 29, thousands of Chinese workers flew back to northern Italy from Wenzhou and elsewhere in China. Less than three weeks later, there was an explosion of coronavirus cases in Lombardy’.

You can read the full article here. https://thecritic.co.uk/the-italian-model/

Back home Fraser Nelson’s intervention on the costs of lockdown – the end of which we have been calling for on TCW – was welcome. He asks: Could the lockdown claim more lives than the virus? According to the government’s own modelling, he says, 150,000 lives are at risk through various side-effects (including suspended NHS services). You can read his (paywalled) article here. It engendered a worryingly unreasonable outrage, free for anyone to see on Twitter. Do people really think we should no longer be free to question government policy or debate its pros and cons any more?

I sincerely hope not.

Coronavirus should not allow us to take our eye off other balls. Mine was caught by a dramatic headline on Melanie Phillips’s website on Friday: ‘Is the Pope a pagan?’ By no means as wild a conjecture as you might think. Phillips draws attention to some startling remarks made by the Pope linking the pandemic to climate change. She writes:

‘Asked whether the economic devastation wrought by the virus was a chance for an ecological conversion by reassessing priorities and lifestyles, the Pope replied: “There is an expression in Spanish: ‘God always forgives, we forgive sometimes, but nature never forgives.’ We did not respond to the partial catastrophes. Who now speaks of the fires in Australia, or remembers that 18 months ago a boat could cross the North Pole because the glaciers had all melted? Who speaks now of the floods? I don’t know if these are the revenge of nature, but they are certainly nature’s responses”.’

They reveal the Pope to be a subscriber to ‘the anti-human, anti-science anthropogenic global warming scam which is based on dodgy computer modelling, ideological bullying and financially manipulated intellectual corruption’.

His remarks, she argues, ‘don’t just fly in the face of robust scientific evidence but are simply bonkers’ and asks, ‘even if it were true that man-made carbon dioxide levels were wreaking havoc upon the climate and the world’s ecology, how is that supposed to be connected to the virus? Is the Pope suggesting that if the world reduced its carbon emissions Covid-19 would somehow go away?’

You can read her full take on the disturbing things this tells us about the leader of the Catholic Church and what he believes here.

Finally, a more upbeat positive note: a post on the Migration Watch website has called out those Leftist liberal types who assume that we are dependent on migrant labour for seasonal farm work.

Three cheers for Migration Watch for being proved right for saying that the suggestion that Britons ‘would not do these jobs’ is offensive and inaccurate.

For their full account of British willingness to do seasonal agricultural work and how it can be further encouraged you read the article here and feel cheered.