Boris and Brexit Party are growing on the Tory grass roots

The regular monthly survey of the Conservative Home panel on who should take over from May gives Boris Johnson a significant boost. While the order of the top five contenders has not changed since the previous poll, Johnson’s 17.5 percentage points lead now over the second placed contender is his best performance since last September.

The ten percentage points increase in Johnson’s score is largely on the back of reduced scores for Dominic Raab and, particularly, Michael Gove, though all the front-runners have lost support to Johnson.

Rory Stewart, at 3 per cent and sixth place, is the first on the leader-board not to have lost ground to Johnson and he may be lucky that his intervention on Roger Scruton’s ‘interview’ with The New Statesman has so far gone unnoticed by his supporters. 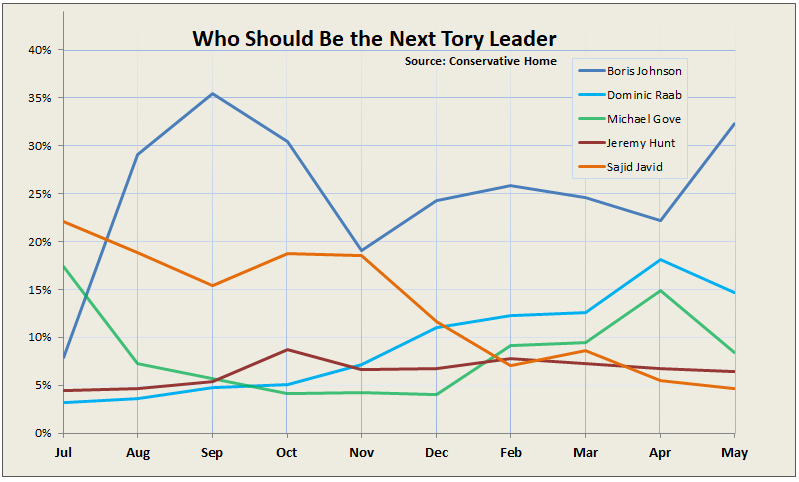 In the honk-honk clown car, sans wheels, sans doors, sans integrity, sans everything, Philip Hammond has enjoyed a modest surge that still leaves him comfortably below 1 per cent while Theresa May’s de facto deputy, David Lidington, has shed half of his fan base and now enjoys the support of one third of one per cent of the panel.

Amongst the top three, the outlook for Boris Johnson has improved and unsurprisingly his trend line is heading upwards again, reversing the trend from last month. Dominic Raab, despite his dip in support, still shows an improving tendency although Michael Gove’s trend line, in keeping with his larger latest drop in support, is now flat. 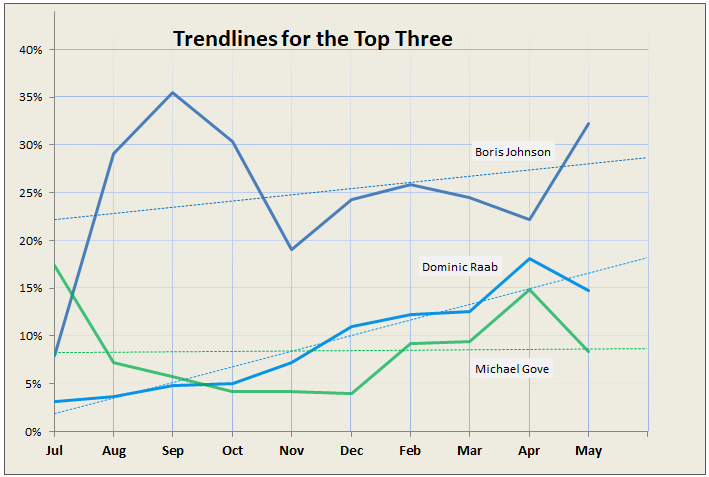 There are as many manifestations of Tory membership discontent as there are reasons for it, so whether the abandonment of March 29 as Brexit Day or the Prime Minister’s danse macabre with Jeremy Corbyn are more or less to blame are less significant factors in their own right than they ought to be.

One theory behind the Boris upswing is that the Conservative Home panel recognise what MPs have yet to grasp: Tories will have to pull a gargantuan rabbit out of the hat if they are to have any prospect of rebuilding support once the conterminous present shambles and Theresa May’s career close.

Conservative grass roots overwhelmingly understand that May’s replacement has to be the only man who can garner support from Labour voters, as Boris Johnson achieved in London, and who is also an unambiguous Brexiteer.

Asked which party would get their vote if elections to the European parliament were to go ahead, the response should have the power to astonish.

But the leadership of the Tory Party is now too punch drunk to be capable of astonishment. 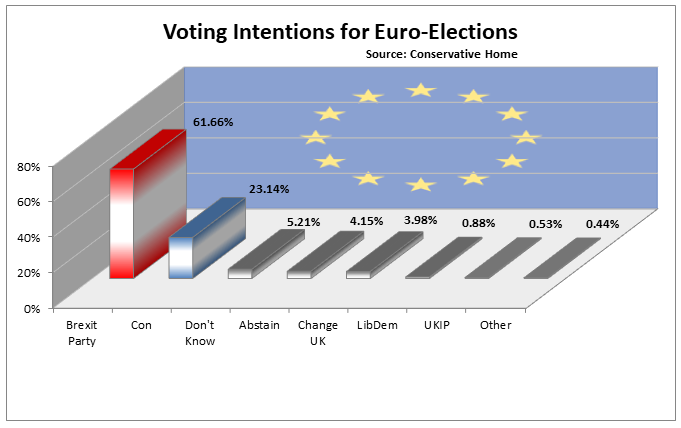 Almost three times as many (out of a total of 1,132 respondents) would vote for Nigel Farage’s new Brexit Party as would vote for their own party, and Conservative Home is clear that its panel members are not UKIP infiltrators or entryists of other kinds. These are traditional Tories abandoning their party because it has botched its core mission.

Easter weekend is traditionally a bonanza time for garden centre sales. Will the Tory top brass have taken the opportunity to stock up on the little bit of glyphosate needed to finish off its residual grass roots?

Or will these findings combine with the current and unprecedented agitations of the National Conservative Convention and persuade Conservative parliamentarians that there is only so long that they can continue in office while being in open revolt against their members and that the time for treating the membership as uppity has run out?