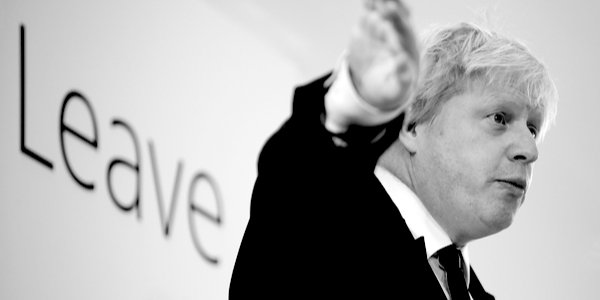 I can see some of my fellow conservatives think that perhaps Boris will ‘save Brexit’, riding to the rescue to somehow swoop in and become Prime Minister. This is not going to happen.

In this age of political madness, some like to compare Boris to Trump, calling him a ‘pound shop Trump’. This is meant as an insult – that Boris is some kind of fascist. I also think Boris is a pound shop Trump but not in the same sense. He is the pound shop Trump because Boris is cheap and he doesn’t have anything close to what it takes to be PM in the way that Trump became President.

Let me tell you about The Donald and the last election. Donald Trump had to make actual sacrifices to become President of the United States, and not just considerable financial sacrifices. Trump could have lived out the rest of his life on his big golden toilet in his big golden apartment in New York, mixing in liberal social circles (Donald is a NY liberal) while appearing on TV. Instead, he looked at the political scene of the GOP and the Democrats in the US and saw that the golden ticket to winning the election was to focus on getting immigration down and Making America Great Again.

This Trump strategy was successful because it appealed both to the working-class, blue-collar Democrats who have been ignored by their own party and to traditional Republican voters. It infuriated the elite in both parties: the corporate donors who get rich cheap off illegal labour in the Republican party, and the cultural no-border maniacs in the Democrats who want to import voters. So Trump won, and today large parts of both parties hate Trump. He is to some the most hated man in America where once he held the prime-time TV spot (that used to be held by Friends and then Frasier.) He will never be invited to another Upper East Side dinner party.

By contrast, Boris is an open borders globalist who would sell his compatriots down the river quicker than you can say ‘I am a citizen of the world’. He is part of the crumbling aristocracy that simply does not give two hoots about working-class Brexit voters and their concerns. He thinks the same about them as the rest of the media- BBC-Labour elite: that Brexit was a working-class tantrum or at worst a display of xenophobia. Boris would never propose a policy that would see him shunned by his own social circle. Never.

Ultimately Boris does not have what it takes to become PM. Just think of the amount of energy Trump must have had to campaign across 50 states (granted he left out the coasts which were already thoroughly blue). Trump doesn’t drink; that takes discipline. Boris would rather chew off his own arm than display that kind of discipline and dedication needed to win an election. Hell, he had a pretty good chance of becoming PM at the last leadership election (he didn’t even have to run a national campaign) and he blew it. He screwed it up supposedly because he missed or failed to make a phone call. That’s Boris!

Instead, the leadership was captured by a woman who had stayed out of the limelight and slogged her guts out for years at the Home Office, going home to her husband at the end of the day. I have my criticisms of May but let’s face it: she did Boris up like a kipper last time around and what’s more she made it look easy. That takes discipline, that takes dedication to the cause. May has both of these attributes, Boris does not.

And that is all before we get to Boris’s private life which is, to put it mildly, a car crash. Was he carrying on his latest affair while Foreign Secretary? It looks likely. This is grossly immoral, but even if you don’t care about this, it demonstrates yet again his utter lack of focus, his massive sense of entitlement that he can add this kind of complication to his life while holding a great office of state. Typical Boris.

And yes, of course Trump’s private life is no picnic, but it is highly unlikely he decided to carry on an affair while campaigning. Nor did he start divorce proceedings in the run-up to his nomination.

The thing is that to be Prime Minister you have to want it; you have to really, really want it. It is not just an idea on paper, or because lots of other people from your old school were PM, therefore it is only right that you should get your turn (that is Hillary Clinton kind of thinking – it’s my turn). You must be willing to make sacrifices. Boris Johnson doesn’t do sacrifice. He likes, in his own words, to have his cake and eat it. Boris Johnson will never become Prime Minster. You can take that to the bank.