NewsPaperthe art of publishing
HomeNewsBoris, the Blair in Tory’s clothing
0

Boris, the Blair in Tory’s clothing 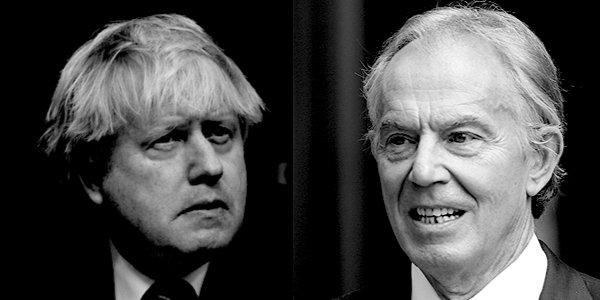 ON 15th December 2019, British voters gave the Conservative Party the largest Parliamentary majority since 1987, a reward for its promise to ‘get Brexit done’ and counter the Marxist madness that has slithered from the ‘liberal’ arts to infect the sciences, journalism, advertising, civil service and majority of the Parliamentary parties.

One might think that this new government would, in turn, reward its voters with fulfilment of its manifesto – with the low-hanging fruit, at least; the quick wins; the easy fixes – after years of elite frustration of popular will. Instead, this new ‘Conservative government’ has proven itself neither conservative nor government.

In the illiteral terminology that is normative in British-English, we refer to our elected administrators as ‘the Government’, and we ascribe to the whole of government the adjective of the party that won the most votes (‘Conservative’). However, Boris Johnson’s administration has proved itself the servant, not the master, of the legacy political elite.

This elite is still ‘progressive,’ which – in our Orwellian ‘double-plus-good’ discourse – is a figleaf term for a hideous Marxist triumph, defined by blatant racism, sexism, and authoritarianism. Whites are now the minority in British advertising; men are relegated in education and family law; and the popular majority is ignored, on the claim that it does not know what it is voting for, whenever it disagrees with the elite.

Worse, fashionable racism, sexism, and authoritarianism are normatively conflated as ‘liberal’ – a sickening appropriation of a term for the prioritisation of individual liberty. Literal liberals are conservative: they conserve the individual’s autonomy against the creeping incrementalism of government. Literal liberals must now refer to themselves as ‘classical liberals’ to differentiate from those who prove their ignorance and arrogance every time they vomit that awful conflation ‘liberal-progressive.’

The current political administration, led by Boris Johnson, as confirmed by a democratic majority on 15th December, could have used its majority of 80 Members of Parliament to reconcile elite politics with popular politics.

Indeed, its leading messengers suggested such a reconciliation: Dominic Cummings, as Johnson’s special adviser, reiterated his prior self-image as a political ‘insurgent,’ as someone who pays attention to what others ‘take for granted.’ Following the election, he went outside of government (via his own blog, no less) to recruit ‘mavericks’ and suchlike to reform the civil service. We expected fireworks. Instead, four weeks on, Cummings has hired nobody, despite more than 35,000 applicants, by his own account, amidst push-back from the civil service about proper procedure.

The Johnson administration has gradually shifted our expectations from fireworks to the same gruel offered by his predecessors.

For instance, the new administration has confirmed the old government’s short-sighted prioritisation of Chinese trade over Western security. By approving Huawei’s monopolisation of Britain’s 5G wireless networks, this government will enable spies in China to record our communications and movements. All this official talk of protecting the data from the infrastructure is insultingly dishonest, like pretending that paedophiles should teach in schools without opening their eyes.

In further imitation of the Blair administration, the Johnson administration is indulging in the most sickening spin, such as to characterise Huawei’s monopoly as diversification and competition, and to pretend that the decision wouldn’t affect Western intelligence sharing, even though the US and Australia have already said it would. The American reaction is best characterised as consternation: even the progressive media depict Britain’s official justification as a gamble.

I must point out too that the government’s spin at times seems incompetent, as if civil servants are writing for ministers the sort of content that is supposed to tip off the wider progressive elite about who is really in charge. For instance, the Defence Secretary’s name is at the top of this opinion published in The Times: ‘The decision we have made this week means the ball is now in Huawei’s and the Chinese government’s court.’ Oh, the irony!

Huawei’s triumph is a triumph for the liberal-progressive elite over the democratic conservative majority. Notably, the undoubted conservatives of the Parliamentary party are the most opposed, such as David Davis (the leadership contender whom the Parliamentary party rejected in 2005, in favour of David Cameron) and Iain Duncan Smith (the only classical liberal leader of the party since Margaret Thatcher).

In further evidence of elite triumph over popular expectations, the government has accepted advice from an unelected panel to reduce promised restrictions on immigration: the promised Australian-style points-based system will apply only to jobless immigrants; and the salary cap will be reduced below the average British wage.

And then there’s HS2, the vanity project initiated by the Labour government and confirmed by David Cameron, Theresa May, and (reports so far indicate) Boris Johnson too, on the pious but naive argument that southern conservatives can buy northern socialists with a railway. Northerners want local investment, not a new national folly. So far as they want a railway to London, they would rather improve the existing lines (the North-East line is a case in point, now under emergency public administration). HS2 just reinforces the link between metropolitan elites in Manchester and London, and reinforces the distance between elite and populace. The spiralling costs, even before a rail has been laid, further reinforce the perception. That the government still hasn’t realised this seems to me further evidence for the incumbency of an unreformed elite within government.

Then we get to Brexit. Really, could an administration elected to ‘get Brexit done’ mess that up too, like Theresa May and David Cameron and every other Conservative Party leader after Margaret Thatcher?

Well, look at the latest evidence: even before the general election the Johnson administration had agreed to a Withdrawal Agreement looking like the Withdrawal Agreement that Theresa May kept failing to push on the House of Commons. Johnson was a flip-flopper even back then, voting both against and for it, as May spun a cosmetic change here, a change of language there, as some great triumph of negotiation. Johnson’s Withdrawal Agreement is little different: Britain leaves the EU nominally tomorrow, but not practically; Britain remains beholden for a transition period.

Yes, the transition period runs out within the year, rather than years later, as May wanted. Indeed, public opinion seems credulous towards Johnson’s claim that he would walk away without a deal rather than extend the transition period. However, Johnson has already missed one deadline: as a party leadership contender in June 2019, he promised to leave the EU on 31st October. The public blamed Parliament rather than him for this failure, but I doubt it could forgive him for missing a deadline of 31st December 2020 – that would be 4.5 years beyond the referendum.

First, the public will surely condemn him for failing to return his promise of urgency. Do you remember all that talk about starting negotiations for free trade with the EU, the US, and everybody else before we formally are released from the EU’s prohibition on national negotiations? Now we know that it was all talk, that his administration won’t start negotiating with the EU until more than a month after we nominally leave the EU. https://www.theguardian.com/politics/2020/jan/28/eu-to-start-talks-with-uk-on-post-brexit-relationship-on-3-march

Given that the heady relief at Johnson’s victory on 15th December is over, we can expect the public to become much more inquisitive about the details of Brexit, including the reality that we are not actually leaving tomorrow in any practical or financial sense. Ring the bells and admire the new 50p coins, if you like, but we won’t be out tomorrow, and we still have no idea how far out we will be on 31st December. That’s a lot of time for the elite to water down what Brexit means.

The EU will play its old strategy of playing down the clock, sticking to ridiculous demands, in expectation of yet another extension. The Irish premier continues to predict extension, and to describe the EU’s negotiating position as stronger. He knows that Britain’s elite is not prepared to walk away.

If the Johnson administration doesn’t differentiate from the legacy, Johnson will become just another nominal leader of a political elite that would rather change its leaders than change itself. How ironic, for the people who call themselves ‘progressive’.

Share
Facebook
Twitter
WhatsApp
Email
Previous articleLament for the ladies-only changing room
Next articleAs China death toll rises, do we need a vaccine for the virus of State secrecy?