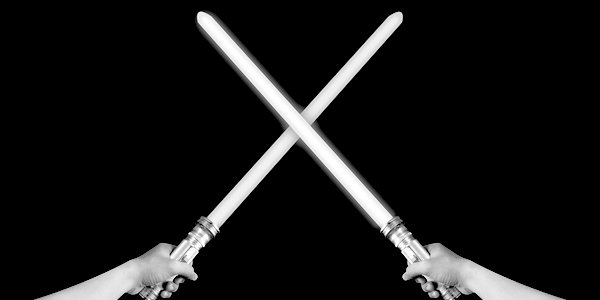 A FEW Novembers back at a public fireworks display, I saw a group of youths playing with toy light-sabres of the kind that had been first featured in the 1977 film Star Wars.

When I told them that I had actually seen this movie in the cinema when it was first released, they bowed in my direction and said ‘We are not worthy’. Party on, kids.

When I saw the film it was just called Star Wars and not, as it has since been re-titled, Star Wars IV: A New Hope.

The climax saw young hero Luke Skywalker piloting his X-Wing fighter down a trench of the evil Galactic Empire’s moon-sized space station, the Death Star. This gargantuan machine housed a laser so massive that a single shot could penetrate the core of an Earth-sized planet and cause it to explode, killing billions. And it was just seconds from firing on the life-supporting moon of the gas giant Yavin that sheltered the remnants of the Rebel Alliance. Skywalker’s mission was to fire at least one photon torpedo into a 2-metre-wide cooling vent. This vent led directly to the heart of this planet-killing device and would set off a chain reaction that destroyed the station. At the last moment, and with the aid of serious quantities of dei ex machina, Skywalker prevailed.

At the time, the prospect of a sequel was more of a wish than a certainty. Just before Skywalker fired his decisive rounds, he was about to be blown away by Darth Vader, who was pursuing in his personalised TIE fighter. After the station blew up, Vader’s fighter was last seen spinning out of control before Vader stabilised his errant machine and flew off.

Star Wars became Episode I of a trilogy, then Episode IV of a pair of trilogies, the second trilogy being prequels. The final film of a third trilogy is due for release. There have been at least one cartoon series and single spin-off films, as well as computer games and novels. There is a whole chronology where year zero is the Battle of Yavin described above. I could not have predicted any of these as I stood in a queue that stretched around the block at the Odeon Gants Hill in winter 1977. Over a period of four decades one film has become a multi-billion-dollar media franchise.

Which all brings me to Brexit.

Rather than two hours of a film, we have been experiencing two years of a process that is nearing its climax. Theresa Skywalker is flying down the trench of Britain’s membership of the EU with her backstop torpedoes, while being pursued by Darth Remainer. On her watch there have been calamities such as losing her majority, MPs crossing the floor, and a historic government defeat.

The problem with using popular culture as an analogy for political events is that it is either very funny or not funny at all, and rarely anything in between, so dear Reader, please forgive me if you remain unamused by my effort. But that is not actually the point I am trying to make.

Brexit is also a franchise, not an event. It will last decades, not years. There will be twists and turns. The current Withdrawal Agreement will not be the final agreement. There will be further negotiation. The UK is not signing a latter-day Warsaw Pact.

A real-life precedent is the tortuous transition of Germany from an Imperial autocracy to a stable representative democracy. Proper representative government had effectively been imposed on Imperial Germany by the Allies in 1918 as a precondition for negotiating the Armistice, but the country was more or less being ruled by decree in the Weimar Republic’s final years, due to a clause in the constitution that gave Kaiser-like powers to President Hindenburg. The entirety of what now remains of Imperial Germany only became fully democratic 72 years after the fall of the Wilhelm the Last.

It is to be expected that the passage of the UK out of the EU will not be anything like as convoluted, unpleasant, or long as the passage of the German people’s towards enjoying rights that we in the UK took for granted many years before they did. However, it will not be finally realised by anything that happens this month. We are but approaching the end of the beginning. The destruction of the evil empire’s planet-killing space station hopefully on March 29 is but the first tangible step that follows on from the arrival of two robots carrying the secret Death Star plans on the planet Tattooine back on June 23 2016. But like the Weimar Republic, there are strong political forces here trying to pull us back into the EU’s undemocratic embrace.

So we are currently at what might some day be retitled Brexit Wars IV: A New Hope in the whole franchise. The EU is the evil empire. The only real difference is that the Rebel Alliance never had traitors in their midst in this first film.