NewsPaperthe art of publishing
HomeNewsCall me a racist, but I say lopping off heads is barbaric
131

Call me a racist, but I say lopping off heads is barbaric 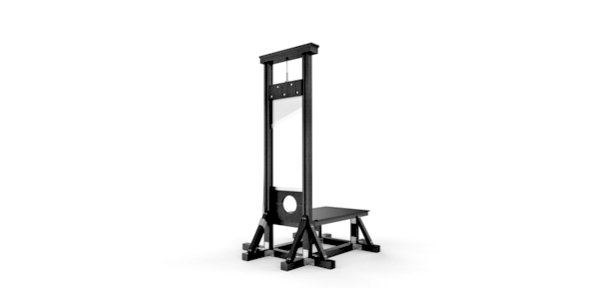 ON October 16 teacher Samuel Paty had his head hacked off by a jihadist in Paris. Paty’s ‘crime’ was to discuss the Charlie Hebdo cartoons of the Prophet Muhammad with his class. The killer posted a photo of the decapitated head with the message: ‘I have executed one of the dogs from hell who dared to put Muhammad down.’

The guillotine, the ‘National Razor’, was last used in France in 1977. The last beheading in Britain, of Lord Lovat, a Jacobite, was in 1747. Hacking off heads had been consigned to history. Now it’s back and no one among our mostly loudly concerned social justice warriors, in politics, education or the church, has shown an iota of disapproval. It seems that in the liberal classes there is tacit agreement that causing offence, even by drawing, deserves the severest punishment.

In September the Law Commission, which recommends changes to legislation, published a consultation document on reforms to ‘hate crime’ and ‘hate speech’ laws.

It suggests that the offence of ‘stirring up hatred’ should be extended beyond written material to include ‘inflammatory images’ and that anyone publishing these could face up to seven years in prison. It complains that the current law, covered by section 127(1) of the Communications Act 2003, ‘does not carry the same gravity as the inciting offences or reflect the fundamental harm involved, which is not that it is offensive, but that it incites hatred’.

The difference between French and British culture on the issue of free speech is stark. Two days after the killing of Samuel Paty, French Prime Minister Jean Castex stood with teachers’ associations and trades unions in Paris in support of freedom of speech.

There was a minute’s silence and a rousing rendition of the Marseillaise. Demonstrators also gathered in Lyon, Toulouse, Strasbourg, Nantes, Marseille, Lille and Bordeaux, all classes and political groups together, united by the idea of what French values are and determined to defend them.

‘It is terrifying to see that in France in the 21st century, a teacher can be decapitated in the street for doing his job,’ said Jean-Remi Girard, president of the secondary school teachers’ union. ‘Teachers are devastated but will not be cowed. We will continue to speak about freedom of speech. If there are difficult subjects, we will continue to teach them. We will try to encourage our students’ critical spirit and explain that everyone has the right to disagree.’

There has also been a marked difference in the Muslim response. A group of imams in Lyon met to discuss what they called ‘the appalling assassination of our compatriot by a terrorist who in the name of an uncertain faith committed the irreparable.’ The Organisation of Islamic Co-operation, representing 57 Muslim nations, spoke of their ‘well-known rejection of all forms of extremism, radicalisation and terrorism for any reason or motive’.

It’s as if we are living in Tudor England where beheading is a normal procedure not worthy of comment. I contacted many of these groups on Twitter, seeking a response. The National Education Union (NEU) which approved mass BLM marches at the height of the pandemic, and has a large website with a ‘Mission Statement’ about making everything better for everyone, did not reply. Their main concern is attacking the government on their policy about getting children back to school.

The Association of Head Teachers & Deputes in Scotland didn’t reply and said nothing online. Nor did the National Association of Head Teachers, motto, ‘Strength and Diversity’. The NASUWT, who call on members to ‘get active’ (in radical politics of course, not sport) have a big splurge dedicated to Black History Month. No mention of the teacher killed in France who left a wife and child.

No response came from Sadiq Khan, Muslim mayor of London, or Islamic groups. The Muslim Association of Britain are busy fighting a group called ‘Muslim non-believers’. The Muslim Public Affairs Committee have joined with the far-left Antifa, BLM movement. Hizb ut-tahrir is too preoccupied with bringing about a ‘Return of the Islamic World Order’ to care about the murder of one infidel, as that is what they believe he was. Their website tells us that ‘Where secularism has failed Islam will succeed.’

The Archbishop of Canterbury said nothing this time, as he said nothing in July 2016 when a French priest had his throat slit by two followers of ISIS while he was saying Mass. Broadcasting and publishers have refused to criticise radical Islamists.

From the Left there have been no calls to ‘take the knee’ in memory of the dead man. We’ve heard nothing from Afua Hirsch, so keen to pull down public statues representing evil oppressors. She recently retweeted a message from an Observer journalist blaming Home Secretary Priti Patel’s’ anti-immigration rhetoric’ for a knife attack in London. Nothing has been heard from Naz Shah, Shadow Secretary for ‘Community Cohesion’.

As the Black Lives Matter movement put it so loudly and so often, silence is complicity. This indifference to the street execution of a Christian by a Muslim in France shouts about attitudes among the UK’s woke elites which now dominate education, Whitehall and the Church of England. They all now accept that it is a sin to criticise Islam, terming it ‘Islamophobia,’ while Muslims call it Blasphemy. Their aim is the same: to censor and close down criticism.

President Macron said that Samuel Paty died for teaching that we all have ‘the freedom to believe or not believe’. Here that freedom is being destroyed by a silence which reflects our current values. It’s perhaps no accident that Paty was a history teacher. In the UK, unlike the rest of Europe, that subject is regarded with suspicion from the Left and seen as too contentious. Unlike France, ‘difficult subjects’ are not welcome in our classrooms. While in most countries people know their own history and have a clear idea of their national values, here the idea that British values even exist is subject to withering scorn. Such is the self-hatred we now live by that we see the rise of something which sounds increasingly like apartheid.

This was expressed in 2016 in a video called Against ‘Integration’ by the Muslim commentator Ash Sarkar. She rejected integration as a coded ‘racist discourse in which people of colour must assimilate into social relations which have been deemed civilised by a white-supremacist state.’

If she and the Law Society get their way and set new parameters for what British people can say, send, write and draw, free speech will be as dead as Samuel Paty. That will be a victory for the terrorists. Like many older Brits, and the French, I still think that satire and the freedom to give offence are a vital part of democracy, but lopping off heads is not civilised. Call me racist if you like.