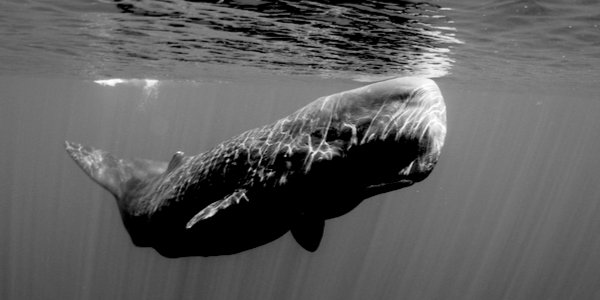 HERMAN Melville’s novel Moby Dick is as penetrating a study of destructive obsession and revenge as you will find in the history of literature. I read it long ago and little of it has stuck; however certain scenes from John Huston’s 1956 film version, which I first saw as a child, remain vivid in my mind. Captain Ahab’s white wooden leg pounding the deck night after night; the longboats chasing whales; Ahab nailing the doubloon to the mast: a reward for the first man who spots the white whale; Queequeg’s coffin rising from the abyss to save Ishmael, and of course the climax when Moby Dick leaps out of the sea, looks Ahab (Gregory Peck) right in the eye and sets about killing and him and destroying his ship, the Pequod; and the mad captain, dead, entangled by rope, lashed to the white monster and dragged away to the depths while mysteriously beckoning to his crew.

Remind you of anything? Yes, that’s right: Theresa May and her obsession with remaining in the EU. It’s not Captain Ahab, it’s Captain Mayhab, and if she keeps up her obsession things could end in a destructive finale.

At dawn on that momentous morning of June 24, 2016 (how long ago it seems now), my first thought – after jumping about on the settee – was quite simply, ‘How will they stop it?’ By which I meant, it will be stopped but what use of verbal sleight-of-hand and media legerdemain will be employed? As soon as David Cameron had excused himself and gone into the ship’s library with a pistol and a decanter of whisky and Captain Mayhab was given command of HMS Great Britain, I knew we would be in for an Oscar-winning performance from a top-class political mountebank.

I sometimes wonder, a tad gleefully it must be admitted, what went on in the houses of the political, legal, mercantile, media and educational elite that Friday morning. Blimey, it would have been a right old laugh to see. How bad did it get? We have never been told. Did Vince Cable roll around on the living room floor screaming? Did George Osborne kick the Downing Street cat? Imagine the civil service going back to work that following Monday morning. Imagine the fear! Fear of leaving Brussels and a worse terror than that: the prospect of having to do some actual work!

However, after the snot, tears, rage and curses subsided, after emergency sessions with psychiatrists, and wealth management firms and accountants had been booked, it all came down to getting the story straight. Captain Mayhab’s millennial shipmates thought up a rallying cry for the poop deck: ‘Brexit means Brexit’. I hesitate to bring Joseph Goebbels, the Reich Minister of Public Enlightenment and Propaganda, into this, but that little Christmas cracker motto of Captain Mayhab’s was well in line with the Nazi midget’s dictum: ‘If you are going to tell a lie, tell a verdammt whopper.’

Of course, ‘Brexit means Brexit’ (not often heard these days) actually meant ‘Brexit means Remain with all the names changed and everything buried in waffle, obfuscation and complication’.

This we know. Brexit means Brexit morphed into ‘no deal is better than a bad deal’ which in due course became something else when Mayhab appeared before the Liaison Committee of Select Committee Chairs. By this point she said that the ‘only acceptable’ choice MPs had was ‘to form a majority to ratify the Withdrawal Agreement’, which all Leave voters now recognise as Remain in disguise.

It will be remembered that by the latter stages of Moby Dick the crew of the Pequod were pretty worried about Ahab’s monomaniacal pursuit of the white whale. As well they might: the ship ends up smashed to matchwood by Moby Dick and Ahab dragged under the waves by him.

Captain Mayhab’s white whale is her Brexit in Name Only deal, and the Pequod is the Tory Party, that hollowed-out, pathologically dishonest organisation that has as much similarity to genuine conservatism as cream soda has to champagne. Many Tory MPs must be worried. Like rats in a laboratory maze, they scamper around looking for a way out of the bind, but it is not there – and now the knell of the European elections is approaching hard on the heels of the Tories’ most disastrous local elections for 20 years. Then there is the spectre of the Brexit Party’s sky-high poll ratings.

Captain Mayhab was put in charge because she was a Remainer who had the Blair forked tongue technique down pat and hitherto had displayed the number one political class attribute: the ability to go into a revolving door behind someone and come out in front. No longer. Now hapless Mayhab could take the whole ship down with her. Has the level of the public’s rage and sense of betrayal penetrated Number Ten? I doubt it. Who on the quarterdeck will replace her? Who cares? It will be more of the same.

The past three years have provided many hard lessons for the political class, almost all of which they have failed to learn. They clearly think that with a fair wind and the help of their media backers, they will manage to hoodwink the public and get matters back to the pre-2016 days. Perhaps they will but I find it hard to believe. The cat is out of the bag and more ‘indicative votes’ will not help.

Is this the end of the long-running two-hander Whitehall farce of Tory and Labour? May it be so. Will Mayhab be dragged under by her deal? It seems inevitable. There she is, lashed to her withdrawal agreement, beckoning her MPs to follow . . . Thar she blows!