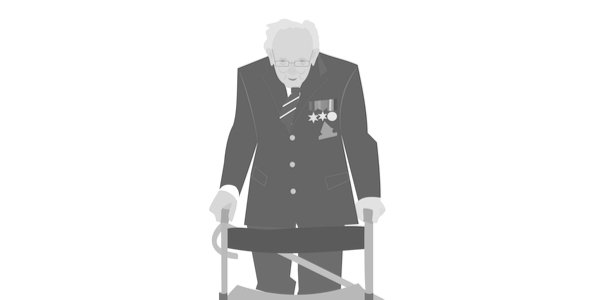 BORIS Johnson’s latest mad idea – right up there with Lord Ashcroft’s mad idea last year that the NHS should be awarded Britain’s highest peacetime gallantry award, the George Cross – is to put up a statue to the late Captain Sir Tom Moore.

You can imagine the conversations this will one day provoke.

‘Grandpa, who is that man?’

‘Not exactly. He was in the war, but not in a combat role. Mainly he taught people how to drive tanks and ride motorcycles.’

‘He walked up and down his garden lots of times on his Zimmer frame.’

‘You’re joking. No one would get a statue for that.’

‘Yeah but lots of very old people walk up and down their gardens, even without Zimmer frames.’

‘Ah yes, but what you have to remember is the early 2020s was a very weird time indeed. Nothing made sense at all.’

De mortuis nil nisi bonum. ‘Too soon’, as the Twitter version has it. I mean absolutely no disrespect to Captain Tom. I’m sure he was a lovely, game chap with delightful old-fashioned manners, a sense of humour and a can-do spirit. I think it’s absolutely wonderful that he got to spend the last year of his long life having such fun: a knighthood, a Battle of Britain flight flypast, a free holiday in Barbados.

What I don’t get at all, though, is the mix of ostentatious lachrymosity and canting panegyric (‘He was the best of us’) surrounding his death at the ripe old age of 100. The reason we have heard of Captain Tom is not because he had ‘a good war’, as many still-living MCs and DFCs and DSOs did. And it’s not because walking 2.5 kilometres in instalments on a Zimmer frame, even aged 99, is anything to write home about. I know of at least one 101-year-old who regularly does the same, unaided, in one go.

No, the reason for the cult of Captain Tom is that we are being played by a very cynical and devious political and media Establishment. Captain Tom has become a government propaganda tool. He is our equivalent of Alexey Stakhanov, the Russian miner celebrated as a Hero of the Soviet Union because he dug out such stupendous quantities of coal.

Stakhanov’s propaganda function was to inspire the workers to similarly heroic heights of productivity. Captain Tom’s propaganda function was twofold. First, he helped promote the ongoing myth that the NHS is not merely our national treasure and the envy of the world but something so important that our economy, our freedoms, even our lives should be sacrificed to guarantee its survival. Second, his service record (no ex-soldier retains the rank of ‘Captain’, by the way) invited dishonest comparisons with the Second World War, heavy-hinting that Covid-19 is our Hitler, our Mussolini, our Tojo, which if we all pull together we can beat.

Both are massive lies and I really oughtn’t to have to explain why. But in this climate, maybe I’d better. The purpose of a National Health Service is to serve (the clue is in the name) the populace, not the other way round, and if it’s really so amazing it shouldn’t need staged, Stalin-style, clapping events to remind us of this alleged fact. As for the Second World War, it was an existential struggle between good and evil in which there were many millions of excess deaths; Covid-19, on the other hand, is just a fairly bad flu blown completely out of proportion.

It’s shocking how many people don’t get this, even those on the sceptical side of the coronavirus argument. Quite a few, I was unimpressed to notice on Twitter, couldn’t resist parading their niceness by paying tribute to this great hero and greeting his death as ‘such terrible news’. Since when was dying at 100 surrounded by your family a ‘terrible’ thing? Surely for most of us it would be our fondest wish? And what exactly was the preferred outcome in this scenario – that medics should suddenly have discovered the elixir of life, enabling Captain Tom to live for another century?

If you think I’m being heartless or unduly argumentative on this point, consider the bigger picture: for nigh on a year now, millions of people have had their lives devastated, their businesses crushed, their jobs destroyed, their freedoms stolen, their mental and physical and health jeopardised, their education denied as a result of wantonly bad government policy. The job of any responsible, intelligent, critical thinker is to expose and oppose this outrage at every turn, not tacitly to endorse it by playing into the bully state’s mendacious, devious propaganda narrative.

Clapping Captain Tom is not a politically neutral exercise. It’s an effective acknowledgement of the political/media Establishment’s Overton Window of permitted debate. It plays along with the official line that while all this oppressive nonsense we’ve experienced recently is unpleasant, it’s a great national endeavour of which we should all be proud, which we shouldn’t question and for which we should all cheerfully do our bit just like Captain Tom did.

Mine is an argument you’re unlikely to see commissioned or published in any of the newspapers which the government has been keeping afloat with £100million plus of Covid propaganda advertising. Funny that, eh?