Caroline and Sarah – cuckoos in the Totnest

MEET Caroline Voaden, the ‘Liberal’-‘Democrat’ MEP for the South-West region of England. What a delightful piece of work she is.

Unaccountably, Caroline has not hitherto impinged much on the national consciousness, despite costing us (amounts subject to fluctuations in the sterling-euro exchange rate) a no doubt disproportionate share of the following: her annual MEP’s salary of approximately £90,600; her ability to claim more than three times as much as that in expenses; her general allowance of £46,680 a year; her £257,974 annual staff allowance paid directly to employees; her personal annual travel allowance of £3,675 and her £275 daily attendance allowance for each day that she signs the register in either of the European Union’s Potemkin Parliaments in Brussels or Strasbourg (but is not thereafter obliged to participate in its proceedings).

However, that relative anonymity started to dissipate recently, when she ostentatiously ‘welcomed’ the serial defector Dr Sarah Wollaston MP, the member for Totnes, to the Lib-Dems in her own constituency. 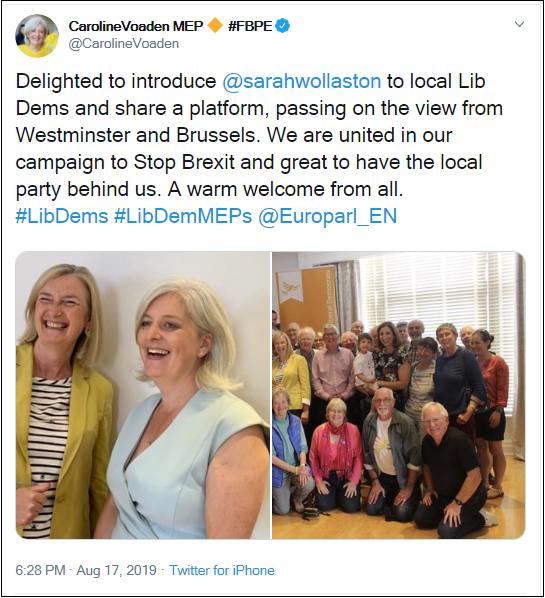 Wollaston, of course, will need little introduction to most TCW readers. She always was more of a closet Lib-Dem inside the ‘Conservative’ Party than a true conservative, having become its candidate for the Totnes constituency via an innovative Open Primary which the Tories managed to botch spectacularly, firstly by allowing anyone to vote in it regardless of their political affiliation, and secondly by not sufficiently checking the politics of the applicants.

She initially declared for Leave in the run-up to the 2016 EU Referendum, only to defect noisily to Remain mid-campaign in what many suspected was a put-up job aimed at discrediting the Leave campaign by her ‘defection’.

Given that Wollaston, despite being the allegedly-‘Conservative’ local MP, was always ideologically closer to the Lib-Dems, one might wonder why she needed ‘introducing’ to their local members and supporters at all. We’ll let that pass for the moment, however, because we’ll return to it later.

Not content with that somewhat idiosyncratic and self-serving interpretation of representing the people, however, Voaden went on casually to disparage a significant number of her own South-West England constituents. In response to mischievous comments on social media about the overwhelming predominance of white faces among the local supporters of the fanatically ‘diversity’-worshipping Lib-Dems, she tweeted thus:

What a charmer. A regretful ex-habituée of Leftie North London, who’s happy to be aboard the Brussels gravy train to ‘represent’, inter alia, Totnes, where she actually sees her job as representing Westminster and Brussels to Totnes rather than vice-versa, while castigating its residents by implication for being 95 per cent white.

With hindsight, we should perhaps have been forewarned by Voaden’s contribution to the Bournemouth hustings for the 2019 EU Parliament elections. ‘Our democracy is completely broken,’ she claimed, while curiously neglecting to add that a major cause of its fracture is ‘Liberal’-‘Democrats’ like herself who refuse to accept the largest democratic mandate for one specific policy in UK political history, and are determined to deny, dilute or preferably destroy it.

Her experience as a Reuters reporter in the former Yugoslavia, she insisted, gave her an insight into ‘a country being torn apart by nationalism and hate’. Whether she was specifically equating the Britain that voted for Brexit with the warring nations of the former Yugoslavia was not clear; in the light of her remarks since, that’s surely a plausible inference.

Perhaps someone should have reminded her that the break-up of Yugoslavia provided an ominous example of what can happen when disparate nations and peoples are subjugated against their will in an overarching authoritarian polity which denies them proper political representation, self-determination, and self-government within independent sovereign nation-statehood.

As you might have expected by now, Voaden was both prominent in, and unapologetic sbout, the Lib-Dems’ puerile ‘Bollocks to Brexit‘ T-shirt display at the opening of the EU Parliament’s current session. . . 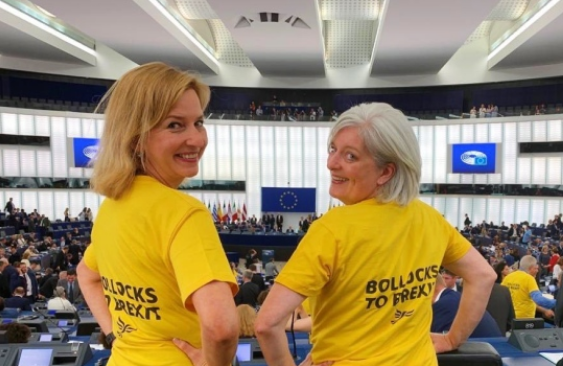 . . . thus demonstrating a distaste for decorum every bit as keen as her evident distaste for democracy. She was somewhat less insouciant, though, when robustly confronted by Piers Morgan on Good Morning Britain over this infantile, anti-democratic exhibitionism, and was eventually, despite repeated attempts to dodge the question, forced by him to swear on live TV.

Not long afterwards, Voaden distinguished herself by apparently finding some fishermen in Newlyn, Cornwall, who don’t think Britain’s fishing industry has been devastated by EU membership and the depredations of the Common Fisheries Policy, and actually want to stop Brexit in order to protect it. 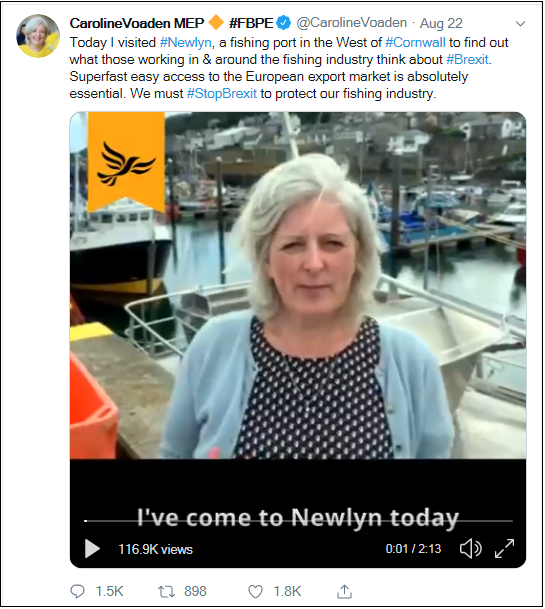 At least that’s the impression which a quick, casual read of Voaden’s tweet above would convey, isn’t it? So why, then, the ‘apparently’? Well, look again at the sophistry implicit in the wording she used: not ‘fishermen’, as you might expect, but ‘those working in and around the fishing industry’ – which isn’t necessarily the same thing.

It seemed that her principal interlocutor and source for her ‘findings’ might not have been a working fisherman at all, but one Chris Ranford, whose job it is to help distribute grants from the European Maritime and Fisheries Fund (of which, it will be noted, the UK is far from being the largest beneficiary). In other words, an EU bureaucrat paid to give back to the UK fishing industry some of its own money, minus a Brussels-skimmed handling fee. Which perhaps makes the conveniently anti-Brexit emphasis of Voaden’s ‘findings’ rather more explicable.

To describe Voaden’s tweet as, at best, disingenuous, would be perfectly justified, though to do so might perhaps be condemned by her as a churlish act of lèse-majesté, given the tenor of her reply to two sceptical Brexit Party MEPs, at least one of whom, June Mummery, really does know what she’s talking about when it comes to the baleful effects of EU membership on our fishing industry.

Only a few weeks ago, Voaden was, naturally, overjoyed that the fanatical Euro-federalist, scourge of nation-state democracy and implacable enemy of Brexit Britain, Guy Verhofstadt, graced the LibDems’ annual conference with his presence. Verhofstadt, it will be recalled, has recently called Brexiteers ‘traitors’  – curiously attracting from Remainer-Left MPs none of the outrage with which they frothed at the description of their own Parliamentary and legislative chicanery as ‘betrayal’ and ‘surrender’ – and he clearly felt comfortable among ‘Democrats’ so ‘Liberal’ that they pledge to reject and strive to overturn any further referendum, by whatever name called, which again delivered a Leave outcome.

Wonderful to have @guyverhofstadt with us here at #LDConf. He reminds us that we can only defend our shared values and principles on an increasingly polarised world stage when we work together as a united front against forces that seek to divide us. #LDConf pic.twitter.com/SIwt0zAsPS

As for that ‘defending our shared values and principles’, I wonder what Voaden’s reaction was to the speech Verhofstadt delivered, insisting that the age of sovereign democratic nation-states was past, and that the New World Order of the future was supranational empires like the EU. I suspect she wholeheartedly approved, and that any comparison with the ongoing brutal repression of pro-democracy protesters in Hong Kong by the empire that is Communist China simply would not have occurred to her.

But all this may be a blessedly temporary irritation. To get back to mid-August and Totnes, one delightful irony has emerged. Because the Prospective Parliamentary Candidate already selected by the Lib-Dems to fight Totnes at the next Westminster General Election was reportedly objecting to potentially being supplanted by the turncoat Wollaston. And that PPC was none other than . . . yes, you’ve guessed it, one Caroline Voaden. Which may just put her effusive ‘welcoming’ of Wollaston to Wollaston’s own constituency in a rather different light.

Hopefully, the chances are that neither Voaden nor Wollaston would be elected anyway in Totnes, many of whose Conservatives were resolved, even a year ago, to rid themselves of the LibDem cuckoo in their nest. And that even if we don’t finally leave the EU until after 31 October, as one of the peripheral benefits of Brexit, both the ‘Liberal’-‘Democrat’ MP and MEP covering Totnes will soon be out of a job. With any luck, we shall not see their like again.

This is a revised and updated version of the article originally published at the author’s own blog, A Libertarian Rebel, on Monday 26 August 2019.