NewsPaperthe art of publishing
HomeNewsCaroline Farrow: Ghost of Christmas past. A tangerine in a stocking not...
5

Caroline Farrow: Ghost of Christmas past. A tangerine in a stocking not a living room of tat 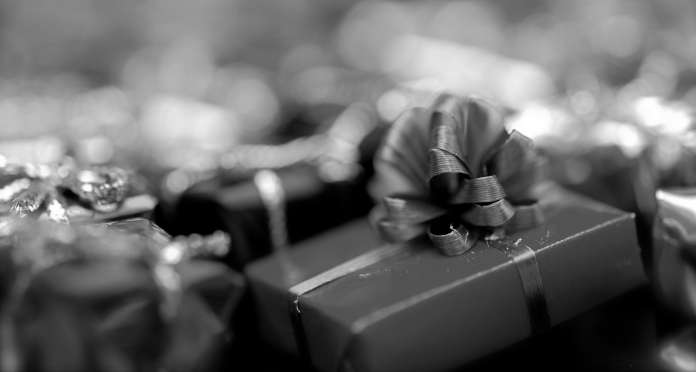 I wonder how many frazzled parents, especially those faced with ‘out of stock’ notifications for the most-wanted items on their children’s Christmas lists, have been tempted to follow the example of the Henderson family from Utah and cancel the giving of gifts at Christmas altogether?

The thought has certainly crossed my mind more than a few times, especially when faced with a clutch of over-excited recalcitrant children, demanding biscuits while busily browsing through copies of various Christmas catalogues, illicitly purloined from under my bed! I therefore  had more than a modicum of sympathy for John and Lisa Henderson’s decision after they became so fed up with their three boys’ “ungrateful, entitled and disrespectful behavior” that they decided that instead of writing to Father Christmas for presents, they should be spending their time learning the great pleasure to be found in giving.

Instead of getting caught up in the great present-buying frenzy, the family have been undertaking various community projects, such as sending Halloween candy and clothing to a typhoon-hit village in the Philippines. They’ve also invited several older widows and nearby couples who would otherwise be on their own, to join them for Christmas dinner.

While on the one hand my initial reaction was that this cancellation of Christmas seemed rather Draconian, especially considering their youngest child was five and therefore ought to be granted some leeway, all is not lost for the Henderson children. They will still be receiving presents from other relatives (who will no doubt attempt to make-up for any perceived deficit) and the family are still embracing the other traditions of Christmas, such as decorations and festive food.

Every year, my heart sinks further and further as I see friends’ Christmas Eve Facebook photos, displaying veritable mountains of beautifully wrapped gifts for their offspring. One of the realities of having a larger family is that there simply aren’t the resources available to buy every child several presents. But while it’s tempting to believe that somehow your children might be missing out or deprived when compared with others, actually the habit of filling the living room,wall to ceiling, with presents, is a relatively new phenomenon.

Certainly I don’t remember receiving the overwhelming amount of presents one sees pictured these days – Christmas consisted of an exciting stocking at the end of the bed, containing a few pieces of chocolate if we were lucky, along with the obligatory tangerine, and one pillowcase under the tree. It was the very act of receiving a present which was exciting as opposed to the sheer volume. Added to which my sister and myself rarely composed letters to Father Christmas (another relatively new tradition) so half the fun was wondering precisely what the present might be and I don’t recall ever feeling disappointed. We derived pleasure from playing with whatever it was that our parents had deemed appropriate for Father Christmas to bring us and they rarely got it wrong. As we got older, we inevitably succumbed to the perils of advertising and I remember dropping copious hints for one thing or another, but it was never a given, and neither were there tantrums if something had not been able to be procured.

Modern society has become so reliant upon instant consumer gratification, where everything is so easily come by, that it takes a superhuman amount of time and money to make Christmas stand out as being special, which is why every year parents seem to be on a mission to make every single Christmas bigger and better than the last one. The only way, we are told by the retailers, to make a splash is by spending copious amounts of money to make sure that every single detail of Christmas is chocolate-box perfect; from the carefully chosen outfit to wear on Christmas Day itself, the co-ordinated table decorations, and piles and piles of extravagant presents for all.

It all seems a far cry from my youth where we were excited when mum put out the familiar old paper tablecloth festooned with holly and set the table with the china and glass wheeled out on special occasions only. No-one noticed whether or not the crackers matched or were ‘luxury’, having them on the table was in itself a treat!

In fact, at risk at sounding curmudgeonly, the modern Christmas has for many, transformed into altogether a more depressing occasion, nothing more than an annual ritual of forced jollity and consumerism, which they are glad to see the back of come Boxing Day. But we shouldn’t allow ourselves to succumb to the Scrooge sentiments that give welcome succour to the secularists. Already we see increasing pressure to strip Christmas of its meaning altogether with schools either abolishing the nativity play or altering it out of all recognition, and the proliferation of ‘Seasons Greetings’ cards sent by politicians and public bodies, lest they should offend any non-Christians. It won’t be long before there are calls to officially abandon the Christian recognition of Christmas altogether.

Cancelling Christmas and present-giving is not the answer. No matter how admirable the Hendersons’ attitude may seem, just as Christmas is not about unchecked materialism, neither should the reception of gifts be dependent on a set of conditions being met. God’s gift to us of the Christ-child was free, unearned and undeserved, a spirit which should be echoed in our own giving and receiving.

Christ didn’t come amid a glut of soon-to-be-forgotten material tat. He was a precious gift, freely bestowed, God’s benevolence being hopefully anticipated. not petulantly demanded. Lisa Henderson is right: at Christmas we should learn about serving and giving to other people, but if we want to foster this attitude in our children, then we need to do it all year round, rather than at one specific time of year.

So here are my tips for those looking to reject the shallow glitter this year. Put your Christmas tree up and leave your preparations as late as possible so that by the time everyone else is sick of the cheer, you are just beginning to enjoy it. Remember that Christmas Day is the start of an Octave – 8 days of prolonged feasting and celebration. Banish smartphones and tablets, so that families can actually sit down and enjoy each others’ company rather than being trapped in solitary parallel worlds.

Perhaps if we were more willing to deprive ourselves at other times of the year, we would be in a far better position to appreciate the abundances of Christmas.  But above all remember that one well-chosen thoughtful gift or gesture given out of love, devoid of conditions will be fondly remembered, treasured and loved for generations.

Share
Facebook
Twitter
WhatsApp
Email
Previous articleJonathan Cockfield: The poor can’t cook. The Right use language to convey meaning and the Left to obscure
Next articleReader’s Comment of the Day: The English can’t cook