NewsPaperthe art of publishing
HomeNewsCaroline Farrow: Gorillas give us a lesson in baby care
1

Caroline Farrow: Gorillas give us a lesson in baby care 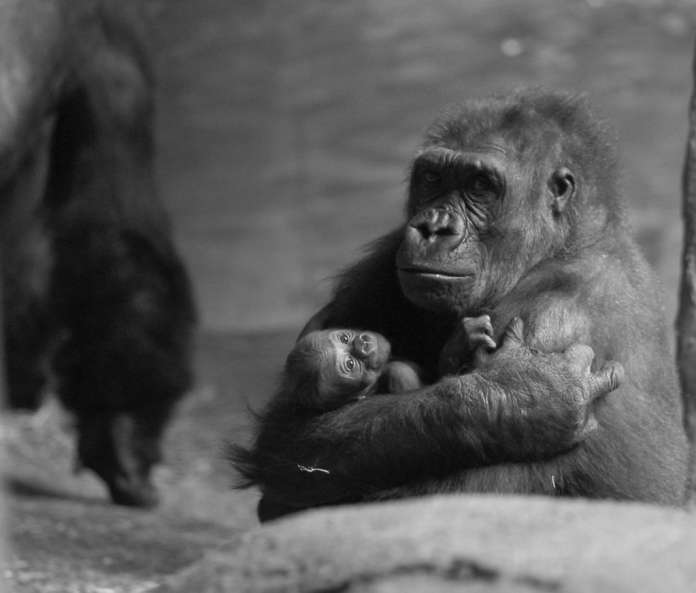 The print edition of the Daily Mail ran a feature on Ozala, the endangered lowland gorilla in captivity at Twycross Zoo in Leicestershire, who has just given birth, together with some gorgeous photographs of the mother tenderly and protectively cradling her newborn.

Two things stood out. First, was the way in which the mother gorilla handled her newborn, holding him or her so firmly and protectively to her body, that keepers have as yet been unable to determine the sex of the baby. In common with human newborns, the baby is being handled and acting as if it were an extension of the mother’s body. You can see it, using all of its gripping and clinging power to stay firmly attached to its mum. You would not see this mother attempting to put her baby into a separate cot or room to sleep.

The photos embody the desperate need that mothers and newborns have for each other, and while cynics will point out that there is a difference between humans and gorillas, it is worth remembering that gorillas are our second closest relatives in the animal kingdom. The genetic material of apes is identical to that of humans to a very large degree. An analysis of certain genes demonstrated a difference of only 1.6 per cent between our two species and of all the apes, gorillas’ hands and feet most closely resemble those of humans.

So when we look at the photos of a gorilla female holding her newborn baby from whom she refuses to be separate, it should remind us of how attachment parenting is not just some new hippy fad, but a primordial instinct and one that is still practised by other mammals, who understand that their babies have an intense need for the physical presence of a consistent, loving and responsive caregiver. A role that naturally falls to the mother, who has already developed an intimate physical bond with her child throughout the duration of her pregnancy.

The fact that attachment parenting is looked down upon by so many, and that we are so keen to get mothers back into work as soon as possible, demonstrate how we have lost touch with the instinctive art of mothering in our society. New mothers now need instruction in terms of how to bond with their baby – they are given literature on how important it is to switch off the TV for at least an hour a day in order to chat to their baby and aid speech development, how to make eye contact and given advice about detaching from their smartphones and not leaving their child all day in a car seat or pushchair.

Indeed, this is why early years education and nursery is being promoted from an ever earlier age. It is not just to get women back to work, but also to ensure that the baby supposedly is in an environment where it can be stimulated and ‘learn’, because most mothers’ (especially ones in low-income families) skills are presumed to be so lacking.

Babies are not supposed to be carted about in a designer pushchair leaving a mother with free hands to juggle a Starbucks and update Facebook, but as Ozala shows, to be held. Baby-wearing, which was practised for centuries, enables an infant’s need for physical contact, affection, security and stimulation and movement, while the mum is able to get on with her life, but involving and engaging her baby, rather than keeping it separate and distant.

Unlike baby gorillas, human infants have lost their ability to grip or cling and by the time that they do develop it, they are being kept at a distance from their mothers. The heartbreaking sight of a mother attempting to prise her clinging child away from her (especially when being dropped off at nursery) is all too familiar.

The second striking thing about the photos was the way in which they were accompanied by the unashamed language of maternity. The mother was described as a mum, “contended and cozy”, “cradling her baby”, “protective” and the baby was “clinging” to its mother.

Were anyone to wrench that gorilla baby from its mother, there would be an outcry; Twitter storms, petitions signed, death threats and demands for resignations or sackings. There would be heartrending accounts of how the mother and baby have a desperate need for each other. And yet. Dare to say that a human baby needs its mother in a similar way, or equate female maternal qualities with those of the mother gorilla and you will as likely be named a sexist, misogynist, homophobic bigot who commits the unspeakable crime of idealising motherhood because you secretly want to oppress women, force them to stay at home and stop two men from exercising their ‘right’ to a baby.

The gorillas have definitely got it right.

Share
Facebook
Twitter
WhatsApp
Email
Previous articlePatrick Benham-Crosswell: Western military action in Syria is off the board
Next articleJane Kelly: Arranged marriages hinder integration of Asian minorities in the UK