NewsPaperthe art of publishing
HomeNewsCaroline Farrow: Liberals love devolution until it comes to the DUP
39

Caroline Farrow: Liberals love devolution until it comes to the DUP 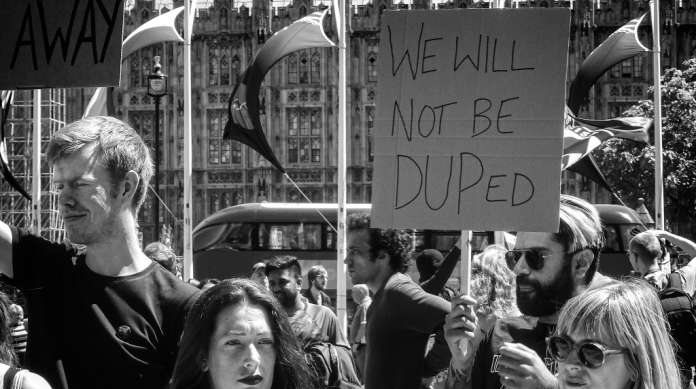 Amazing isn’t it, how in the aftermath of the general election, which has forced Theresa May to make a pact with the DUP, that we have all become instant armchair experts on the intricacies of Northern Ireland politics?

Make no mistake, the howls of outrage coming from the Twitterati, media class and liberal politicians are not based upon any kind of genuine concern about the fate of the peace process. The future of the Northern Irish people is nothing more than a convenient peg for lefties to hang their fury that the Conservatives are still in power and that politicians are still able to hold socially conservative views about gay marriage and abortion without being hounded out of office.

Northern Ireland is still deeply Christian, therefore it’s hardly surprising that they are going to elect politicians who reflect their views. Have the likes of Owen Jones and Patrick Strudwick, to name two liberal Guardian commentators, who were first to hit the keyboards with words of condemnation for these evil homophobes, not considered that in condemning the DUP, they are, by very implication, condemning those who voted for them?

There is a distinct whiff of racism and bigotry coming from the supposedly tolerant liberal quarters, who cannot quite believe that these ten politicians have not only been allowed to continue their careers while at the same time sticking to traditional views about marriage, but who have also been voted into power. It is assumed that the Northern Irish electorate must somehow be ignorant, brainwashed or bigoted, rather than decent people who are voting for those whom they judge to be  the best prospect for Northern Ireland’s future.

It’s not as though the DUP’s manifesto even contains any specific references to homosexuality or gay marriage. They are not mentioned even once. Individual politicians may have expressed intemperate or insensitive views in the past, and most likely the party would oppose any introduction of gay marriage, but that’s an entire world away from wanting to chuck people off buildings by virtue of their sexuality.

Those abhorrent views belong to a form of Islam and their supporters have  links with Jeremy Corbyn. Those screaming about LGBT rights and equality know that there isn’t a cat in hell’s chance of the DUP demanding that the UK repeal gay marriage; the worst thing that could possibly happen is that Theresa May won’t attempt to impose it on Northern Ireland, not that she would have been able to, had she been so minded. It’s a devolved matter.

The same is true of abortion, another issue that has got everyone hot under the collar. There is likely to be no change to abortion legislation in Northern Ireland because being a devolved issue, it’s entirely down to Stormont and reliant on the views of their elected politicians. Though it’s reassuring to see BPAS having a mini Twitter temper-tantrum over the DUP, they know that NI is closed to them as a potential revenue stream for the foreseeable future. When it comes to abortion in the UK, again the DUP are simply not able to impose demands for the criminalisation or restriction of abortion on the UK Parliament. The most they can do is vote on it if and when a private members’ Bill is introduced and the likelihood is, of course, that they will take a pro-life stance. Hence the stamping of feet. The DUP holds the ‘wrong’ opinion.

Indeed, while they may hold a progressive view on so-called ‘marriage equality’, it’s also worth remembering that Labour’s sister party in Northern Ireland, the SDLP, also hold similar pro-life views to the DUP – the party has an explicit pro-life stance, promising not to extend the reforms of the 1967 Abortion Act into Northern Ireland.

The supposed fact that the DUP’s governmental involvement may destabilise the peace process is nothing more than the sickly icing on the cupcake of  lefty-disgust. Up until now, nobody has taken a moment to consider the finer points of Northern Irish politics and what it means to still have their representatives in Parliament. The suspension of Stormont back in March, when the Unionist parties lost their majority and the two sides failed to reach a power-sharing agreement, barely registered in the UK press, and both the Remain and Leave sides evaded the issue during the referendum campaign.

The DUP (who incidentally support Brexit, another reason for lashings of fear, loathing and contempt to be heaped upon them) have been producing perfectly sensible policies for decades. While I wouldn’t count myself among their supporters, many Catholic friends have been saying that they find themselves far more in sympathy with the DUP who represent their interests, hopes and aspirations far better than Sinn Fein, whose aggressive pro-abortion, pro-gay marriage stance holds scant appeal.

Whatever disgust the Labour Party may now express for the DUP, it didn’t stop them from doing deals with the party in 2007 when Gordon Brown was forced to rely on the DUP for forcing through legislation to allow the government to hold terrorists without charge for 42 days. Neither did it stop Labour from repeatedly attempting to do deals with them in 2010 and 2015.

When it comes to the DUP’s supposed links with terrorism, the party has never been the political front of the UVF/UFF, or the ‘prod goon squads’ as they are locally referred to. While the paramilitary group, the UDA, has explicitly supported the DUP, the party has repudiated the UDA’s endorsement and said the following: “If people want to move away from criminality, from terrorism, we will help them to do that, but anyone who is engaged in this sort of activity should stop, should desist, and if they don’t they should be open to the full rigour of the law.”

Not the kind of thing that one would have heard Gerry Adams or Martin McGuiness say while the IRA was mid-campaign. During the Troubles, the DUP was involved with an organisation called the Ulster Resistance. However, this wasn’t a paramilitary organisation but was supported by Ian Paisley and claimed to be ‘militia that would be subject to the police’. Not something that most people would support but their activities were limited to brandishing their shotgun certificates about at night-time rallies held by Paisley in the 1970s. Former first minister Peter Robinson was a member and wore their red beret. However, unlike other politicians, he didn’t actually deny being a member and neither did he claim to be a part of the peace process during his involvement. In any event the DUP cut off all links when some members were caught trying to purchase illegal weapons and it no longer exists.

When it comes to Northern Ireland politics, the brutal truth is that you’re not going to find a single political party who can be said to be whiter than white with no dodgy past associations, though the DUP have done much to clean up its act. The one positive benefit to the frantic Googling of those wanting to appear to be informed is that a renewed focus on Northern Ireland may actually do something to help resolve the current impasse and address the vexing question of Ireland’s borders. When you look at the DUP’s policies, some of them ain’t half bad!

The indignant Left, furiously trying to discredit and smear the DUP, seems to be forgetting two things: first that Theresa May already has a 56-seat majority over Labour and is not automatically beholden to the DUP for every single vote; and second, that if Labour was currently to stand any chance of forming a government, it too would need the support of the DUP, as it has in the past and who knows what the future will bring. Corbyn has cosied up to many more unsavoury characters. Still stupid is as stupid does.