NewsPaperthe art of publishing
HomeNewsCaroline Farrow: Supporters of gay marriage have fought dirty in the Irish...
34

Caroline Farrow: Supporters of gay marriage have fought dirty in the Irish referendum 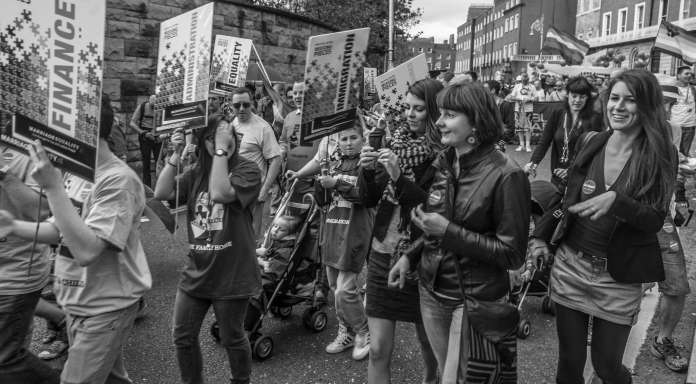 The Republic of Ireland goes to the polls today in a referendum which asks the people whether or not marriage ought to be redefined as being between two people irrespective of their sex. If the majority vote ‘Yes’ then Ireland will become the eighteenth country to legalise same-sex marriage, but the first to have done so by virtue of a referendum.

Whatever the result, the process is at least democratic. Unlike David Cameron, Enda Kenny did at least have the grace to ask the population whether or not they support such a seismic change to society, instead of arbitrarily imposing it upon them in an attempt to boost his party’s progressive credentials.

The culture wars that have crossed the Irish Sea have had a depressingly familiar ring to them. Those in favour of introducing gay marriage may have trotted out winsome soundbites evoking the virtues of love, equality and tolerance but their tactics have been those of the jackboot.

Campaigners on the ‘No’ side have found their families threatened, when Dublin football star Ger Brennan expressed his desire to see a ‘no’ result, his brother found his mobile phone inundated with abusive messages and texts and predictably enough Twitter went into its usual paroxysms of rage. How dare a celebrity dare to say something as outrageous as ‘every child ought to have a mum and dad’?

In another incident, a ten year old girl who was part of a meet and greet session with the campaign group Mothers and Fathers Matter, had to be taken to hospital when she was pelted with eggs by a ‘Yes’ supporter (because of her serious egg allergy) And typical of the smear tactics used by this group, as soon as the keyboard warriors who had been pouncing upon and hounding anyone daring to use the hashtag #marref toexpress the wrong view in an attempt to drive them offline, got wind of the story, they instantly accused the girl’s family of first lying, then exaggerating her allergy and finally blamed her for being there in the first place. As for the person who threw the eggs, well he was just a random yob throwing eggs at members of a campaign group and their children, obviously no-one with any emotional investment in the issue!

Paddy Manning, a gay man has described the repeated death threats and abuse which he has received due to his involvement in the ‘No’ campaign. His presence is an uncomfortable reminder that not every gay person automatically supports this issue, Judge Brownlie, who recently ruled against the Ashers baking company, ought to take note, her ruling stated that ‘support for same sex marriage is indissociable from sexual orientation’.

Manning states that along with many gay people, he has no problem with his relationships being recognised in a different way by the State, using the device of civil partnerships, because, as he says, his union is fundamentally different. That isn’t to say that he isn’t capable of loving in the same intensity or to the same degree as a heterosexual but that his relationships are fundamentally different in nature because of their inability to procreate, which is the only reason that the government ever had any interest in marriage in the first place.

The State should have absolutely no business regulating private relationships between individuals and neither should anyone wish to grant them this power. What gay men and women ought to be pushing for, he says, is for the Irish Constitution to adopt civil partnerships as opposed to redefining marriage and that the ‘Yes’ campaigners do not speak for him. Indeed he bristles at the notion that somehow his relationships have to have the option of marriage in order for him to be seen as equal. Where’s the diversity? he asks. One has to wonder whether or not this desire for same-sex marriage is borne of a latent homophobia, especially given that it seems to be being pushed by so many who are themselves straight. Why do we need to normalise difference.?

The most ironic accusation levelled at Manning and Keith Mills, another gay man involved with Mothers and Fathers Matter, is that somehow they are ‘self-hating’. Let’s not forget where that comes from. It was an idea back in the thirties that being gay was quite so disgusting that gay men and women hated themselves, something of an own goal.

Paddy and Keith are both middle-aged and unlike today’s youth remember when homophobia was a terrifying reality in Ireland; as a young man Paddy was the last man to be arrested under Ireland’s laws criminalising homosexual acts, having been set up by the Gardai in a car park. That was an Ireland a long, long time ago in a galaxy far, far away he laughs, literally another country. Ireland has moved on a long way since then and passing a law to redefine marriage cannot change the past.

Ideally the referendum should have promoted a free and open debate and certainly the ‘No’ campaign has been extremely successful in really getting across the message that to redefine marriage, jeopardises the rights of children, in a way that perhaps we didn’t manage in the UK,.But then again we were never afforded the ability to influence the outcome, rather than attempting to persuade MPs subject to the party whip and the influence of lobby groups, to use their conscience and think about the wider implications for the family unit and society.

Irish LGBT groups have desperately been attempting to persuade the electorate that this is simply about adults and has nothing to do with children or surrogacy, but interventions such as the publicity hungry Drewitt-Barlowcouple, owners of the British Surrogacy Agency, pledging a million euros to the Yes side have made these claims seem hollow.

And while we’re on the subject of money, the Yes side has been at a considerable advantage, with their campaign funded by the American lobby group Atlantic Philanthropies, which has spent literally hundreds of thousands of dollars pursuing LGBT rights in Ireland. If the campaign is successful, it will be as a result as a result of foreign investment directly attempting to interfere in Irish policy along with a media bias; Irish print media published 3 times as many articles devoted to the Yes cause as those promoting the No side, according to a media watchdog. Unbelievably, the leadership of the Irish Garda have got involved, calling for Gardai to back the measure, calling into question as to whether or not they may be relied upon as impartial defenders of the law. Given the Gardai are heavily involved in supervising today’s process, that their leader has pointed out that they have a duty to vote Yes, this is an extremely problematic intervention.

The plain fact of the matter is that at the heart of gay marriage is an attempt to sever the link between families and children and make the institution solely about love. If the measure is passed, this will have legal ramifications upon children, given that article 41 of the Irish Constitution recognises that concepts of family are based upon marriage. As has happened in the UK, this will impact upon adoption and surrogacy laws, no longer will achild’s biological parents be automatically deemed their birthright.

As the cases of Ashers bakery and an Irish stationary store have demonstrated, the phrase ‘don’t like gay marriage, don’t have one’ has morphed into ‘don’t like gay marriage, then watch out as we do whatever we can to drive you out of business, if you dare to express this’. Colm O’Gorman, director of Amnesty International in Ireland, is another vigorous public supporter of this measure and yet his organisation, which was set up precisely to support those unable to express their political or religious conscience without fear of punishment, does not seem to care one iota about the conscience rights of  schools, marriage advisory organisations and businesses forced to either abandon their religious ethics or face closure.

What is so depressing and terrifying watching all of this unfold, is how the once universally accepted truth that every child deserves to be brought up by a loving mother and father is now become an outrageous statement, deemed to be so full of hatred that those who utter it must be hounded, smeared and shut down.

The No campaigners have resolutely stuck to the issue of parents and stayed well away from personal attack, whereas those on the Yes side have used every trick in the book in an attempt to demonise and call into question the character and intentions of those who are seeking to deny them their ‘rights’, a right that is not even acknowledged as existing by even the European Court of Human Rights.

The only people really set to benefit from this measure should it pass, are the politicians who following the collapse of established morality, are seeking some benchmark by which they can be measured as ‘morally good’ or ‘nice’. This isn’t about love, it isn’t about rights, equality has never entailed treating two different things in exactly the same way. It’s about undermining and weakening the age-old definition of the family, in order tojustify further state intervention into peoples’ lives under the guise of compassion. It’s about putting the desires of adults to conform to a model of family, biologically impossible in ages past, above the rights of children to have a mum and a dad in a way which is most likely to impact upon women, who are the ones servicing the desire to provide eggs and wombs in order to achieve equality.

Pollsters have reported sections of the Irish electorate too reluctant to admit to opposing the measure and who have begged campaigners not to let others know about their families’ voting intentions, because they are so afraid of intimidation. Only yesterday leading No campaigners declined an invitation to take part in the results show, because where were Ireland’s liberal broadcasters hosting the event – in the biggest gay bar in the Dublin!

It’s been a dirty and unedifying and unequal fight, the No campaigners have simply not been able to match their opponents in terms of money or influence in the media and the result is almost inevitable. One can only hope that the phenomenon of shy voters is not confined to the UK political sphere.

Share
Facebook
Twitter
WhatsApp
Email
Previous articleKathy Gyngell: Steve Hilton is right. We do have a problem with big business. We haven’t got any
Next articleReader’s Comment of the Day: EU referendum is an establishment stitch-up