NewsPaperthe art of publishing
HomeNewsCerberus: Are Labour voters going to do for Cameron?
30

Cerberus: Are Labour voters going to do for Cameron? 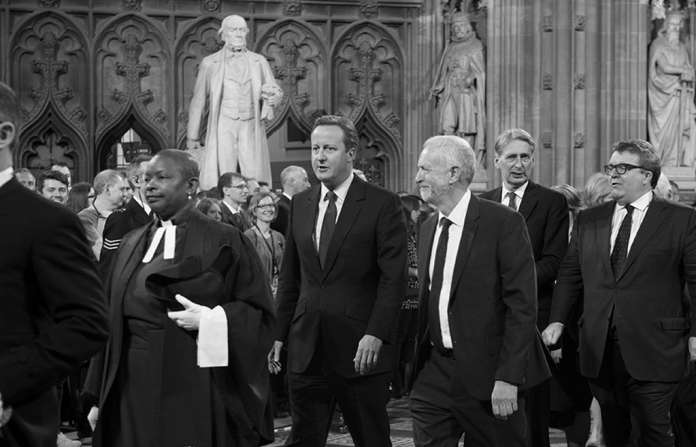 Shadow Home Secretary Andy Burnham put it as well as anybody: “We have definitely been far too much Hampstead and not enough Hull in recent times.” Indeed. Labour’s campaign to Remain in the EU has been half-hearted and contemptuous of the concerns of its core vote. This failure explains why there is now a mounting sense of panic in Downing Street. With working class voters in Labour’s northern heartlands opting for Leave, the unthinkable has become a real possibility. Britain could well vote to quit the EU on June 23.

The evidence is all around us. Take the ORB poll for The Independent on Saturday. Adjusting for turnout, that gave Leave an unprecedented 10-point lead. It also showed that among Labour supporters, Remain leads by only 56 to 44, suggesting an alarming slump in its support among this key group. (Among Tory voters the figures are Remain 38 to Leave 62, confirming that Cameron has badly misjudged the mood in his ranks.) Given that 30 per cent of the country voted Labour at the last election, Remain needs to take about two thirds of this group and over half the 37 per cent who voted Conservative to be confident of victory. A collapse in Labour backing for Remain spells doom for Cameron.

Anecdotally, it seems even worse. Take seasoned writer Robert Hardman in the Daily Mail on Saturday, reporting on his canvassing of working class areas in Leeds and Stockport. “I am not merely surprised by the level of antipathy for the EU here. I am astonished.”

The Sunday Times reported a crisis meeting in Britain Stronger in Europe after internal polling showed that support for Remain among Labour voters had “fallen off a cliff”. According to The Sunday Telegraph, in some seats support for Leave is running at 70 per cent. As one Labour Remain insider put it: “The feedback from canvassing is awful. The Labour vote is dreadful, just dreadful.” A senior Labour MP from the north said that voters on his patch were “overwhelmingly against” remaining in the EU because Labour had dismissed the concerns of its traditional voters about immigration. Tory MPs campaigning for Leave say they are staggered by the reception they are getting on the streets.

In The Mail on Sunday, Leave supporter Kate Hoey, a leading Labour MP, lambasted her party’s leadership for ignoring the legitimate concerns of its rank and file supporters over immigration. MPs of all parties are finding stunning levels of support for Leave right across the country – even in London where ORB confounded the conventional wisdom by finding that Leave was leading 56 to 44 – in line with the national picture. Not surprisingly, the bookmakers have slashed the odds on Brexit to 2/1 – which still looks a good bet, though it is a far shorter price than a few weeks ago.

It is beginning to dawn on the Remain camp – and its Downing Street nerve centre particularly – that they cannot win this fight with Tory votes alone. In fact, with Conservative support for Remain also on the slide – thanks to the efforts of Boris Johnson, Michael Gove and Iain Duncan Smith in particular, No 10 needs Labour voters more than ever. A meltdown in backing for the EU in Labour heartlands means curtains for Cameron and Co.

How to stop the rot? First it doesn’t help that the media – print and broadcast alike – prefer the psychodrama of blue-on-blue back-stabbing (eg last week’s ITV debate featuring Amber Rudd’s venomous attack on Boris) to tedious analysis of the issues or reporting of the occasional and predictable speeches trotted out by Labour’s leading lights. No wonder that 40 per cent of Labour voters don’t know that their party is backing Remain.

Then there is the comatose Jeremy Corbyn, last seen on Channel 4’s satirical chat show The Last Leg in a fake fur coat stepping out of a Bentley. He doesn’t seem to be taking the threat of Brexit at all seriously and even when he deigns to make a speech about the subject cannot help himself sounding as if he backs Leave (which, of course, he privately does). But then will Corbyn and his gang really be distressed by a Leave vote plunging Cameron and his government into a spectacular crisis ultimately costing him his job? One doubts it.

No 10 is said to be planning to move Cameron out of the spotlight in the hope that Corbyn and his senior allies can make a renewed pitch for Labour voters to back Remain. It has dawned on the Tory high command that core Labour supporters are not terribly impressed by dire warnings issued by an upper-crust Conservative Prime Minister.

A few weeks ago Brexit seemed a pipedream. On the streets of our northern towns and cities, it doesn’t seem like that any more.