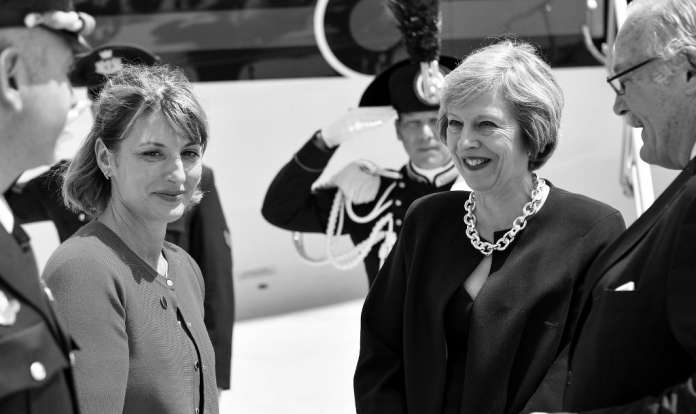 Theresa May resembles a medieval monarch surveying the battlefield after her various and many enemies have been put to the sword. The bodies pile up in all directions. To the left lie the remnants of the Labour Party, scattered around the bloodied corpse of its leader Corbyn. His tattered red standard is half buried in the mud. To the right and the left, Ukip’s few survivors are struggling away from the field. In the distance, a few yellow banners, caught on the branches of trees, flutter in the breeze. But Corporal Farron has fled and his dwindling band of Lib Dem supporters are dead or dying.

Mistress of all she surveys?

So it seems after the carnage of Copeland and Stoke. Under Corbyn, Labour has no chance of forming a government in the 2020 election. It would be a miracle if the party was able to hold onto anything like its current 230 MPs. In fact, it would be a miracle (actually a cross between nightmare and farce) if Corbyn leads his party into the next election. As one union official told FT Weekend: “I think he will be gone in a year. You sit down with him and really, it’s just useless. He’s like your grandad;  he’s got no ideas no energy, no charisma, nothing.”

Or, as a so-called ally put it when asked if Corbyn saw himself as a potential Prime Minister: “I think he would rather be growing tomatoes.”

For all that, the slow motion train wreck of the Labour Party still has some way to go. Its leader is utterly useless, hasn’t had a new idea since 1977 and is plainly exhausted and increasingly tetchy. Unconfirmed reports suggest he takes every Monday off if he does TV interviews on a Sunday! But Labour’s problems go deeper than the threadbare incompetence of its leader. For starters, there is no one with the personality, energy and ideas to take his place and make a better fist of the job. The Blairites lack a standard bearer of any credibility – and in any case are scattered to the winds. On Brexit, the burning issue of the moment, they are hopelessly at odds with the mood of the people. They can plot and scheme all they like but Britain is leaving the European Union and growing numbers of people (either Leave or Remain) just want the Government to finish the job.

As for Ukip, Queen Theresa has shot its fox. As she knows only too well, so long as she delivers on Brexit means Brexit, she has little to fear from a purple backlash. Farage first and Nuttall now are right in believing that Ukip’s best hope is to replace the bombed out Labour Party as the home of the patriotic working class voter of the Midlands and North. But that is a long-term project that will take patience, time, money, organisation and policy development – qualities in desperately short supply in the party. Farage’s brilliance and his relentless pursuit of a very big idea masked the fact that behind the fireworks of his oratory and campaigning lay little in terms of substance and an extraordinary dearth of people of talent.

The Lib Dems have always been an exercise in incoherence and contradiction, leaning left in Labour areas and right in Tory ones. They can make some headway in the good times (singularly not in today’s post crash Britain) but with nine MPs they are back to where they were in the 1970s – irrelevant.

So what of our undisputed monarch? On these pages yesterday, Daniel Johnson, editor of Standpoint, urged Queen Theresa to be bold. But that is not in her nature. She is cautious, not bold. Conventional not radical. It is hard to think of a single reckless thing this 60-year-old vicar’s daughter has done in her life. She never made a fuss about mass immigration (until the conference speech after the 2015 election), she proved an invisible supporter of Remain but happily embraced Brexit when the deed was done, and she was a generally low profile incumbent at the Home Office for six years.

True, she did denounce her own ranks as the “nasty party” in 2002, but that was really a positioning exercise in the Mods v Rockers gang warfare that disfigured the Hague and Duncan Smith leadership eras around the turn of the millennium.

No, our Queen looks before she leaps. She has looked and worked out that if she doe not deliver full fat Brexit, the ravenous anti-Europeans in her party will eat her for breakfast, egged on by the millions who voted that way back in June. She is toying with a revival of grammar schools (quite bold) but it remains to be seen if that turns out to be more than a tokenistic exercise in which selective places are awarded as much on grounds of social deprivation as on academic merit.

Her Chancellor, the equally sober Mr Hammond, delivers his Budget in a little over a week. Beyond spraying a few billions around buying off the Daily Mail and Tory backbenchers over business rates and social care costs, he is not expected to embrace the kind of tax and regulatory changes that would break with the EU’s failed social democratic model and spur the country towards its bright new (if slightly scary) post-Brexit future.

Queen Theresa is not Attila the Hen. Unlike Mrs Thatcher, she can pass by a cosy cartel, restrictive practice or shoddy public service without whacking it with her handbag. Our first female Prime Minister wanted to change the world and certainly left a few dents. Theresa the First has more modest ambitions.

But these are early days. Perhaps, as she gets on top of Brexit and persuades the Europeans and their Remain fifth columnists that she is serious about a divorce, her confidence will grow and she will realise that with her enemies in disarray she can spend a decade making Britain great again.