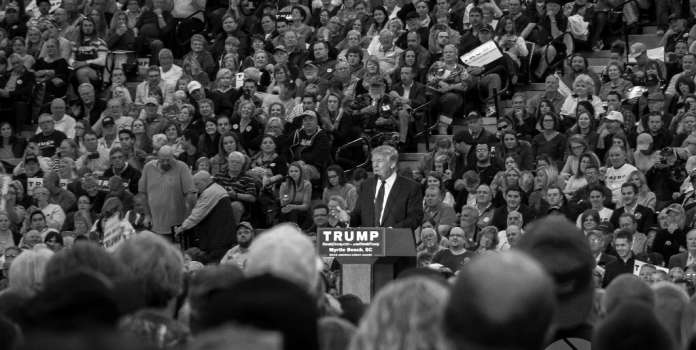 So lightning did strike twice. On June 23, the British people rose up against their political elite and decisively broke with the foreign and domestic policy consensus of the last 50 years by voting to leave the European Union. And yesterday, the American people decisively broke with a Washington political elite that they believe has impoverished them and treated them with contempt. They elected a 70-year-old maverick businessman Donald Trump as their 45th President in the biggest political upset of modern times.

Trump promised “Brexit plus, plus, plus” but few believed him. After all, the polls pointed overwhelmingly to a victory for Hillary Clinton, with Reuters giving her a 95 per cent chance of success and Huffington Post 98 per cent. But just as in Britain, the white working class , whose average wages have fallen over the past 20 years, turned out in their droves to reject the Establishment’s poster girl Hillary and send their ferociously non-PC champion to the White House.

Economics drove the Trump revolution. Globalisation (and its hand-maiden immigration) has driven down incomes for ordinary Americans, just as it has compressed household incomes in this country for those not lucky enough to land a plum job with a big bank, fat cat quango or public sector featherbed. But culture was at work too. Trump has broken every rule in the PC playbook. He has insulted women, Mexicans, minorities in general and Muslims. He has promised to build a “big beautiful wall” to keep would-be illegal Mexican immigrants in their place and threatened a temporary ban on Muslims entering the country in the wake of terrorist atrocities. He has sent the Twittersphere into orbit on a daily basis and, alarmingly from a European perspective, he has cast doubt on the future of Nato. He has cheerfully branded his rival, the former Secretary of State, a “crook” while his supporters demanded that he “lock her up”.

Yet none of this mattered a jot as he swept through the rust-belt states with white, blue collar males in the vanguard of a furious popular uprising. Such breaches of liberal-approved public discourse should have disqualified him from any chance of gaining the Republican nomination, let alone challenging for the presidency. Yet he did win the nomination – comfortably in the end. This in itself should have given the liberal commentariat pause for thought, but they only redoubled their scorn for the challenger, stoking the mainstream media’s collective contempt for a man they believed had destroyed his chances of victory.

One of the problems for British people in comprehending this American power struggle is that almost all reporting of it is filtered through the mainstream media, particularly the BBC. Armies of achingly politically correct BBC presenters, reporters, producers and editors have traipsed around the United States for months on end, all coming to the same conclusion – that Trump is a vulgar, coarse, ignorant braggart who has alienated so many of their favourite interest groups that he could never stand a chance of beating Hillary – bolstered as she was by the saintly Obama and his perfect wife and legions of Hollywood, showbiz and music stars. Trump, meanwhile, was a man alone, cold shouldered by the Republican establishment. Heck . George W Bush and his wife let it be known on polling day that they had not voted for Trump. How could he win when the last Republican president placed his cross elsewhere?

Of course, it does not help that the BBC, in its relentless pursuit of identity politics and the great god diversity, is now a zone free of any stripe of conservative. It will go on getting the big stories wrong until it terminates its devotion to its own form of political and cultural apartheid.

But Trump did win. All the earnest analysis of the voting intentions of America’s many minorities – African-Americans, Hispanics, women (of course, they are not a minority but they are treated as one), college-educated women – missed the critical point. What about the majority? Even today, over 60 per cent of Americans are white. The majority, fed up with being patronised, insulted, made to feel small, ignored, ridiculed as rednecks – and impoverished – took their chance to hit back. At last, they had a candidate (forget the fact that he is a billionaire businessman with a private jet) who “felt their pain”.

Not so much a backlash as a “whitelash”.

UK liberals, with the BBC to the fore, will be appalled. Already, on Today, we have had journalist Anne Applebaum, head in hands, opining that Trump’s victory is the death of the West, with free trade at an end and Nato finished. But liberals should be asking themselves a different question. Why did we not see this coming? How did it happen? How was it that we got the Brexit vote so spectacularly wrong and now we have written off the man who is about to become the most powerful on the planet? Shades here of how Ronald Reagan, now widely regarded as the greatest of post-War presidents, was similarly derided by the UK liberal establishment nearly 40 years ago.

Someone who did not get it wrong is Nigel Farage, the still largely unsung hero of Brexit. Last night, he was telling people to forget the polls and focus on the turnout. If like the referendum, millions of people who had not voted for years were motivated to go to the polls then a spectacular upset was on the cards. And Farage, who helped Trump prepare for his TV debates with Hillary, is just about the only UK politician on first name terms with The Donald. Theresa May, it should be noted, has also played her cards carefully, unlike Cameron refraining from public criticism of the man who is now heading for the White House.

Besides the post-mortem – which should be stringent at the level of our national broadcaster – attention will turn to what Donald does next. He is at heart a practical businessman who does deals and gets things done. And, after the cordite of the battlefield, he had the wit and wisdom today in accepting his victory to strike a conciliatory note at home and abroad.