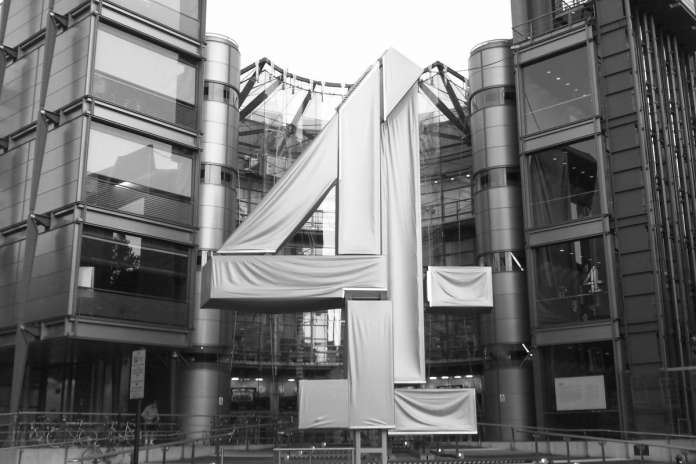 The pollsters Survation were commissioned by the UK’s Number One propaganda network, Channel 4, to conduct a survey the findings of which are purported to show that a majority of voters in the UK would now support remaining within the EU.

I have been unable to find a single news outlet that has not simply run with the C4 press release, and this goes for broadly Leave-supporting sources as well as Remain ones who are obviously cock-a-hoop with the thought that groundswell opinion has shifted in their preferred direction.

The information on the Survation site is all one needs to realise that the poll is no more than horse feathers.

The first shortcoming in the write-up is that there is no reference to how the 20,000 respondents were interviewed (although the C4 site says it was online), how much time on average was devoted by each individual to his or her survey response and what percentage of those approached declined to participate at all.

Next, how complex are the questions in the survey and how nuanced? If the questions explore possibilities which sound similar, more time is needed for the respondent to be able to differentiate properly between the various options being put up for consideration. If the process is rushed, confusion and inconsistency occur.

The imprecise nature of the online polling suggests a possible large degree of self-selection on the part of respondents, and this is another serious flaw in a supposedly impartial survey. The very fact of the polling being conducted online creates a bias against participants who have no internet access. If, as we are told, this group would likely be older people and if, as we are also told, older voters were more prone to vote Leave, there is a built-in bias in favour of Remain.

Given these serious caveats, here are the questions and the proportion of respondents who opted for each of the proposed options: 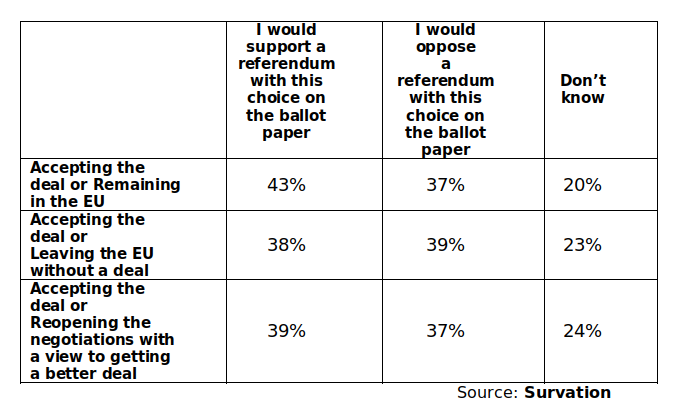 There are four scenarios on offer here, three of which are problematic because they are hypothetical verging on idiotic.

The problem here is that the nature of the deal is unknown. Respondents may have a notion of what an eventual deal might look like but it is bound to be subjective. You might think that any deal that May manages to clinch is bound to be a stinker or you might think that any deal concluded by Barnier and Varadkar is fabulous. This option is common to all three referendum questions so to that degree the entire exercise is a nonsense.

Remaining in the EU

There is no mechanism for rescinding the UK’s Article 50 Letter so here too the option is based on a false premise. In all likelihood some method could be found to bend the rules and create a mechanism that would have the effect of cancelling Article 50 but the Commission has already made clear that the British rebate (the half that remains of it after Tony Blair surrendered 50 per cent of what Margaret Thatcher extracted from the EU) has gone for ever. So this option is not a clear option and would not simply wind the clock back to the status quo ante.

Leaving the EU without a deal

This is the only option, good or bad, which makes any practical sense for the reason that it is the only option of those advanced by Survation that is currently available even if its wider ramifications are unknown.

Reopening the negotiations with a view to getting a better deal

This is the pinnacle of silliness. Two years of procrastination and double-dealing might result in an unsatisfactory deal and yet voters would be asking May to carry on negotiating with the EU in the far-from-certain expectation that a later deal would be better than the one she might sign up to now.

The results are of necessity going to be muddied by having an either/or question and where one of the two possibilities concerns something –a ‘deal’ – that is an entirely unknown quantity. A considered response would arguably oppose any and all of the three referendum configurations on offer because of this ambiguity.

The proportion of respondents who in each case opted for ‘don’t know’ may indicate that those answers came from people flummoxed by an array of nonsensical and unrealistic options. They may, of course, have simply been confused or bored by the questioning but it is significant that roughly half of the number who supported or opposed any of the options declined to make a choice between them.

The second table on the Survation site splits respondents as between Leave and Remain voters in 2016. Rather than reproduce their table here in full, it is more interesting to highlight the only two options to score more than 50 per cent.

This is something less than an astonishing result and it illustrates perfectly the pointlessness of including ‘accepting the deal’ in the questions. Respondents who voted Remain predominantly still wish to remain and similarly those who voted Leave still want to leave.

The Channel 4 site claims that 54 per cent of people said they would stay in the EU if the referendum were held tomorrow when those who refused to vote or answered ‘don’t know’ were removed. This tells us something that the Survation site fails to, namely that there were respondents who refused to participate, but we still don’t know what proportion of the total sample declined to take part. The greater this number, the shakier the conclusion.

By sweeping away the ‘don’t knows’ and the non-participants, one arrives at the numbers in the right hand column. There is now a clear 5 per cent lead for Remain but the questions deserve a fresh look: 54 per cent support accepting a deal or remaining in the EU. If the deal ends up like Chequers or Chequers minus minus, then this amounts to a Brexit-in-name-only which Remainers would find comfortable. Forty-nine per cent is the figure for those approving that weird hybrid, Brexit or Brexit-in-name-only, so the lower score is not that surprising.

It would be interesting if Survation could go back to its pool of 20,000 respondents to ask them what they felt the UK should expect from the EU in return for a payment of £39billion. Would this be a ‘deal’ or ‘reopening negotiations with a view to getting a better deal’ or would it be better to expect something tangible and quantifiable worth £39billion?

When Blair relinquished 50 per cent of the UK’s rebate, this was as a quid pro quo for reform of the Common Agricultural Policy. That reform never took place and it would be a sorry state of affairs for the UK to be gulled or gammoned into making the same costly mistake again.