NewsPaperthe art of publishing
HomeNewsChild exploitation, the dark side of relaxing our rules on refugees
46

Child exploitation, the dark side of relaxing our rules on refugees 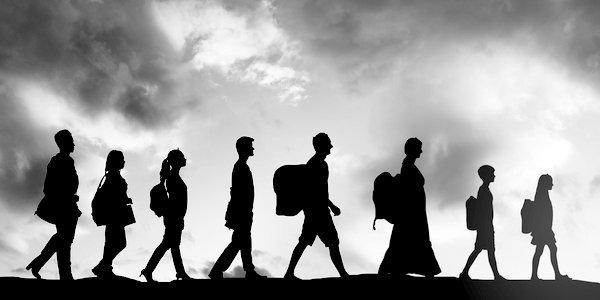 ANOTHER day, another ‘Crowd Justice Appeal.’ Today’s is from Refugee Legal Support (RLS), a charity working to ‘reunify refugees with family members in the UK.’

RLS is looking for donations to provide ‘urgent legal support’ to help unaccompanied refugee children gain entry to the UK. Its website tells us that the team was set up in 2017, and operates in Athens, Lesvos – the Greek island off the Turkish coast – and London.

RLS provides pen portraits to illustrate the plight of those needing help: ‘Shadi,’ a 17-year-old unaccompanied boy from Syria, who, though accepted for transfer to the UK in September of last year, is still waiting. He turns 18 soon and is worried that if he doesn’t get entry now he may be prevented from joining his sister under post-Brexit rules.

Now I hope you don’t think me uncharitable to point out that we can know truly little about Shadi or his sister, or indeed much about the motives of RLS. What we do know is that our nation’s asylum processes are under stress and entry should not depend on the activity of charities, however laudable their intentions.

It is the responsibility of the Home Office to ‘resettle’ unaccompanied asylum-seeking children and only after they have carried out all lawful checks and implemented rigorous procedures for follow-up, especially for those on the cusp of adulthood.

Asylum-seeking children go on to be the responsibility of local social services departments, who are legally obliged to house and feed them. But there is not always the budget for continuing ‘specialist support,’ and disturbing numbers of them ‘disappear,’ sometimes trafficked into criminal hands.

The case of ‘A.N and V.C.L versus the UK’ was hailed a ‘landmark decision’ in the fight against trafficking. The ruling has consequences for how the Home Office, law enforcement, and the Crown Prosecution Service deal with young asylum seekers.

This is of critical importance given the ongoing disruption on our borders and the increasing scale of both asylum-seeking and trafficking.

There are an estimated 21million people in forced labour globally, more than 25 per cent of them children. Exploited men, women, and children from over 90 countries have been identified in the UK alone. The trade is highly organised, lucrative, and transnational.

Previous recommendations that the UK establish an independent National Rapporteur on Trafficking and Exploitation, with specific focus on children (pdf), have not been implemented. The result is a problem that falls between disparate agencies and a lack of quality data.

The proposal was for a unit to collect, monitor, and analyse comprehensive and disaggregated data to establish how and where young people are being trafficked from.

The Home Office seems to have given up on preventing trafficking in the first place and has poor systems for dealing with it quickly once it comes to light. Brothels and agricultural workers, especially, appear to be operate with impunity and in plain sight of the authorities.

Meanwhile, the Government trumpets its performance as a ‘world leader in global resettlement,’ especially its Vulnerable-Persons-Resettlement-Scheme (VPRS), set up in the wake of the crisis in Syria.

The scheme has brought in more than 18,000 people since 2014. Over half of them were under 18, which, it says, demonstrates ‘our commitment to giving vulnerable children the chance to rebuild their lives in safety’. One wonders how many of them have been caught in the maw of criminality, prostitution or slavery.

Unaccompanied children reach Europe by many routes, often with parents funding their passage in the ‘hope of a better life’. Not all of them can be classified as ‘seeking asylum’.

Underage asylum seekers are understood to be vulnerable. The Citizenship and Immigration Act 2009, Section 55, puts a mandatory duty on the Home Office and others to safeguard and promote the welfare of children as they carry out their immigration functions.

The scope of the duty is broad, meaning that all government processes should take it into account. All UK asylum and immigration policies and practices must comply with the duty to treat a child’s best interests as a primary consideration (pdf). Legal Aid is available in almost all cases.

The duty applies to how claims are considered and decisions made.  Authorities must always consider a child’s ‘best interests’ when conducting interviews, providing accommodation, and assessing evidence.

In practice, this means that the process for claiming asylum as a child is slightly different to that for adults. Children must be interviewed only by specially-trained staff, and those under the age of 12, or older children who lack capacity (however that is determined), may not be interviewed at all.

Children’s asylum claims should be decided more quickly than the average, within six months – though in practice this target is not always met.

The UK Border Agency (UKBA) can challenge the assertion that an asylum seeker is a child (under 18).  The agency has a reputation for disputing the age of child applicants as its default position. In the absence of original documents, often deliberately destroyed, children are ‘aged’ by referral to specialist  teams who offer an ‘independent decision’(pdf).

A range of physiological tests, including dental investigation and bone density scanning are used, although critics complain they constitute a breach of human rights. The tests can be inaccurate, with a range of two years either side. The final determination of age can be appealed to the High Court.

A UKBA official will then decide whether to recognise the child as a refugee, or dismiss their claim. Even if the asylum claim is refused, a child will usually be granted discretionary leave to remain for 30 months or until they are 17 and a half years old, whichever comes sooner.

The child can then apply to extend their stay, a decision which will be considered by a separate UKBA official – that is, if they have not already ‘disappeared’.

The Home Office agrees with the statement of the UNHCR that there is ‘no such thing as a bogus asylum seeker or an illegal asylum seeker. As an asylum seeker, a person has entered a legal process of refugee status determination. Everybody has a right to seek asylum in another country’.

Child trafficking under the guise of asylum seeking is a growing problem: It feeds the sex industry and criminality of all sorts, including drugs manufacture and distribution.

Some people rescued from exploitation have been identified as previous unaccompanied minors. Front line safeguarding staff say they do not have the appropriate training or support needed to work with such children, and all agencies are resource-stretched and underfunded.

Last year the Home Office launched yet another new scheme to ‘help 20,000 … fleeing global conflict and persecution’. The intention was, before Covid, to resettle 5,000 of the world’s most vulnerable refugees in the first year of the scheme, half of them children.

This new programme will, it says, ‘broaden the geographical focus (of support) beyond the Middle East and North Africa, making sure we can provide protection to those most in need from across the globe’.

Such statements from the Home Office, in a country beaten down by coronavirus measures and lockdowns, with already stretched Border Security, and inadequate child safeguarding measures, are an open invitation to abuse.