NewsPaperthe art of publishing
HomeNewsChris McGovern: Greening caves into the ‘Blob’ yet again
2

Chris McGovern: Greening caves into the ‘Blob’ yet again 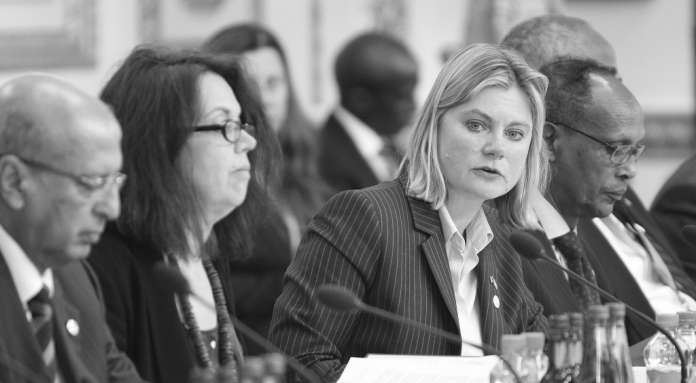 Would you believe it? Two ‘Munich 1938’ moments in a week for the Education Secretary, Justine Greening. Not even Neville Chamberlain could match that feat! First of all, we had her climb down on GCSE, with the ‘pass’ rate lowered by a grade. Now, we have her proposal further to appease the educational establishment, the ‘Blob’, by giving into its demand to scrap SATs tests for seven-year-olds.

Rather than simplifying and improving these particular SATs tests, Justine has simply caved in to those who wish to conceal rather than to reveal how well or how badly our children are performing. She seems to have lost sight of the fact that the seven-year-olds who benefit most from SATs are those who ‘fail’ them. This is because, at least, it allows children who are falling behind at an early age to be identified and, as a consequence, they should be given the necessary support to improve. By the age of 11 it is, already, too late.

Pupils entering secondary school lacking competence in basic literacy and numeracy tend to fall further behind, to become disengaged and disenchanted and, not infrequently, to disrupt the education of other children. They are, effectively, condemned from a young age to walk that educational ‘green mile’ to no worthwhile qualifications, unemployability and hopelessness: ready fodder for political extremism of all shades.  According to employers around 20 per cent of school leavers already fall into this category.

Arguably, some primary schools have long given up on the ‘underclass’ of poor performers. Even when they can identify them, the child-centered teaching methodology they have to employ does not improve matters. Greening’s plan to ditch the SATs diagnosis lifeline for these children is little short of reckless and despicable. Relying on teacher assessment alone has never worked. A decade from now we shall see the consequences of her decision. By that time she will have long moved on from the DfE and few of the unemployable school leavers will link their plight to a long forgotten Education Secretary.

The media have been awash with stories about most teachers and some parents bemoaning the stress caused to pupils by SATs. They seem to forget that testing is a regular occurrence – weekly or, even, daily – in some of the best education systems around the world and is, indeed, common in many of our top independent schools.

And what about the children? What do they think about SATs? Given the negative messages with which they are bombarded, and that they are the ones who actually take the SATs, one would have thought that they would be, more or less, wholly against the tests. Not so, it turns out. At the time of last year’s SATs a poll of pupils for children’s BBC (CBBC) Newsround showed that around half of pupils said that they did “not mind” taking SATs and almost as many said that they “enjoyed” taking them as said that the tests made them feel “sad or moody”.

I suspect that there would be even more support for SATs if children could hear the case in support of them. Recently, I was invited by CBBC to a televised debate in front of primary school pupils in inner London on the issue of homework in primary school. I am in favour and I was up against a teacher union national official who, in line with her union, was against. Before the debate began all the pupils I spoke to told me that they were against homework. Even my articulate union opponent more or less told me that I did not have much hope of winning my case. The vote at the end seemed to dumbfound the BBC. I won by 80 per cent to 20 per cent. It seems that children are quite capable of making up their own minds when they have the chance to hear both sides of an argument. It was a pity that the BBC did not report the final result even though they showed extracts from the debate.

It is, also, a pity that the Education Secretary does not appear to go much beyond the Blob before hoisting her white flag of surrender over education policy. She might better advised to allow children to hear both sides of the argument and, then listen to them.

Share
Facebook
Twitter
WhatsApp
Email
Previous article‘Rebel Priest’ Rev Jules Gomes: Catholics are wrong to cite the Bible as opposing the death penalty
Next articleCerberus: When it comes to the money, we have the EU over a barrel