NewsPaperthe art of publishing
HomeNewsChris McGovern: India can teach us a lesson in raising school standards
15

Chris McGovern: India can teach us a lesson in raising school standards 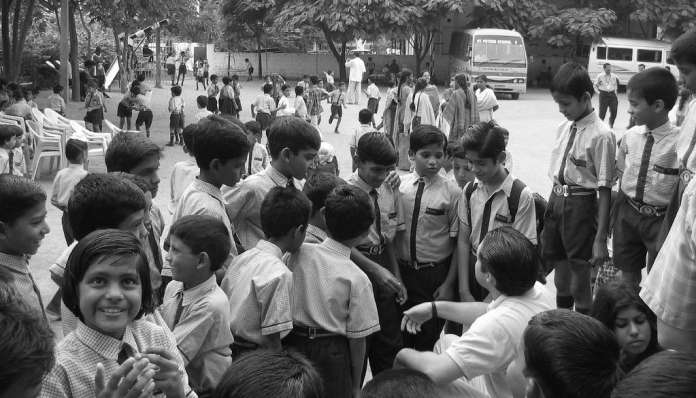 Another 1.2 billion of the world’s population seem to have got it all wrong when it comes to schooling. I visited a state primary school in rural India a few hours before writing this blog. And, would you believe it, the children were sitting in rows facing a blackboard and the teachers were teaching the little blighters in a didactic way from the front of class. Just how old-fashioned can you get? I mean to say, we Brits dropped this methodology and replaced it with child-centred group work years ago. How extraordinary that, on the sub-continent, they are still using the teaching methods we left them with in 1947 when we gave India its independence.

Extraordinary, too, to see the national flag, the national anthem, the national song and the national ‘pledge’ painted on the playground wall. Children simply cannot escape their national identity, and to reinforce it I noticed pictures of Indian heroes and heroines plastering the classroom walls alongside photographs of the armed forces – an aircraft carrier, planes, helicopters, armed soldiers etc.

Such pride in nationhood, identity and military power would not be tolerated in British classrooms. Our educators see their role as promoting only the equality of different cultures and different peoples, with the exception of the British culture and identity, of course, which is too often taught as being inherently inferior.

Even worse, from a British educator’s perspective, I could not help noticing a large mural of Noddy painted on one playground wall. Can you imagine sexist, racist, homophobic Noddy or any Enid Blyton characters being lauded in one of our schools?

Nor, it seems are Indian state schools afraid to display and promote religious imagery.

Saraswati, the Hindu goddess of education – knowledge, music and the creative arts – is on prominent display. The teachers were proud and grateful to have divine support for their work – which was clearly a vocation. No one seemed to give a fig that the promotion of a Hindu goddess might be seen as a form of religious discrimination. Very un-British!

And what about the learning that was taking place? It was impressive to be greeted in simple words of the English language by 5-year-olds whose own language, Hindi, is so different from ours. Not only were these rural primary school pupils learning a second language from age 4, by the time they reached junior school age they we keen to demonstrate their awareness of western customs such as a handshake – so different from their traditional Hindi joined hand, non-contact, custom.

These youngsters were amongst the poorest in India but the level of work I saw in mathematics was at the level of independent preparatory schools in the UK. Compared to UK primary schools, the curriculum seemed narrow – Hindi, English, Maths and ‘Environment’. On further investigation, it turned out that ‘Environment’ covered a wide range of subjects including science, history and geography. Admittedly, opportunities for scientific experiments seemed limited.

There is one additional subject being taught that rather caught me by surprise. Primary children in India, at this village school, at least, were also being taught economics. They begin with currencies and move outwards to related topics on how money is used.

On leaving the school, I felt that we may have rather more to learn from them, than they from us. Sixty years ago, close to 90 per cent of Singaporeans were uneducated and illiterate. They, now, top the international league tables of pupil attainment. The expansion of education in India, based on low cost, common-sense, traditional teaching methodology, common in Asia, is not starting from such a low base. As we prepare for post-Brexit free trade deals, we need to take note.