NewsPaperthe art of publishing
HomeNewsChris McGovern: Too many lousy state schools blight the Oxbridge hopes of...
5 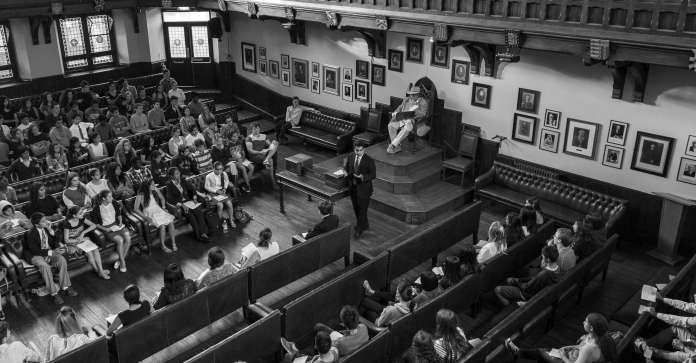 At the Cambridge Union’s first debate of term a few days ago, I proposed the motion that “This House believes that Oxbridge is a finishing school for the privileged.”  My central thesis was that a new privileged class – those who go to good schools, whether they be in the private sector or in the maintained sector – is replacing the stranglehold on privilege once held by private schools in Britain.

A ‘great divide’ is opening up between, on the one hand, good schools in both the maintained and independent sectors and, on the other hand, sub-standard schools, mostly in the state sector. If you are on the privileged side of this divide you are in a position to compete for a place at Oxbridge. Sadly, most of our children are being educated in the two thirds of state secondary schools that are either unable or unwilling to enter youngsters for Oxford or Cambridge.

This is, nevertheless, an improvement on the situation 50 years ago. Data collected for the 1963 Robbins Report on higher education indicated that even if you went to grammar school access to Oxbridge greatly favoured the privately educated. Only 27 per cent of entrants to Cambridge and 34 per cent to Oxford came from maintained schools. By the early 1970s state school entries had risen to 43 per cent. These days, on the surface, things seem much fairer with, roughly, a 60:40 split in favour of state school applicants.

Rather than being a vindication of the comprehensive school system, however, these figures probably reflect the considerable efforts of the two universities to recruit more state school students. Constrained by the insufficient number of maintained schools that will even engage in admission applications, the process continues to flounder. It is not made better by the fact that around 30 per cent of state schools applicants come from the tiny number of surviving grammar schools in the UK.

It seems that Oxford and Cambridge simply cannot find enough state school candidates who are deserving of a place. Even with the elements of positive discrimination that exist in the admissions process these days, privately educated pupils are five time more likely to win an Oxbridge place than those at state school and a hundred time more likely than state school children on free school meals.

This is not surprising in view of the comparatively poor performance of our state schools when judged against standards internationally. Given, however, that state school Oxbridge applicants are coming from only a third of such schools, the imbalance in application numbers between private schools and good state schools is much less marked than might be supposed. In addition, whilst only around 7 per cent of pupils attend private school up to the age of 16, this increases to 14 per cent for sixth formers.

That a ‘great divide’ exists within the maintained school sector is well recognised by those who have money and influence in our society, including our politicians. Tony Blair secured places for his sons at the prestigious London Oratory state school. Harriet Harman’s son attended a London grammar school. Both Michael Gove and David Cameron have sent their respective daughters to the outstanding Grey Coats Hospital state school. Jeremy Corbyn, by contrast, stuck to his ‘anti-selection’ principles and wanted to turn down the place his son had won at Queen Elizabeth’s Grammar School in favour of his local and failing comprehensive. His wife saw the value of a good school and divorced the aforesaid Jeremy.

Former grammar school boy, Sir Michael Wilshaw, the Chief Inspector, and a strong opponent of academic selection, had to admit in his latest annual report that too many comprehensive schools have a “demotivating culture” and a “worrying lack of scholarship”. There could scarcely be a clearer declaration of the ‘great divide’ amongst state schools.

In his recent speech to the Conservative Party Conference, the Prime Minister spoke up powerfully for social justice. I re-worked part of that speech for the Cambridge Union debate:

“The opportunity to win a place at Oxbridge doesn’t mean much to an able but under-privileged child if hypocritical politicians and the influential privileged classes can snatch away the places at the best state schools.

The opportunity to win a place at Oxbridge doesn’t mean much if your parents or carers can’t afford to buy a house in the catchment area of a good state school or pay for tutors to get you into the local grammar school and ensure you get top grades at A-Level.

There will never be fair opportunity with regard to winning an Oxbridge place without bridging the great divide between those privileged enough to go to a good school and those deprived of that privileged.”

I told the packed Union that by supporting the motion they would be voting for bright and intelligent youngsters like themselves but those who do not have a vote and do not have a voice and who never made it here.

My side’s case was roundly defeated by a vote of 3 to 2. Our clever opponents managed to persuade the chamber that the words “finishing school” in the motion had to be taken literally rather than metaphorically. There are some things it seems that outweigh “privilege”. I suspect that the outside world sees things rather differently but that the Union was prepared to engage in debate on the matter does, at least, offer some hope.

Highlights the debate can be watched here.