Clergy kneel to those who’d trample over them 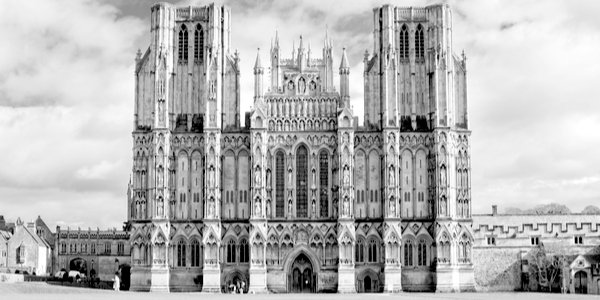 FOR some time now I have had a love-hate relationship with the cathedral in Wells, England’s smallest city, which has been my home for twenty years. I love the building, which never ceases to astonish, its scale, beauty and age dominating the town. I dislike, with a deepening intensity, the drip-drip of Leftist propaganda which has seeped into every service I have attended in the last two years.

In one Christmas address the dean referred to Mary and Joseph as refugees when of course they were nothing of the kind, as they were travelling to Bethlehem to pay the taxes demanded of them by Caesar Augustus. On other occasions the congregation has been subjected to the dean’s clear anti-Brexit bias and approval of mass immigration. However, irksome as all that is, what came to my notice on Saturday night sent me into apoplexy. I followed a link from James Delingpole on Breitbart to a piece on Wells News Hub headed ‘Bishops take the knee in Wells Cathedral in solidarity with Black Lives Matter campaign’. It pictured the Bishop of Bath and Wells, the Bishop of Taunton, the dean of Wells Cathedral and assorted other clergy kneeling in the otherwise empty nave in support of Black Lives Matter.

Last week I had written to the precentor of the cathedral about the address he gave during the Trinity Sunday service which I watched via YouTube. He not only referenced Black Lives Matter but he advised us, his almost certainly completely white congregation, to read Reni Eddo-Lodge’s book Why I Am No Longer Talking To White People About Race. Eddo-Lodge may have topped the best-seller charts but that does not make her or her views any less controversial. A radical Left-wing feminist, she is a proponent of the ‘all white people are guilty’ school of thought – a form of racism which Jordan Peterson denounces elsewhere in these pages today. It implies that when a black person does not get a job, a promotion, a scholarship or is arrested, it is down to an inherent racism on the part of white people. Though Eddo-Lodge is a highly successful young woman, she continues to wave her victim card as hard as she can while simultaneously demonising the millions of good-hearted, hard-working, tolerant men and women – of all colours and ethnicities – whose parents and grandparents fought in and suffered the deprivations of two world wars so that she and the generations that followed could have a free and unoppressed future.

The trigger for the current chaos and protests, as we are all too well aware, was the appalling death while being forcibly detained by police in Minneapolis of George Floyd, a man with a criminal record. But its focus on, and assumptions about, the persecution and killing of black men in the US is disingenuous, as American academic John McWhorter has set out on more than one occasion, most recently here.

As McWhorter points out, the killings of many white men by police do not make the headlines. Neither for that matter does Heather Mac Donald’s concern that with cops ‘backing off proactive policing in black neighbourhoods’, black lives are being lost to drive-by shootings at sometimes record rates. This denial of the facts is perhaps why the shooting and killing by a young black man of 77-year-old David Dorn, a retired African American policeman in St Louis, while he was trying to protect a friend’s store from looters, garnered only a tiny fraction of the publicity which has surrounded the death of Floyd. It certainly does not fit the story of systemic anti-black police brutality being promoted by the well-funded, increasingly powerful, Black Lives Matter organisation.

Archbishop Welby has said we should all ‘repent of our own part in racism’. He can speak for himself. I know no one who would say ‘I think racism is a good idea’ nor do i know of anyone brought up to think of racial discrimination or prejudice as anything other than bad or a sin. There can be so few people who would actively support the idea of the separation and different treatment of people based solely on the colour of their skin as to make the issue of racial discrimination a problem of different times. At least, that is what I used to think because now, under the banner of the Marxist, anti-capitalist, anti-white, anti-Semitic Black Lives Matter, that is precisely what a good number of acolytes of this most egregious organisation now believe. It grieves me deeply that clergy of the established church in this country, by showing support for such a movement, might encourage members of their congregations to follow their abasement at the feet of those who would trample over them and the Christian ethos given half a chance. There is only one being to whom the officiants of the Church of England should kneel, and that is God.